n recent years, a common refrain accompanying nearly every demand for newly invented “rights” has been: “It doesn’t affect you, so you can’t be against it.”

This claim—whether false or true, subjective or objective—has been played as the ultimate trump card.

If you could not point to a direct, immediate, and significant intrusion on your life, then your concerns—no matter how thoughtful and legitimate—were sacrificed at the altar of the New Regime.

On Wednesday, Alliance Defending Freedom filed a federal lawsuit on behalf of high school students and parents, asking the court to strike down a Minnesota school district policy that empowers a male student to enter the girls’ locker room and disrobe.

Not surprisingly, many girls have been distressed by the actions of the male student, which include twerking, grinding, and other sexually explicit actions. The response of the district and other authorities to the concerns has been a collective yawn.

This, along with recent actions by President Barack Obama’s Department of Education and Justice Department, illustrates the evolution of the push to manufacture special privileges for a select few.

The pretense that such demands don’t affect the lives of others now has been abandoned, replaced by two options: (1) get over it and get in line; or (2) be pushed to the margins of society, losing your reputation—and possibly your career—in the process.

In version 2.0 of the New Regime, even if you can point to a direct, immediate, and significant intrusion on your life, your opinion is irrelevant (and perhaps bigoted) when compared to “social progress.”

For example, when the New Mexico Supreme Court ruled that wedding photographer Elaine Huguenin and her husband Jonathan must set aside their freedom to peacefully live according to their faith, a concurring justice stated that the pair “now are compelled by law to compromise the very religious beliefs that inspire their lives.” Chillingly, the justice added that this compulsion “is the price of citizenship.”

As the situations in Minnesota, North Carolina, and elsewhere demonstrate, the latest test sites for this theory of “social progress” are locker rooms, showers, and other private changing facilities.

In what would have been an unthinkable battleground just a few short years ago, these tile-floored, plastic-stalled, chrome-fixtured, and (formerly) sex-specific sanctuaries are now ground zero for experiments in the subjective theory of gender.

And the wisdom of the New Regime 2.0 goes like this:

The march toward true liberty requires 18 girls to squeeze into a prison cell-sized changing space or abandon their bodily privacy, and their right to safety and comfort in the most intimate and vulnerable of settings.

Why? So that a “bearded individual” can fully disrobe in the girls’ locker room at a parks department swimming pool on New York City’s Upper West Side. Empowered by the mere proclamation that he is a woman, he appropriates the entire space for himself.

Use whatever analogy you want:

The New Regime has flushed common sense down the toilet.

The New Regime has pulled back the curtain and washed away any remaining vestiges of bodily privacy.

The New Regime has transformed locker-room peepholes into doorways.

The point is, the New Regime embraces the idea that individuals can stride with impunity into any private space they choose, regardless of biology. This dismissal of biological fact in bathrooms, locker rooms, and showers reeks of irony, in what may be the best example to date of the lengths to which the New Regime will go to impose its orthodoxy.

These spaces, perhaps more than any other physical location, exist for and because of biological differences. Bathroom doors easily could have been labeled as the kid in “Kindergarten Cop” would have it, but decorum prevailed and we used “men” and “women” instead.

Separate locker rooms for men and women do not symbolize a sinister effort to force anyone’s conformity with “gender stereotypes.” They exist because men, women, and children should not be forced to encounter the opposite sex in private spaces or be viewed by the opposite sex while in various stages of undress.

There are reasonable solutions. There are ways to accommodate men and women and boys and girls who struggle to align their subjective beliefs with biological realities.

It is an acknowledgement that neither the men’s or women’s restroom is an ideal solution in such circumstances. The same fact holds true for individuals who do not personally feel comfortable entering the private space that corresponds to their biology.

These accommodations protect the privacy of all individuals, not just a select few at the expense of everyone else.

Reasonable solutions are available that protect everyone from unwelcome bodily exposure. But under the New Regime, “social progress” trumps reason.

If the young man who intruded into the girls shower had ended up dead on the floor, what would have been the reaction by the police and school officials? 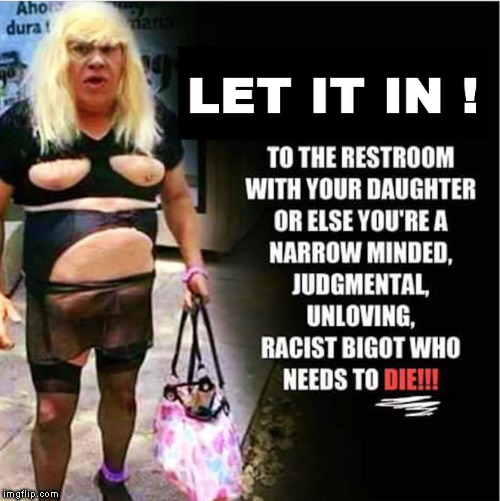 Alt right commenter said a few weeks ago about the "Conservative" movement:


"If you can't even keep men in dresses out of little girls' bathrooms, then what the hell are you "conserving?"

This gender thing the past year is a clear demonstration of the utter failure of conservative "leadership" the past 30 years.

Guess there aren’t any good ol’ boys at that school to straighten out the little perv. I don’t think for a minute any bearded fool actually thinks he is a woman. Just a dumb kid who thought he’d get a peek and get to flash the girls. The guys in school should beat the snot out of him. I’m sure the girls would appreciate it.

Change the signs on bathrooms and locker rooms to Penis and Vagina. Then it doesn’t matter what you think you are or how much you hate your genitalia, just compare what is in your pants to the sign on the door. This is what they’ve forced on us, but it is the only way to end the nonsense (and to make them find new nonsense to force on us).

Agreed.... And if we don't something very soon, it's going to get even worse...

This looks like an opportunity for 18 girls to conduct a little locker room sex reassignment surgery and who then saw nothing.

The folks who have had surgery will get around this one too.

From Wikipedia, on the Civil Rights Act of 1964:

One of the most damaging arguments by the bill's opponents was that once passed, the bill would require forced busing to achieve certain racial quotas in schools. Proponents of the bill, such as Emanuel Celler and Jacob Javits, said that the bill would not authorize such measures. Leading sponsor Hubert Humphrey wrote two amendments specifically designed to outlaw busing. Humphrey said "if the bill were to compel it, it would be a violation [of the Constitution], because it would be handling the matter on the basis of race and we would be transporting children because of race." While Javits said any government official who sought to use the bill for busing purposes "would be making a fool of himself," two years later the Department of Health, Education and Welfare said that Southern school districts would be required to meet mathematical ratios of students by busing.

It has to be said that there were legitimate grievances behind the Civil Rights Act of 1964: segregation in the South at that time was no joke if you were black and traveled and actually expected to, you know, eat and stuff. So in 1964 I was conflicted; those people needed and deserved accommodation, on the one hand - and OTOH the proposed act was not constitutional. I still don’t know the right answer, but IMHO those who feel dependent on that act should shape up and confront those who are parodying their legitimate concerns. Back in 1964 the argument for the Act was that blacks (negroes, as the polite term then was) could not help having a distinctive appearance on the basis of which they were discriminated against. I put it to you that any distinctive appearance of an LGBT person is strictly voluntary; the electorate, nay the Congress itself, would have never supported the act if its modern incarnation had been put before it. Eventually the moral authority of the 1964 law, and its judicial extensions, must stretch too thin.

SOME writers have so confounded society with government, as to leave little or no distinction between them; whereas they are not only different, but have different origins. Society is produced by our wants, and government by our wickedness; the former promotes our happiness POSITIVELY by uniting our affections, the latter NEGATIVELY by restraining our vices. The one encourages intercourse, the other creates distinctions. The first is a patron, the last a punisher.

Society in every state is a blessing, but Government, even in its best state, is but a necessary evil; in its worst state an intolerable one . . . - Thomas Paine, Common Sense (1776)

Socialists are cynical about society -and naive about government.

Excellent article. I think the new regime is the Gaystapo.

They should put single uni-sex (or two) in places where multiple people gather, like theaters. Explain it does away with heteronormativity.

Distinctions is what LGBTWTF is demanding, and that they be worshipped.

>>The folks who have had surgery will get around this one too.

My concern is to keep the pre-op trannies and the perverts who “just woke up feeling like a woman today” out of the wrong bathrooms. The post-ops have to have some place to go.

“Not surprisingly, many girls have been distressed by the actions of the male student, which include twerking, grinding, and other sexually explicit actions”

What the girls could have done in response is to point at his “thing”, laughed, and make jokes about its tiny size. He will never want to go into the girls locker room or bathroom ever again.

They don’t agree with that although it makes sense.it doesn’t further their agenda which is the destruction of Western, Judeo Christian Civilization.

That is, let's continue to preach tolerance but behave as they do -- Tolerate only that which we agree with and bully anyone who doesn't agree with us ... especially if they're on the Left.

If they have had the surgery and no one can tell they aren’t now a woman, it won’t come up like you say.

But if a woman complains that a man who everyone can tell is a man is in the changing room or bathroom, I’m not sure it should matter to a business owner if the guy has actually been cut up or not. A woman customer has complained that a dude is in there with girls, and that’s the bottom line. The business owner should be able to decide who the hell uses his own women’s exclusive areas, no matter what. And that decision shouldn’t be forced by the state to accept anyone just because they are mentally ill and also mutilated.

When the perv undresses, twerks, and grinds in the girls’ dressing room, the girls simply need to record it all on their camera phones.
And post it on youtube.
And let the perv file suit for “bullying” and invasion of “her” privacy.

The court of public opinion will settle the case.