The GOP’s electoral-map problem is not about Trump. It’s about demographics.
Washington Post ^ | May 8, 2016 | Chris Cillizza

Republicans have a major electoral-map problem in November. Major.

Donald Trump’s victory last week in Indiana’s primary not only effectively sealed the GOP nomination for the real estate billionaire but also brought into sharp relief how difficult it will be for any Republican to get to 270 electoral votes and beat Hillary Clinton to become the 45th president this fall.

Start here: Eighteen states plus the District of Columbia have voted for the Democratic presidential nominee in every election between 1992 and 2012. Add them up, and you get 242 electoral votes.

But he needs serious voter turnout to vote for him.

Any R or "conservative" not supporting and voting for Trump is effectively voting for Hillary and the Democrat party.

And with all the illegals coming in the demographics will continue to change in the dimoKKKRATS favor. This may well be out last chance to do something about it.

Been here saying this forever....demographics are destiny. Trump needs to park himself in PA, Michigan & Virginia this cycle. Also go after Nevada & Iowa & Nevada as a backup if PA falls through.

Down the road, yes, so timing is very important.

The American Left has imported millions of new voters.

And conservatives sat on asses and let them.

Thank God we have the moral high ground. With that and some good feelings, we got jack in the future. :)

Re-running the last election is a sure way to lose.

“What that means in practical terms is that if Clinton wins the 19 states that every Democratic nominee dating to her husband has won and she wins Florida (29 electoral votes), she wins the White House. It’s that simple.”

Yup. And there’s no way Cruz or Kasich or any other republican was going to beat Hillary in FL.

Trump got more votes than her in the primaries and it’s his second home.

“If anything, Trump has a chance to win more states than another R nominee would. “

Exactly. Trump is the only one who can take some of those 19 states from Hillary.

Ha, don’t go after Nevada twice. Should be Iowa, Nevada & Maine....doing this with the understanding Trump carries Florida & Ohio again, which I expect. He has to go all in for the Rust-Belt this cycle. I don’t trust PA, but he’s got an outside shot at it. I think he has a better shot in Michigan.

Well I was told by the so-called conservatives—15 years ago- how great “robust” immigration was for the cause.

I was told that Mexican illegal immigrants are pro-life and are a natural fit for the Republican party. I was also told that they would never be Democrats because Blacks are overwhelmingly Democrat and the two interest groups don’t get along.

Let’s face it, whereas many white votes are split, these non white voters are racist and vote as a racial group. It’s not the GOP’S fault it’s the wall of racism they are facing. The GOP tried for many years to ignore trace and speak to people as Americans. It’s not conservatives who have a religious or racial test, it’s the left. That’s the harsh reality.

Well, we might have stopped an abortion or two

Unfortunately even if Trump wins in 2016 and 2020, Demographically we are still screwed.

Only hope is parts of the country secede while the Liberal/third world part falls apart and hopefully we have another Justinian come along that’s doesn’t get stopped by a plague this time around.

You can be sure that Demonicrat corruption and fraud will be infecting every precinct ballot machine or box they can get hold of.

I know what we can do -- we can post another seven or eight or topics about how the demographics and/or the Electoral College dictate that we will have another Demwit POTUS starting in 2017.

Off-topic tidbit -- Eisenhower was the first Republican president since Ulysses S. (Hiram Ulysses, really) Grant to be elected to two terms in his own right (iow, not as VP succeeding the POTUS dying in office) and serve them out.

1) Except in the very odd/exceptional election year of 1964, the Dems haven’t cracked 50% of the whites in a Presidential election since 1932.

2) Once the ‘64 election was over, the Dems understood that they would never win another Presidential election again unless the Republicans REALLY screwed up...or unless they changed the electorate in a dramatic way.

3) The Dems, courtesy of Bobby Kennedy who wrote the law, and Teddy Kennedy who pushed it in the Senate, passed the 1965 Immigration Act. That law dramatically reduced immigration from our then-traditional large sources of immigrants - England, Ireland, Holland, Germany, etc. - and replaced them with vast numbers of Turd Worlders...whom everyone knows vote around 80% for Dems, and will continue to do so for the rest of their lives, as new immigrants have traditionally done.

4) As a result of the ‘65 Act, and due to the Dem’s outright lying in ‘86 regarding an effective (or any) fence, there are now probably 30 - 40 million illegals in this nation. Note that the (probably low-ball) figure in 2005 was 11 million...we have 2-3 million come in every year, so simple math says that the number is actually somewhere between 31 and 41 million). If any substantial portion of these people ever become citizens, then the Dems will have accomplished a complete shift of the electorate, and will be virtually invincible on the national level. Every state will become like California, both politically and economically - which is to say, overwhelming Dem and broke. But at least if you don’t like California now, you can leave for a better place without much trouble - where are you going to go if EVERY state is like that?

5) Every Republican, and every Conservative voter MUST UNDERSTAND that if such a state of affairs comes to be, NO OTHER ISSUE WILL MATTER AT ALL, because we will ALWAYS AND FOREVER lose on those issues. Immigration is THE issue of this election, and this election is as critical as the 1860 election was - and for the same reason, because it will determine whether this nation continues on as it has existed in the past, or becomes a new and unrecognizable entity that simply occupies the same geographic territory.

Please wake up, and help others to do so by sending them this post (or recommending “Adios America” to them). It really is THAT important.

I think Hispanics voted 40% for GWB at one point didn’t they?

What happened to that? Or did the Hispanic electorate change too?

18 posted on 05/08/2016 5:57:20 PM PDT by Utmost Certainty
[ Post Reply | Private Reply | To 1 | View Replies]
To: Innovative
Any R or "conservative" not supporting and voting for Trump is effectively voting for Hillary and the Democrat party. 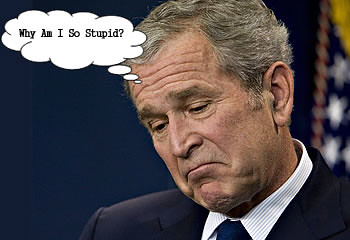 They didn’t sit on their asses and let them. They helped them!!! Always thinking if they were nice enough they’d vote for them. How’d that turn out?!?!