"Donald Trump, I don't believe, is going to be the party's nominee," Bush told "Fox News Sunday." "And if he is, he's going to get crushed by Hillary Clinton. I wanted to point that out."

And Romney is the only one who will win.

1) Except in the very odd/exceptional election year of 1964, the Dems haven’t cracked 50% of the whites in a Presidential election since 1932.

2) Once the ‘64 election was over, the Dems understood that they would never win another Presidential election again unless the Republicans REALLY screwed up...or unless they changed the electorate in a dramatic way.

3) The Dems, courtesy of Bobby Kennedy who wrote the law, and Teddy Kennedy who pushed it in the Senate, passed the 1965 Immigration Act. That law dramatically reduced immigration from our then-traditional large sources of immigrants - England, Ireland, Holland, Germany, etc. - and replaced them with vast numbers of Turd Worlders...whom everyone knows vote around 80% for Dems, and will continue to do so for the rest of their lives, as new immigrants have traditionally done.

4) As a result of the ‘65 Act, and due to the Dem’s outright lying in ‘86 regarding an effective (or any) fence, there are now probably 30 - 40 million illegals in this nation. Note that the (probably low-ball) figure in 2005 was 11 million...we have 2-3 million come in every year, so simple math says that the number is actually somewhere between 31 and 41 million). If any substantial portion of these people ever become citizens, then the Dems will have accomplished a complete shift of the electorate, and will be virtually invincible on the national level. Every state will become like California, both politically and economically - which is to say, overwhelming Dem and broke. But at least if you don’t like California now, you can leave for a better place without much trouble - where are you going to go if EVERY state is like that?

5) Every Republican, and every Conservative voter MUST UNDERSTAND that if such a state of affairs comes to be, NO OTHER ISSUE WILL MATTER AT ALL, because we will ALWAYS AND FOREVER lose on those issues. Immigration is THE issue of this election, and this election is as critical as the 1860 election was - and for the same reason, because it will determine whether this nation continues on as it has existed in the past, or becomes a new and unrecognizable entity that simply occupies the same geographic territory.

Please wake up, and help others to do so by sending them this post (or recommending “Adios America” to them). It really is THAT important.

Are there people left who still haven’t figured out that the Bushes are a crime family? And have been for about a century?

The Catholic bishops have collaborated with the Democrats at every stage of the plan.

The bishops supported the destruction of the inner cities by the federal government, where Catholics were concentrated. Efforts by Catholics to preserve their ethnic, Catholic neighborhoods were labeled “racist” by the Democrats and the bishops.

The Pope is doing all he can to keep the West asleep, throwing around accusations of “racism” to stigmatize all resistance to the Jihad invasion.

As Rush as stated, if Trump can’t beat Hillary, and if Trump is beating Bush, why does Bush think he can beat Hillary?

Newsflash to Jeb!: No Republican can win the general election without strong conservative support, which you would never have. Plus, Trump has a shot at attracting blue collar white union workers who would otherwise vote Democrat. Jeb! has no more chance of attracting crossover votes than Romney did. Sorry Jeb!, your dream will never come true.

Jeb has a future as political prognosticator. Perhaps he will get hired by some teeeeveeee show after he drops out. /sarc

Dear Jebbie...about those really cool things you could be doing...

Jeb certainly knows a thing or two about getting crushed.

Here’s Jeb’s problem..... When I read the headline “Bush: Trump would ‘get crushed ‘by Hillary”....... my first thought is why would George Bush comment on the campaign? It takes a while for me to even remember that Jeb is running. He’s irrelevant.

16 posted on 01/03/2016 7:52:26 AM PST by Grammy (Save the earth... it's the only planet with chocolate.)
[ Post Reply | Private Reply | To 1 | View Replies]
To: jimbo123
I wonder if Jeb, son of former CIA director G.H.W.B., had any connections to the CIA & Bill Clinton's Arkansas cocaine smuggling out of Mena airport to support the anti-communist Nicaraguan contras?

I wonder what's out on world wide web?

There's a reason G.H.W.B. claims Bill Clinton is like a son?


You might want to mention that was because Johnson was only in office for a year and Johnson got a lot of sympathy votes from the assassination of JFK.
18 posted on 01/03/2016 7:52:58 AM PST by Kid Shelleen (Beat your plowshares into swords. Let the weak say I am strong)
[ Post Reply | Private Reply | To 3 | View Replies]
To: jimbo123

Read Jeb's lying lips...if you can find them. 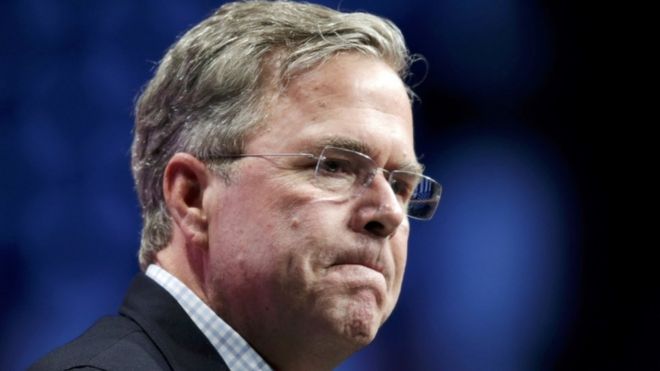 Dropping out is an “act of love,” Jeb! Just go away.