Including senior judges and lawyers from across the world, the three-day conference on “Climate Change and the Law” was staged in London’s Supreme Court. It was funded, inter alia, by the Supreme Court itself, the UK government and the United Nations Environment Program (UNEP).

The purpose of this strange get-together was outlined in a keynote speech (visible on YouTube) by Philippe Sands, a QC from Cherie Blair’s Matrix Chambers and professor of law at University College, London. Since it is now unlikely that the world will agree in Paris to a legally binding treaty to limit the rise in global temperatures to no more than 2 degrees C from pre-industrial levels, his theme was that it is now time for the courts to step in, to enforce this as worldwide law.

“The most important thing the courts could do,” he said, was to hold a top-level “finding of fact”, to settle these “scientific disputes” once and for all: so that it could then be made illegal for any government, corporation (or presumably individual scientist) ever to question the agreed “science” again. Furthermore, he went on, once “the scientific evidence” thus has the force of binding international law, it could be used to compel all governments to make “the emissions reductions that are needed”, including the phasing out of fossil fuels, to halt global warming in its tracks.

The fact that it could be seriously proposed in the highest courtroom in the land that the law should now be used to suppress any further debate ... speaks volumes about the curious psychological state to which the great global warming scare has reduced so many of the prominent figures who today exercise power and influence over the life of our Western societies.

Is it a criminal offense to tweet 'Kill All White Men'?

But under his breath he muttered, “It’s not getting warmer.”

Wow, so the science is lacking in every way, but because we believe anyway, it needs to be codified into LAW to FORCE OUR VIEWS ON YOU!

If the science cannot stand on it’s own merits, is it science?

This is Western Civilization collapses. The very idea behind this conclave is a rejection of every aspect of the Enlightenment, and they damn well know it.

This is medieval shit - straight up.

6 posted on 10/12/2015 3:40:13 PM PDT by smartyaz
[ Post Reply | Private Reply | To 1 | View Replies]
To: RightGeek
Galileo apparently failing to impress at his Inquisition. At the time, 97% of scientists were certain that the sun went around the earth and the earth was the center of the universe.

The more stuff changes, the more stuff stays the same. Global Warming is the new religion and Al Gore, soon to be replaced by Prince Obama, is the GW Pope. 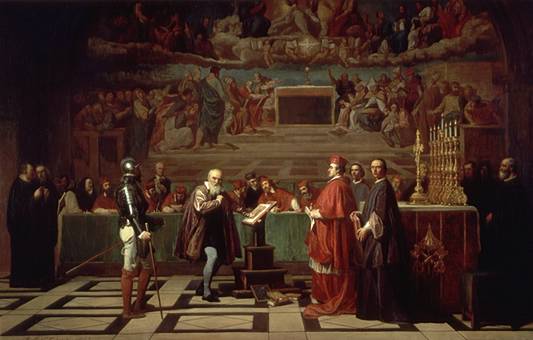 How about we stop our governments giving money to the UN

Just watch Trump.
When he starts selling his ocean front property because of high water, I will pay attention.

2. The sun is a ball of fire that controls the climates of all its planets.

3. The earth is one of the sun’s planets.

4. The earth is a speck in comparison to the size of the sun.

5. Inhabitants of the earth are less than specks.

Study Question: How do less-than-specks in congress plan to control the sun?

The global climate could stay about the same for the next hundred years, it could get warmer, or it could get colder. Most people in the developed world instinctively prefer that it be warmer - or about the same as it is now - rather than cooler, so “global warming” as proved a hard sell. And we were all taught as kids that the ultimate fate of the earth will be a deep freeze as the sun eventually cools, so anything that staves off that day is welcomed rather than feared.

That was brought home to me recently as I was looking at a globe of the earth at my mother's house. There are VAST areas of the earth where there is basically nobody.

What is needed right now is for a list of the attendees to be released. Identifying the conspirators involved is the first step to stripping them of any authority or office. 14 posted on 10/12/2015 3:54:34 PM PDT by 2ndDivisionVet (TED CRUZ. You can help: https://donate.tedcruz.org/c/FBTX0095/)
[ Post Reply | Private Reply | To 4 | View Replies]
To: RightGeek
"The whole aim of practical politics is to keep the populace alarmed (and hence clamorous to be led to safety) by menacing it with an endless series of hobgoblins, all of them imaginary."

Global warming zealots remind me of those cult nut jobs who worship aliens and think that a ship is going to come down to take them to space/heaven so they put on their best sneakers and drink the poison Kool-Aid.

Even if an if age came these global warmist f**ktards would be trying to sacrifice people on top of the glacier rolling over New York City.

18 posted on 10/12/2015 4:02:53 PM PDT by abclily
[ Post Reply | Private Reply | To 16 | View Replies]
To: RightGeek
The waiters were turning back to their work. One of them approached with the gin bottle. Winston, sitting in a blissful dream, paid no attention as his glass was filled up. He was not running or cheering any longer. He was back in the Ministry of Love, with everything forgiven, his soul white as snow. He was in the public dock, confessing everything, implicating everybody. He was walking down the white-tiled corridor, with the feeling of walking in sunlight, and an armed guard at his back. The long-hoped-for bullet was entering his brain.

He gazed up at the enormous face. Forty years it had taken him to learn what kind of smile was hidden beneath the dark moustache. O cruel, needless misunderstanding! O stubborn, self-willed exile from the loving breast! Two gin-scented tears trickled down the sides of his nose. But it was all right, everything was all right, the struggle was finished. He had won the victory over himself. He loved Big Brother.

They’ll succeed right after they carry out that “Round Pi to 3.0 law.”