As the calendar slips toward the lazy, hazy, crazy days of summer, there’s a storm cloud hanging over America that will release its thunder in late June.

That’s when the U.S. Supreme Court is widely expected to declare a constitutional right to same-sex “marriage.”

We are at a moral precipice. America’s Founders could scarcely have imagined a handful of people in black robes becoming so powerful and arrogant that they could defy natural law with the stroke of a pen. The question is: Will they do it?

The drive to radically redefine marriage didn’t happen overnight. It’s the rotten fruit of the sexual revolution’s march through the institutions, along with 50 years of court rulings that pushed atomistic individualism at the expense of the family.

In his monograph “The Supreme Court of the United States versus the American Family,” the late Michael Schwartz noted: “While our legal system was maintaining the fiction that individuals were the only reality, we were living the truth that individuals are all members of families and that families are the real components of society.”

With the culture cut loose since the 1960s from its Christian underpinnings, Schwartz wrote, “the radical individualism that had been latent within our official legal structure is no longer held in check, no longer meets with the healthy resistance that had moderated and humanized it, and it is operating today in a fashion that is radically opposed to family solidarity.”

If the court decides the way I think it will decide, I expect to see Polygamy pursued before the end of 2015. Probably in Massachusetts.

yes the 19 sixties when movies like the robe, ben hur, and the Ten Commandments stopped being made for the most part. I’m 47 but love a lot of the oldies

This statement tells the tale:

the culture cut loose since the 1960s from its Christian underpinnings

Beginning with the Pilgrims, “Christian underpinnings” were what America was all about. Without which underpinnings, America will be no more. The supremes who make up this court are the ones we will point afterwards, as the ones who brought America down.

I'm concerned that they'll take one look at Ireland and be copycats.

The redefinition of marriage was imposed by
Mr. Mitt RomneyCARE (GOP, carpetbagger everywhere).
The MASS Constitution FORBADE him from doing so,
BUT Mr. RomneyCARE was from NH, Mich, Utah and Mexico,
so adios Constitution. 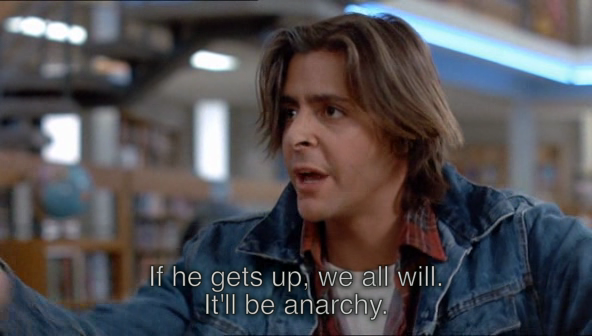 “We are at a moral precipice.”

We plunged over the precipice long ago.

We just haven’t hit the ground yet.

We will, bet the farm on it.

Of course SCOTUS will do it. It will then be more incumbent on decent people than ever to point out that even if sin is made legal, it’s still not right.

This is the hill to die on. Remember that God is always a majority of one.

You’re wrong about “America will be no more.” It already is no more. Good luck to all the Christian people. We are going to need it.

The fall is fine, except for the last 12 inches.

Or in my case, four inches.

Cultural Marxists who marched through ALL the institututions-—and the American public schools first after the “universities” destroyed the minds and worldview of our children.....and with the sodomite control of “entertainment”-—you know—those producers who were raping the Corey boys and whom Corey Feldman stated were all pedophiles——wanted to flip Good and Evil in our children....so children were targeted (with their plastic minds) and parents gave up parenting and let the minds of their children be formed by perverts, and Wundtians (operant conditioners) who will make children (adults) so irrational they will actually believe “snow is black” (Fichte 1810)

This is intentional to make “happy slaves” (Ferguson type minds/worldview)-—to destroy the ability of critical thinking (removal of Classical Education in the 1930s) so all Traditions and all Truth/God could be literally ERASED in all children.

Their minds are filled with mush and hypersexualized to make them “emotional” and only able to “feel” things....with NO high level of cognitive function.

When their minds only are filled with Lies and Misinformation they literally CAN’T think-—and will believe whatever their masters (pop culture/Hollywood) states.

Our press has been equivalent to Pravdas for almost a century and as Solzhenitsyn stated in ‘78, Americans “think” they are given the “truth”. But no, they are fed lies to “progress” them into total slavery.

The “school” system (Prussian) is to brainwash and condition children to be dependent (emasculated) and incapable of self-initiative—autonomy....they are incapable of being like a Ben Franklin because of very little human interaction in a Free Real Life situation which is ONLY the Natural Family—Children are now programmed with perversion and artificial screens, ALL controlled by artificial means-—ALL to program dependence and Big Brother always watching (artificial institutions now with cameras and gates/fences.) There can be NO Reason when a child isn’t exposed to the Real World Life experiences with their biological role models-—which gives them meaning and connection to the past and future and includes ALL people so they can grasp Natural Law (Common Sense).

When Virtue is destroyed in children, civil society collapses and Freedom is not possible (Socrates). Normalizing the Vice of sodomy “for the children” will warp children’s perception of the World and Reality and Truth/God-—and flip 3000 years of Ethics and literally flip good and evil and normalize a tribal Afghani Worldview (where little boys are in harems.).

All “Justice” systems have to promote “public virtue”. Sodomizing others is always a vice and is beyond dysfunction and a vile, dehumanizing, irrational use the body. There is no “Right” to sodomize others-—and no “Just Law” can promotes such a pagan, Satanic use of the body.

All Rights in the USA are “Natural Rights from the Creator” and includes the Natural Right of children to not be bought and sold and intentionally separated from their biological parents—Natural Rights of children only exists in true marriage. Destroying Right Reason in law is not possible.

All human beings have the Natural Duty to raise and nurture their own genetic offspring.....a Justice system has to protect ALL Natural Rights-—not Satanic, perverted base urges.

The so-called enlightened ones not only have turned against the moral issue of it but also the scientific/biological aspect.
How can two of the same sex ‘marry’?
Can joining two plugs produce electricity? Can two sperm cells joined together create a new life? History will not only show the unwise immorality of gay ‘marriage’ but that its proponents were utter,willfully ignorant morons.

It’s easier to accept gay marriage nowadays, because contraception and abortion allowed marriage, sex and procreation to be separated from each other.

Also, no-fault divorce allowed much divorce and re-marrying, with a significant number of these unions, no doubt, being bereft of kids.

“Restrict marriage to man-woman because of kids? Lotsa married people don’t have kids!”

17 posted on 05/25/2015 9:03:29 PM PDT by Tolerance Sucks Rocks (Brian Moore was an exemplary cop. Let his conduct be the example for Baltimore police to follow.)
[ Post Reply | Private Reply | To 16 | View Replies]
To: Tolerance Sucks Rocks
We are at a point when rational thought and truth are to be replaced with what the state dictates as reason and truth

You DESTROY a culture from the inside..

Marriage will no longer have value or meaning other than uniting whoever wants to for whatever time they choose. Ending it will be perfectly acceptable under any conditions or reasons. We’re pretty much there already. All that “glue” that once kept people together is no longer wanted nor needed, for the expectations of what Marriage actually was intended for are gone. The same can be said for children. They are no longer protected in our country nor the sanctity of life in general. So it’s no wonder marriage is no more than an expensive dress up show for an audience to attend.