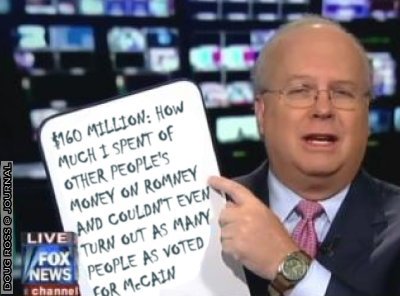 Funny, Mitch does not have this attitude to Harry and Barry. He is always finding new and improved ways to accomodate their demands. When Harry says jump, Mitch asks how high.

On your desktop, right click on the file and hit print. Then simply cut it out of the page with scissors.

163 posted on 11/23/2013 3:12:44 AM PST by LesbianThespianGymnasticMidget (God punishes Conservatives by making them argue with fools.)
[ Post Reply | Private Reply | To 46 | View Replies]
To: Star Traveler
Senate Minority Leader Mitch McConnell said on a conference call organized by Karl Rove’s Crossroads organization for large donors and their advisers on Oct. 30 that the Tea Party movement, in his view, is a “nothing but a bunch of bullies” that he plans to “punch … in the nose.”

This report turned out to be false.

I heard that McConnel while looking so meek is vicious,nasty politically in his campaigning...don’t write this guy off for not being really dirty in the campaign.

The word “bully” has been emptied of its meaning. By definition, a bully has to have more power than his victim. The dems and the Rinos are the ones in power.

That and the fact that he's soft on "comprehensive" immigration reform is why I don't support him anymore despite many good things he's done.

I'm also not trying to bring him down, just not supporting--especially for President.

"Hold the enemy by the nose, and kick him in the pants."

McConnell showing more anger towards members of his own party than the Democrats. Typical beltway RINO.

Gee, sounds just like a liberal Democrat. Too bad this RINO sh**head couldn’t do that with the Democrats. But the media wouldn’t give them the green light on that. Enjoy your berth on the Titanic, Steve.

Being chinless and spineless is no way to go through life, Mitch.

I’d punch him in the chin, but he doesn’t have one.

175 posted on 11/23/2013 9:45:32 AM PST by Cyber Liberty (We're At That Awkward Stage: It's too late to vote them out, too early to shoot the bastards.)
[ Post Reply | Private Reply | To 1 | View Replies]
To: Star Traveler
The irony of course, is that McConnell and the GOP-e are always looking to "reach across the aisle" and accede to the bullies on the Left, rather than take a bloody nose once in a while to fight for principle. I think that Ted Cruz & the Tea Party are far better-equipped than the current leadership to dish it out as well as take it. "If you can't take a little bloody nose, maybe you ought to go back home and crawl under your bed. It's not safe out there. It's wondrous, with rewards to satiate desires both noble and gross. But it's NOT for the timid."
~ Paraphrase from Q to French Cap't Picard, Star Trek:TNG -- 'Q Who?'
176 posted on 11/23/2013 12:12:08 PM PST by mikrofon (Founders BUMP)
[ Post Reply | Private Reply | To 1 | View Replies]
To: Star Traveler

This is why the donks/libs will always win. ALWAYS win. The GOP and Tea Party are FAR more interested in destroying each other than they are in stopping the libs. The donks/libs have absolutely nothing to worry about.

177 posted on 11/23/2013 12:26:39 PM PST by chessplayer
[ Post Reply | Private Reply | To 1 | View Replies]
To: chessplayer
yES, the "Republican Establishment" (by that , I mean entrenched politicians) are torn between loyalties; I.E., to their masters who pull their strings OR their constiuents.

the democRATs dont have that problem because their useful idiot constituents are in line with their tyrannical pupeteers, not so with the republican voter who has no representation

I especially dont like it because it is also bad politics for the people he is trying to win over. He needs paleoconservatives.

I think it is also bad for the general election if he wants to appeal to working people in Ohio and Iowa. As well as blocking Hilary in Kentucky and WV.

I hope this asshole tries this on me. please...