On Nov. 15, the Senate Armed Services Committee had unanimously approved S. 1867, the National Defense Authorization Act, which includes a provision to repeal Article 125 of the Uniform Code of Military Justice (UCMJ).

Article 125 of the UCMJ makes it illegal to engage in both sodomy with humans and sex with animals.

It states: "(a) Any person subject to this chapter who engages in unnatural carnal copulation with another person of the same or opposite sex or with an animal is guilty of sodomy. Penetration, however slight, is sufficient to complete the offense. (b) Any person found guilty of sodomy shall be punished as a court-martial may direct.”

“It’s all about using the military to advance this administration’s radical social agenda,” Perkins told CNSNews.com. “Not only did they overturn Don’t Ask Don’t Tell, but they had another problem, and that is, under military law sodomy is illegal, just as adultery is illegal, so they had to remove that prohibition against sodomy.”

“Well, whether it was inadvertent or not, they have also taken out the provision against bestiality,” he said. “So now, under the Uniform Code of Military Justice (UCMJ), there’s nothing there to prosecute bestiality."

Former Army Col. Bob Maginnis said some military lawyers have indicated that bestiality may be prosecutable under another section of the military code of justice – the “catch-all” Article 134 for offenses against “good military order and discipline.”

But don't count on that, he said.

“If we have a soldier who engages in sodomy with an animal – whether a government animal or a non-government animal – is it, in fact, a chargeable offense under the Uniform Code? I think that’s in question,” Maginnis told CNSNews.com.

He added: “Soldiers, unfortunately, like it or not, have engaged in this type of behavior in the past. Will they in the future, if they remove this statute? I don’t know.”

Perkins said there was no attempt to remove the UCMJ repeal provision from the bill, which Perkins had expected the Senate to approve.

Now that it has passed, however, the Senate version will have to go to a conference committee, and Perkins predicts there will be several sticking points with the House.

“The House in their version of the defense authorization, reinforced the Defense of Marriage Act, saying that there is a military DOMA as well, prohibiting same-sex marriage on military bases – something the Department of Defense is pushing for,” he said.

“And now this is an added concern, that sodomy has been removed, and as we have discovered, that bestiality--the prohibition against it--has been removed from the Uniform Code of Military Justice. So yes, the House will have problems with this bill.”

TOPICS: Crime/Corruption; Culture/Society; Editorial; Extended News; Government; News/Current Events
KEYWORDS: bestiality; deathofthemilitary; doma; evil; gomorrah; homosexualagenda; interspeciessex; marryahorse; military; moralabsolutes; senate; sexualsin; sexwithanimals; socialistgoverment; sodom; sodomy; ucmj; zoophiles; zoophilesoldiers; zoophilia Navigation: use the links below to view more comments.
first 1-20, 21-40, 41-60, 61-74 next last
REPUBLICANS THAT VOTED FOR THIS BILL WILL PAY THE PRICE. I WILL WRITE THEIR NAMES DOWN, AND EVERY CHANCE I GET, I WILL PUT THEIR NAMES OUT THERE, AND CONSTANTLY REMIND THE CON/REPUBLICANS, WHAT OUR LOVELY, CARING REPUBLICAN SENATORS HAD VOTED ON, IN THE MONTH OF CHRISTIAN HOLY, HOLIDAYS.

PS. I WOULD APPRECIATE ANY AND ALL HELP FROM FELLOW REPUBLICANS/CONSERVATIVES TO SPREAD THE WORD. LET'S NOT ALLOW THESE LOSERS, THE OPPORTUNNITY TO HIDE THIS CRAP, IN THE HOPES THAT THEIR "STUPID CONSTITUENTS" WILL SOON FORGET !

Chill out on the nonstop caps. It’s hard on the eyes, and irritating.

So what's next? A Congressional Medal of Honor for Jerry Sandusky?

I WILL PUT THEIR NAMES OUT THERE, AND CONSTANTLY REMIND THE CON/REPUBLICANS, WHAT OUR LOVELY, CARING REPUBLICAN SENATORS HAD VOTED ON, IN THE MONTH OF CHRISTIAN HOLY, HOLIDAYS.

I like that but from experience, people are very forgiving. Look how they are giving Newt a pass for all his mess ups. I don’t think this will be very successful. The Republicans who passed this (who I don’t know yet) will do something great and all will be forgiven. It is so frustrating!!!!

We have truly stepped through the looking glass here - my head is about to explode.

Similar ratio to Sodom and Gomorah before God's judgement.

I would assume the bestiality was to cover the CIC and Moo!

“(a) Any person subject to this chapter who engages in unnatural carnal copulation with another person of the same or opposite sex or with an animal is guilty of sodomy. Penetration, however slight, is sufficient
to complete the offense.

(b) Any person found guilty of sodomy shall by punished as a court-martial may direct.”

(1) That the accused engaged in unnatural carnal copulation with a certain other person or with an animal. (Note: Add either or both of the following elements, if applicable)

(3) That the act was done by force and without the consent of the other person.

(a) Article 125—sodomy (and offenses included therein; see subparagraph (3) below)

(b) Article 134—assault with intent to commit sodomy

(a) Article 134—indecent acts with another

(1) By force and without consent. Dishonorable discharge, forfeiture of all pay and allowances, and confinement for life without eligibility for parole.

(2) With a child who, at the time of the offense, has attained the age of 12 but is under the age of 16 years. Dishonorable discharge, forfeiture of all pay and allowances, and confinement for 20 years.

(3) With a child under the age of 12 years at the time of the offense. Dishonorable discharge, forfeiture of all pay and allowances, and confinement for life without eligibility for parole.

(4) Other cases. Dishonorable discharge, forfeiture of all pay and allowances, and confinement for 5 years.

Um, we just did this yesterday.

Generally speaking Congresscritters are all slugs. This nation has become a Banana Republic. It's quit worthless to fight the system to only end up with the next slug.

I do believe our politicians have officially lost their minds.

If they would only step back and let the economy purge and heal itself we might still have a country left. Instead they cram these immoral laws down our throats and regurgitate phrases like “create jobs” of which they can not actually do because for government to create one job it has to take money from the taxpayer, thus realistically the taxpayer created the job because without the money the job would have been impossible to create.

When society deems something appropriate or just as a whole then it will become the standard and way we function as a society, so stop forcing this crap on us!

America has become the bottomless pit. We are a nation void of morals and standards. The Taliban and other terrorist groups are no worse than what we have become sad to say.

we are probably just lucky it doesn’t legalize pedophilia... then again the UCMJ makes it a crime to have sex with anyone under 13 I think.or is it 12?

This country is swirling the drain.

It sure as hell is irritating on the eyes, scotsman!

Just to clarify, the CURRENT Article 125 equates heterosexual oral sex with bestiality. It DOES need to be updated so that married couples engaging in oral sex are not criminals. 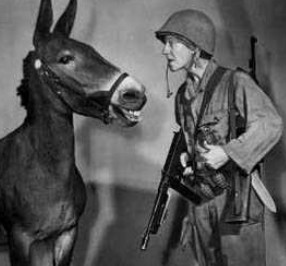 Whatdya mean ya got a headache?