Officials in Idaho County want Gov. C.L. "Butch" Otter to declare an ongoing disaster that will allow wolves to be shot on sight, citing attacks on livestock and wildlife.

County commissioners declared a local disaster Thursday. The governor's office was aware of the county's move but had not seen it and couldn't immediately comment, said Otter spokesman Jon Hanian.

Can we do the same thing with Democrats?

When long necked prey like deer are predated into scarcity, count on cougar turning to livestock, pets, and people.

I do hope your wife is always armed, and hopefully never alone.

Hmmmn - Could we infer from your post’s mention of hydatid disease that Democrap Syndrome (DS)is a result of a hyperparasite infecting a human host which is not evolutionarily adapted to CNS infections?

If so, this might offer a cure for DS. Imagine a world where a dose of an antihelminthic would turn urban social parasites back into productive humans.

43 posted on 09/22/2010 6:21:12 AM PDT by GladesGuru (In a society predicated upon freedom, it is essential to examine principles,)
[ Post Reply | Private Reply | To 35 | View Replies]
To: GladesGuru
We have had mountain lions in town (Pocatello/Chubbuck) intermittently over the last 10 years. Sometimes they go "hunting" down the canals that are routed between backyards. That gives them easy access to the yards and pets. The most recent case in Chubbuck involved a mountain lion under the porch of a home near Reservation Rd and Yellowstone Ave. Animal control managed to remove it. We often have moose, elk and deer walking around town, so there is "wild" food available in addition to pets and people. Some livestock too as there are still farms with cows, sheep and horses scattered around town.

My wife isn't always armed, but she has the option to do so. She works as a police dispatcher, so often has armed officers very nearby.

It looks to me like if the states with real wolf problems don’t start getting cooperation from the federal judicial system and the enviro nutjobs the states are going to act on their own.

I wouldn’t blame them a bit and in fact hope it comes to pass. The feds and enviro’s are not the ones suffering from the crazy reintroduction of these killing machines.

The lawyers and eco-nuts make millions $$$ from lawsuits against the feds.

The feds easily roll over ... giving away our tax money.

The elitists ALWAYS know better than the people who 'only' live there... 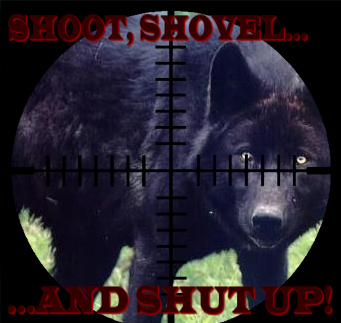 I believe yes and other issues

Sure looks like it. Another textbook example of the problem(s) created when the federales stick their nose in places it doesn't belong. Once again I studied Art 1, Sec 8 of our Constitution to determine which of the enumerated powers this dog and pony show falls under. Lo and behold; NOTHING there! It's fairly apparent I lack the mental acuity necessary to discern the nuances that emanate from the document.

But we all know this three ring DC circus is not really about saving the hooty owls, farting darters or whatever the endangered species du jour. It's all about the feral government using a touchy-feely false premise of saving the ________________(fill in with appropriate cute baby seal or other class of creature) to wrest power from the states and the people.

Ping for an interesting read when you get back. It’s worth clicking the link to read the whole, short article.

For full disclosure I like wolves as well, I am just calling out the hypocrisy, I will be very disappointed in Ashley if I do not hear she is headed that way as we speak.

Exactly. What is so hard about understanding that?

Had an uncle who worked at a national park that declared the rattler an "endangered species." Got a call from the campground one day that one of those noisy serpents was running amongst the campers.

He showed up. Killed it. One of the campers said, "That's an endangered species."

“Just read Lewis and Clark’s journals and put the elk and grizzlies back on the plains near St Louis where they were. Then maybe the American people would wake up. “

It’s amazing to think that just 200 years ago more than 1/2 the country was still an untamed wilderness.

57 posted on 09/23/2010 7:27:27 AM PDT by Rebelbase (Political correctness in America today is a Rip Van Winkle acid trip.)
[ Post Reply | Private Reply | To 21 | View Replies]
To: Myrddin
I didn’t bother to purchase a hunting license last year or this year. There are many very experienced hunters in town with all the “toys”. They have been coming home empty handed.

What the wolves are doing to hunting is an intended feature of their introduction, as far as the Left is concerned.