There is much more to the fact that President Obama now polls lower than President Bush did at fifty days into his presidency than merely what bi-partisan pollsters Schoen and Rasmussen were able to point out this week. In nearly every category of performance, President Obama has adeptly demonstrated that he is in over his head, and sinking fast. "We the people" sense his inability to make sound decisions and thusly, the President has wiped out nearly all of the Republican support he enjoyed not long ago, and Independents are not far behind.

When you consider the sector of the Democratic base that thinks raising taxes on everyday working people is bad, you even begin to see a schism in his base not previously thought to be possible.

Seriously, in nearly every category of governance he has messed up royally, and is clueless, or wantonly stubborn to do the things that will fix any of the problems. At the end of the day something will change. President Obama will formulate new policies, or "We The People" will use a shepherd's staff rather easily in 2012.

In my syndicated column and on my blog, I have been tracking the number of campaign promises that he has broken. Yet many of these don't even rise to half the level of importance on the issues that "We The People" are growing increasingly concerned about.

On the economy, the unemployment numbers have skyrocketed in the opposite direction, escalating especially hard following the signing of his stimulus plan. The plan, according to leading ecconomists, that only dedicated roughly 3% of the total amount towards actual job creation. On this point Warren Buffet, one of President Obama's strong supporters in the campaign, expressed grave reservation.

One of the great lies that President Obama continues to try to perpetuate is to say that "going green" would jump start economic growth. At the same time, he restated in his address to Congress what he had said on the campaign trail: that no family earning less than $250,000 would see an increase in taxes. Yet every family in America is going to pay additional tax under his cap and trade program. By essentially punishing "evil big business" for carbon footprints, the feds claim they will tax said "evil" businesses to show them who's boss. Oddly enough, those "evil" businesses will never feel the sting because they will pass the cost of the imposed taxes on to the consumer in the form of higher prices for simple things like electricty, natural gas, and whatever forms of energy they may use.

On foreign relations he spoke loud and long about removing embarrassment from the reputation of the United States to our allies. He prompty begins his administration by giving the very first sit down interviews to networks run by our enemies. He then thrice insults Great Britain, our closest ally of all. He is left with major distance between his wishes and those of Israel, our closest ally in the mid-east. And topping it off, this past week his administration dealt with Brazil, our closest ally in South America, with the same kind of "White House gift shop" hospitality he had just kicked Great Britain in the knees with.

On national security Chavez has taunted him, North Korea has threatened him, Iran has burned him in effigy, and Russia, Cuba, and Venezuela are plotting ways to put Russian long range bombers in our hemisphere and directly off our coast.

On terrorism Iran, Al Qaeda, and bin Ladin are openly laughing at him. Maybe his giving Hamas -- a terror group, on the international terror watch list -- 90 million dollars, wasn't quite the bold stroke of genius his cabinet told him it would be.

Most importantly by a margin of 12% the American people believe the stimulus will only help and unfairly benefit those who have already been irresponsible.

Every single one of the actions described and taken in this piece are actions connected directly to Obama. Remember, a clear majority of Americans thought any form of stimulus help should have come primarily through reducing the tax burden, not saddling it up for rides into the sunset.

We've heard the word "crisis" roll off the lips of the administration like syrup in recent days.

But now, President Obama has one of his own. His policies are failing in every direction. "We The People" are worried.

So for a man who campaigned on change, why not start practicing what you preach Mr. President?

I guarantee that there will be a plethora of sellers if the Dow gets anywhere near that valuation in the next 20 days. If it comes about that you are near right, I predict that ten days later, the Dow will be lower than it is now.

Sadly I had to look up Maidas, and you’ve nailed it on the head.... 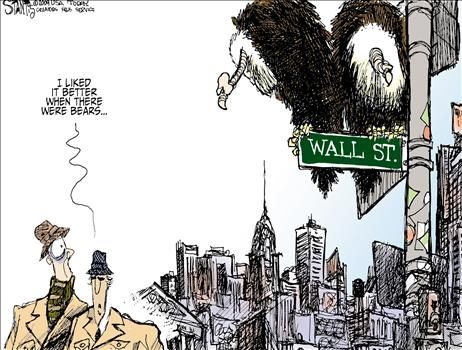 43 posted on 03/15/2009 11:51:56 AM PDT by ding_dong_daddy_from_dumas (I want to "Buy American" but the only things for sale made in the USA are politicians)
[ Post Reply | Private Reply | To 40 | View Replies]
To: 2ndDivisionVet
"President Jimmy Carter without the gravitas and managerial experience."

You are far too kind to both.

Or until he loses a Democratic majority in Congress.

46 posted on 03/15/2009 7:34:09 PM PDT by madameguinot (Our Father's God to Thee, Author of Liberty)
[ Post Reply | Private Reply | To 9 | View Replies]
To: Captain Peter Blood
My guess is that last week was a Bear Market rally of sorts but none of the fundamental problems have been solved nor has the bad debt been expunged from the system.

AIG reports profit and BAC says they expect to earn $50 billion before taxes this year.

That could happen also, but 2 years is a very very long time under these conditions.

Obama's all over change. He changes his mind as often as his teleprompter lets him.

Bingo. I might even restate that as "...until he loses his puppetmasters in Congress."

I don't think so. That barrier has been shattered and will make it easier for blacks to be elected potus. The electorate, however, won't get sucked into the "magic negro" myth ever again.

Hugo Chavez has announced that Venezuela would allow ally Russia to use a military air base on La Orchila, a Caribbean island in Venezuelan territory.

I’ll suggest two sources of variance between Rasmussen and other pollsters:

2. I don’t know about you, but I’ve been polled several times in the last four years. Every time I’ve been called, the pollster has clearly had an accent or diction that tell me that they’re a) black and b) from the east coast and c) a young adult. I don’t know what their political affiliation is, nor did they ever make noises or responses that would tell me what they thought. But it was quite abundantly clear that they were black, not white, hispanic or asians calling.

Consider the “guilty white liberal” who doesn’t want to offend any black people — if they’re being called by the same polling outfits I’ve been called by (which included polls for GOP primaries, BTW), are these guilty white Volvo-driving, latte-sipping liberals going to be critical of Obama to a live pollster?

With Rasmussen, you know you’re being polled by a robot. It is a clearly automated voice. Now you’re no longer worried about offending someone on the other end of the phone.

So not confuse Obama with a black American. He is a white child of privilege, born into an affluent family, whose mother so hated America that she left it.
He wears black when he needs to.