The Bombay Stock Exchange will suspend its trade after a dip of 9.7%

BOMBAY (India) - The Bombay Stock Exchange in India has suspended trading Tuesday after a dip of 9.75% at the opening in the wake of other places in Asia, she said.

The index of thirty major Indian values, the Sensex, lost 1.716,71 points to 15.888,64 points when the transactions were automatically halted for at least one hour.

The Bombay Stock Exchange had already unscrewed Monday, down 7.41% at the close, its largest decline ever recorded for a meeting.

The Awards Asia suffered further losses monumental Tuesday in the meeting, still haunted by the fear of a recession in the United States, major customer for Asian exports, and the consequences for the entire world economy.

The Asian markets had already experienced a black day Monday, contaminating the European places which have cashed their biggest declines since the attacks of September 11, 2001 in the United States.

Tomorrow’s gonna be a fugly day on Wall St, seems like.

IMO, this all stems from the reaction to the failed loans with balloon payments that are now coming due, that many are defaulting on.

If that’s off base, take me to task for it.

What this causes me to do though, is get quite angry at the supposed experts who thought this was going to fly in the first place. What a bunch of idiot sticks.

Amazing...the downfall of the world economy, the fault of the US again...we are so influential these days.

Down 11.7% immediately before circuit breaker popped.

i was talking with mortgage types in the fall. they were saying then, that the lenders were making the requirements extremely high.. holding back loans that were good risk... the net result being that homes would sit longer on the market, freakin the sellers, causing a drop in prices... etc

part of me thinks it’s a bit too conveniently timed.. and i wonder if the clinton political machine is driving to create the ‘sky is falling’ scenario in order to unseat the incumbent party.

dems have shown numerous times they don’t care how many get hurt in their quest for power.

When we sneeze they catch a cold... so what happens when we take a dump on the world?

This sounds like full scale panic selling. Looks like tomorrow is going to be bad in the US, this on top of a drop of over 2000+ pts in the Dow since mid-December already. Could the Dow drop 1000 in a single day? 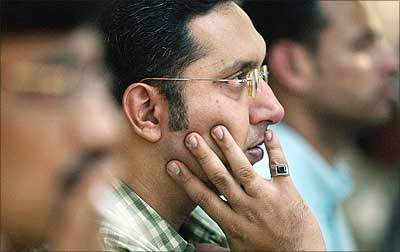 Dump? What you think those packaged products of mortgages were? Man, not an export nation, yeah right boyyyy? One tainted container ship of lead based Mattell GI Joes, for an envelope worth billions in ready to write down US Sub Prime. Fair Trade!

The Plunge Protection Team is certainly going to have its hands full tomorrow.

12 posted on 01/21/2008 10:03:09 PM PST by Rockitz (This isn't rocket science- Follow the money and you'll find the truth.)
[ Post Reply | Private Reply | To 8 | View Replies]
To: sten
and i wonder if the clinton political machine is driving to create the ‘sky is falling’ scenario in order to unseat the incumbent party.

Its common knowledge that Clinton and his minions control the World Economy.

I think that while the Dems are pleased that economic conditions make their winning this fall that much more likely, that it is absolutely impossible for any such little people to have this large an influence on markets. That just isn’t how things work. Lots and lots of people made really bad financial decisions all along the chain of value, and now its going bad. But falling markets are NOT the end of the world. For people with cash, its what they’ve been waiting for.

It is going to be Bombs Away on Wall Street on Tuesday.

Two guys in the back must have been short

While this would obviously be true in most cases, I wouldn't bet on it given the leading candidates on the Dem side. I mean seriously, if the economy is faltering are voters really going to put their faith in Hillary over, say, Mitt Romney?