"San Francisco FBI located him," Schadler said, and Colorado G-men and local cops made the collar.

St. Mary's spokesman Pete Smarr told the Daily News, "Norman Hsu was traveling on an Amtrak train when he became ill. Amtrak personnel called an ambulance when the train stopped in Grand Junction and had him transferred to St. Mary's Hospital. He is currently in the hospital under federal custody. He is in fair condition."

A spokesman for Hsu seemed suprised by news of the arrest last night. "I haven't been in contact with him for a couple of days," said spokesman Jason Booth. "I'm happy he's been found."

Hsu had been scheduled to appear in a San Francisco court Wednesday to turn over his passport and ask a judge to halve the $2 million bail he posted last week. That's when he had finally turned himself in after spending 15 years ducking sentencing on a felony theft conviction. But Hsu failed to show up at the bail reduction hearing and a judge issued an arrest warrant for him.

TOPICS: Crime/Corruption; Front Page News; Politics/Elections; US: New York
KEYWORDS: clinton; democrats; hillary; hsu; noitsnumberseven; threadnumber5 Navigation: use the links below to view more comments.
first 1-20, 21-40, 41-60, 61-80 ... 221-222 next last
This report seems to have some detail ....going way back to the original charge over a decade ago.....

Victims swindled by Hsu seethed yesterday at his misdeeds.

Hsu got sick on the train - wonder if they found any polonium?

Any medical folks able to comment on this? I believe that "fair", "good", "stable", "critical", et al have fairly well-defined boundaries, and my dim recollection of reading about car accidents &c over the years is that "fair" is a whole lot less good than "good".

Note the date on the fundraiser invitation, September 30, 2007.
Tickets are going fast, so RSVP soon!

That is a good question....but it was in California and he has friends....

I thought for sure he’d been “Fostered” by the Klintonistas.

Maybe he needs to be on suicide watch when they send him back to jail awating trial. We wouldn’t want him to mysteriously “hang himself” in his jail cell.

Polonium Sushi can do that to a guy.

One wonders if he was fleeing to avoid prosecution or to avoid a Clinton campaign induced accident.

Governor is giving away money he got from fundraiser...Hsu...

HARRISBURG, Pa. (AP) Another Democrat is giving to charity the money he got from a disgraced fundraiser.

The announcement from Pennsylvania Governor Ed Rendell comes a day after the fundraiser, Norman Hsu, skipped a bail hearing, prompting a judge in California to issue a new warrant for his arrest.

Last week, Rendell had said he planned to keep the nearly $40,000 he got from Hsu who was already wanted for failing to appear for sentencing on a 1991 grand theft charge. Rendell said he would return the money if prosecutors won a "sustainable conviction" in the case.

He now says although Hsu is still a friend of his, his "failure to appear casts a new light" on the original case. So, he's giving the donations to charity.

In 1991, he pleaded no contest to grand theft charges in San Mateo County that would have given him three years in state prison.

Hsu was charged with running a ponzi scheme, telling investors he sold latex gloves manufactured in Asia, imported by a company called “Just Gloves” with offices on the Peninsula.

The address turned out to be a post office box.

Hsu said his company “Unigoal” operated from an apartment on Second Avenue in San Mateo.

15 posted on 09/07/2007 9:15:40 AM PDT by calcowgirl ("Liberalism is just Communism sold by the drink." P. J. O'Rourke)
[ Post Reply | Private Reply | To 1 | View Replies]
To: Ernest_at_the_Beach
Guess the Clintoon thugs have gotten fat/sassy and out of practice. Apparently, their last free meal for a Boy named Hsu didn't work, and he only got sick. During the 1980/90's, the Clintoons got by with murder, rape, campaign finance abuse, Arkancide, treason and other crimes due to their buds controlling the MSM. Welcome to the new century, Clintoon criminals. You can't hide your criminal activities anymore. 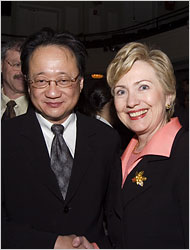 Hill's memories of HSU will be fading quickly to "I Don't Recall!" HSU'S HSU re getting illegal money from you know, HSU!

Disgraced political fund-raiser Norman Hsu - a major donor for Hillary Rodham Clinton and other Democrats - was a wanted man again after he failed to show up for court yesterday, and a judge issued a new warrant for his arrest.

Hsu, whose criminal past has roiled the campaigns of presidential candidates, was scheduled to ask a judge to cut in half the $2 million bail he posted last week when he turned himself in after spending 15 years on the lam from a felony theft conviction. According to investigative blogger Flip Pidot (suitablyflip.com), who delved into public records and crunched the numbers, Clinton took the lion's share of political cash ($174,000) from Hsu and his network of suspected donor-bundlers whose campaign checks dwarfed their income. New York Attorney General Andrew Cuomo and New York Governor (and former Attorney General) Eliot Spitzer accepted the largest sums of direct cash from Hsu. ($60,100 each)

“... “Norman Hsu was traveling on an Amtrak train when he became ill. Amtrak personnel called an ambulance when the train stopped in Grand Junction and had him transferred to St. Mary’s Hospital. He is currently in the hospital under federal custody. He is in fair condition.”...”

Anyone bet that he dies mysteriously in jail?
It’s a Clinton favorite.

The Amtrack train was seen speeding AWAY from Ft. Marcy Park at a high rate of speed.

He’ll be dead soon and therefore unable to answer any questions.