It's been fun talking with you Joy, I think we exhausted this thread though. Have fun and GOODLUCK with your upcoming rally!

Our troops risk death as they defend us from our enemies in war zones and we owe it to them to defend them from their enemies back home. When the wounded troops showed up last Saturday (and nearly doubled our group's size) I was surprised to see them, and angry that they felt the need to come out and defend their brothers and sisters in arms from their fellow citizens. That is our job as citizens and beneficiaries of their sacrifices.

My cancer diagnosis a couple of years ago brought alot of things into focus... our time in this world is limited. And we each have a choice to make regarding how we spend that time. I decided to spend my time doing something - rather than talking about doing something - about the things that are important to me.

Sitting on the sidelines while: lefties protest unopposed as they blame our country for terrorism, the MSM covers only bad news in Iraq and ignores the progress being made, and while both mentioned entities insinuate and outright accuse our troops and our president of being war criminals, is just not an option for me.

I don't know why I'm even responding to you. All you want to do is re-fight an old grudge match, and it doesn't matter to you what you use in that fight. I want people to stop and think, and to decide what is important to them. If a ball game on TV is what's important to them, fine; they should stay home and watch the ballgame. But if the war on terrorists and our soldiers is important to them, they better make some choices about how they are going to show their support. Time is running out for all of us.

Neither do I. You never add anything to the discussion except a three hanky rant. That may work on the emotionally weak minded but most of the people here on FR have a mind of their own.

And please, quit acting like your the only one who is patriotic, supports the troops or has been through a life threatening situation. Your self righteousness is beginning to bore me.
603 posted on 01/31/2007 9:30:38 PM PST by Bob J (RIGHTALK.com...a conservative alternative to NPR!)
[ Post Reply | Private Reply | To 602 | View Replies]
To: Bob J; trooprally; kristinn; Doctor Raoul

So many conservatives have work or school Mopnday through Friday, with Saturday and Sunday off, and live in the South and the Midwest, particularly places like Texas, Missouri and Oklahoma.

But they'd be there. and that's the point. Once you can get that concept into your head, it's all in the way we choose to spin it.

"Oklahoma City should have told Clinton and the Democrats that we are vulnerable to terrorism! But what happened? They did nothing. Clinton kept fooling around with Monica Lewinsky, and the result was a truck bomb in the Air Force barracks in Saudi Arabia, car bombs at our embassies in Africa, and another bomb on the USS Cole."

"Democrats cannot and will not protect America. When it comes to national security Democrats are brainles, gutless and spineless."

ALL - I'm usually up at 5AM, worked out in the cold weather during the morning hours Wednesday, cut, hauled, and stacked a third of a chord of wood for the coming snow and started working on the Olney, MD AAR. I stopped reading FR before Bob J responded to my post to him. Then it was time to call it a day.

The Olney AAR is now up and I finally had time to read FR.

The above quote is from Post No. 590, and it is calling me a "lackey" for not responding quick enough.

But in reading all of the posts starting at No. 573, I'm now glad that I did not have time to respond to someone with obvious ill feelings towards FR.

I hope the Olney AAR lifts your spirits and dulls the negative diatribe from Bob J.

Bringing the cancer issue up at all and wearing "support the troops" on your sleeve like some kind of medal while calling anyone who doesn't heed your call to rally a traitor, is disgusting. Bringing MCM into this like his condition is an ace up your sleeve for you to use when it benefits you is also disgusting.

We all have sensitive personal issues, most of us don't parade them around on public bulletin boards shamelessly using them as a tool to elicit emotional appeal.

Do you have no shame?

Who paid for the buses, I don't know. But it was a weekend. Most people do not work on the weekend. Plus many of them were students.

611 posted on 02/01/2007 3:40:54 PM PST by El Gato ("The Second Amendment is the RESET button of the United States Constitution." -- Doug McKay)
[ Post Reply | Private Reply | To 24 | View Replies]
To: kristinn
Why are FReepers required to argue with secular fanatics to defend Vets? I admire the Vets but I think they're the ones who have misplaced loyalties believing the protesters were rational, civil and support public debate and liberty.

Those "anti-war" protesters are nothing of the sort. They are anti-democracy and anti-Iraq protesters. They do not support a free and democratic Iraq and use the violence of Iraq's insurgents to diminish support of the Iraqi government.

It doesn't say a thing about what you have to put up with, or what you can or have a duty to do.

Well, when they get serious let me know because I'll be under the bed.

A modest suggestion for a better response to "serious" leftist traitors. 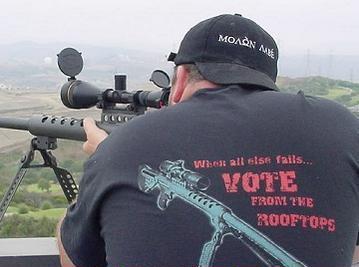 A hundred miles is less that two hours, most of the time. I go farther than that to go to my dentist. (No lie, my wife goes even farther, more like 6 hours, even though we have the same dentist, long boring story.)

Since people seem to be venting, I have my own “issue.” While viewing a video of the moonbats last weekend, one scene struck me…. It was a young fellow who stopped, and stared transfixed at our FReepers. He looked to be college age, fairly well groomed, and he just paused and watched for a minute or two with a confused expression. I found myself wishing someone could have spotted him, and extended a hand across that fence. Who knows? Maybe he was willing to learn.

I’d love to see one facet of FR embark on a massive, country wide effort to teach our youngsters the fundamentals of constitutional government, civics, etc, BEFORE they end up in the streets with the hippies.

Most kids today are bombarded with leftist lies from the day they step foot into public school. They’re brainwashed by the NEA, and then they receive their advanced degrees in socialism from college, and we’re not doing anything to correct it. There is a tremendous void that needs to be filled, IMO.

It seems to me that FR is so busy running around putting out brush fires (read: protests/rallies) that we never have time to get a real foothold on the playing field. We’re trying to convince young adults to join “our side” and they don’t have a clue as to what we stand for.

Why can’t we start community networking workshops for kids… Places where they can learn to apply the correct information. Clubs or study groups in our homes. Or just mentor one kid. Give them the tools to stand up to all the lies they hear. Teach them to love this country like we do. Teach them to be proud of their heritage for a change! (And of course do this in tandem with our other activities.)

I’d like to see FR take the lead. Start planting seeds that will germinate and grow kids into good citizens who can carry on the battle. Maybe FR could dedicate an area for teens to come and ask the questions their teachers can't or won’t answer. Teens love to rock the boat so why don’t we give them some ammunition to do so?

Why can't we be Proactive sometime instead of always having to be Reactive??
And yes, I'm already doing it.

How long before they start aping chimps (even more) and start flinging poo? That too happened the last time they were in full bray.

These people had better get a grip on the following idea: We are not letting this happen again. I'll hang out at the dang airport if I have to.

Some people can, some people can't. Personally, for something like this, I might go 100 miles. My point is more that it's lame for people to say they can't do it (without a truly valid excuse) if they live 5 to 20 miles away.

Doesn't matter, if the MSM and the scummy leftist, and not a scummy RINOs as well, can portray it as representing the American people, the effect will be the same.