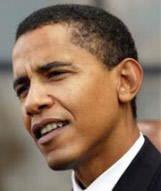 Many months ago, readers began asking me whether Barack Obama is Muslim. Since he identifies as a Christian, I said, "no," and responded that he was not raised by his Kenyan father.

But, then, I decided to look further into Obama's background. His full name--as by now you have probably heard--is Barack Hussein Obama, Jr. Hussein is a Muslim name, which comes from the name of Ali's son--Hussein Ibn Ali. And Obama is named after his late Kenyan father, the late Barack Hussein Obama, Sr., apparently a Muslim.

And while Obama may not identify as a Muslim, that's not how the Arab and Muslim Streets see it. In Arab culture and under Islamic law, if your father is a Muslim, so are you. And once a Muslim, always a Muslim. You cannot go back. In Islamic eyes, Obama is certainly a Muslim. He may think he's a Christian, but they do not.

Then, there are the other items in his background. As best-selling author Scott Turow wrote in Salon, Obama went to a Muslim school for two years in Indonesia. His mother, Anna, married an Indonesian man (likely another Muslim, as Indonesia is Muslim-dominated and has the largest Islamic population in the world).

And Obama has a "born-again" affinity for the nation of his Muslim father, Kenya, and his Kenyan sister. (Although Kenya is largely Christian, it has a fast-growing Muslim population that has engaged in a good deal of religious violence and riots against Christians. And Kenyan courts will apply Sharia law, when the participants are Muslim.) Wrote Turow:

Obama's father died in a traffic accident in Nairobi in 1982, but while Obama was working in Chicago, he met his Kenyan sister, Auma, a linguist educated in Germany who was visiting the United States. When she returned to Kenya in 1986 to teach for a year at the University of Nairobi, Obama finally made the trip to his father's homeland he had long promised himself. There, he managed to fully embrace a heritage and a family he'd never fully known and come to terms with his father, whom he'd long regarded as an august foreign prince, but now realized was a human being burdened by his own illusions and vulnerabilities. So, even if he identifies strongly as a Christian, and even if he despised the behavior of his father (as Obama said on Oprah); is a man who Muslims think is a Muslim, who feels some sort of psychological need to prove himself to his absent Muslim father, and who is now moving in the direction of his father's heritage, a man we want as President when we are fighting the war of our lives against Islam? Where will his loyalties be?

Is that even the man we'd want to be a heartbeat away from the President, if Hillary Clinton offers him the Vice Presidential candidacy on her ticket (which he certainly wouldn't turn down)?

Barack HUSSEIN Obama is an apostate Muslim. He was educated in madrassas in Hawaii and Indonesia from an early age, up until high school.

His natural father and namesake, a Kenyan Muslim, was associated with one of the most corrupt and violent organizations in Africa, the Mau Mau of the Kenyatta regime. He divorced Barack's mother when Barack was two years old, according to Moslem law. Barack's mother remarried, another Muslim and took Barack to Indonesia, the most densely populated Islamic country in the world.

When his mother divorced her second Muslim husband, she and Barack returned to Hawaii where he attended high school.

Later, he attended Columbia University where he majored in political science then worked for Business International for a year and then was a community organizer at a Chicago housing project. It was during his time spent there that Obama joined the Trinity United Church of Christ.

Obama was a Muslim for over twenty-five years.

In his 1995 memoir, "Dreams from My Father," Obama admits to using marijuana and cocaine. At one time he ran his credit cards up so high that the credit card company denied him access to further use of his card.

He supports homosexual marriage, racial preferences, gun control, socialized medicine and the absolute right to abortion, including partial-birth abortions. He is anti-war, voted against the reauthorization of the USA Patriot Act and opposes the death penalty and school vouchers,

He has said he loves Jimmy Carter and is the 18th most liberal member of the Senate, receiving a 100% rating from Americans for Democratic Action, NARAL Pro-Choice America, National Organization for Women, the NAACP and the National Education Association.

America will never elect an uber-liberal, apostate Muslim and self-admitted drug user to the Office of the President of the United States.

I wouldn't know about his family and don't particularly care, but there's something about him that I haven't trusted from day one.

Doesn't much matter, the Hillary long knives are out and now the attacks begin.

6 posted on 12/19/2006 5:29:46 AM PST by edcoil (Reality doesn't say much - doesn't need too)
[ Post Reply | Private Reply | To 5 | View Replies]
To: Beckwith
America will never elect an uber-liberal, apostate Muslim and self-admitted drug user to the Office of the President of the United States.

That's not the impression I got when reading his first book

"America will never elect an uber-liberal, apostate Muslim and self-admitted drug user to the Office of the President of the United States."

They wouldn't elect a draft-dodging, fornicating, drug using, lying bum from Arkansas, either. ;)

He gives me the creeps, the way Bill Clinton does.

I am with the Muslims on this, I think Obama is a Muslim too.

I don't want to offend any UCC freepers but isn't this one of the most liberal Christian denomonations out there? I remember going to a Baptism there once and the minister did hold up a piece of bread and say that some thought it was God and some didn't and either was okay, come and take communion or something like that. My reaction was that it either was God or it wasn't and if it was something left open by the minister, then it wasn't. weird.

Yes, creepy is the word.

Just think, Ray Nagin and William Jefferson. If those two clowns can get re-elected, Obummer would be a shoe-in.......

You are correct. They are darn near Unitarian.

16 posted on 12/19/2006 5:37:26 AM PST by ConservativeMind
[ Post Reply | Private Reply | To 12 | View Replies]
To: Beckwith
America will never elect an uber-liberal, apostate Muslim and self-admitted drug user to the Office of the President of the United States.

If he looks good and has good communication skills, that's all that seems to matter to the general public.
17 posted on 12/19/2006 5:38:42 AM PST by reagan_fanatic (A liberal is a suicide bomber without the guts)
[ Post Reply | Private Reply | To 2 | View Replies]
To: radar101
He probably was raised as a Muslim. But, I don't think it's good idea to attack him as 'former Muslim' when he has confessed to be a Christian now. There are a lot of other things that would disqualify and prevent him from being a presidential/vice presidential candidate. Let's not focus much on what he was, but on what he is.

I'm not sure Hillary would choose him as her running mate. There are two things that against him to be chosen as Hillary's running mate:

2. Obama is a senator from IL. Hillary was also from Illinois, and it's unlikely Obama would win any Southern state. Since blacks will vote for a Clinton anyway, him being black wouldn't be a real advantage.

I would what the Islamic penalty is for a Muslim converting to Christianity....

His voting positions are so liberal versus Muslim sensitivities that he would grotesquely offend the most conservative Muslims.