Jose Vicente Carrasquero, manager of the campaign command of the opposition candidate, announced that next Wednesday Manuel Rosales will present his government plan in the matter of citizen security, while later he will expound upon ideas in matters of housing construction and about the treatment the military sector will have which, he put forth, will be strictly attached to that which the Constitution forsees.

In a press conference, accompanied by the ex candidate for the presidency of the republic, Roberto Smith (Venezuela First Party), Carrasquero explained that, according to data shown by recent regional polls, Rosales has managed to surpass the serving Chief Executive in the electoral preference in the states of Zulia, Lara, Falcon, Tachira, Miranda, Carabobo, Apure, Delta Amacuro y Amazonas.

"We are pleasantly surprised," he said, that the "numbers are near those of Chavez in [the state of] Vargas" and that a "technical tie" exists in [the states of] Bolivar and Guarico. In the concrete case of the state of Miranda, the spokesman stressed the rebound, especially in the municipality of Sucre (Petare).

Asked about the effect which the fear of reprisals may have on the results and the trustworthiness of the surveys which put Rosales in first place, Carrasquero said that the technical aspects [of the polls] are maximized, so that those questioned do not fear to express their true intention of voting.

He stressed that the rebound of Rosales is a product of the direct contacts which Manuel Rosales has carried out with more than 200,000 people in 39 cities (16 states), in a trip that has taken him more than 168 kilometers.

He insisted upon the importance which the plan against crime has, since one must put the brakes on "the shame of this government which has been incapable of articulating an efficient plan" against the [criminal] underworld.

TOPICS: Extended News; Foreign Affairs; News/Current Events; Politics/Elections
KEYWORDS: 2006; chavez; election; hugochavez; hugoping; hugotrans; manuelrosales; polls; rosales; stjtranslation; venezuela Navigation: use the links below to view more comments.
first 1-20, 21-40, 41-53 next last
Tossing down poll results among Freepers is like feeding raw meat to zoo animals; we know how to tear them up. The fact that the polls were conducted by the opposition candidate's campaign leads us to think that there is an attempt to spin the results in their favor; the absence of hard numbers, which may be the newspaper's fault, does not encourage us; and our own knowledge of Chavez's ability to use intimidation -- note that the above article makes clear that "the fear of reprisals" could skew the results -- does not give us much hope that Rosales will be able to mount a successful challenge. But I have been paying attention to the Venezuelan election campaign somewhat and I'm going to suggest that the results released in the above article are believable.

There is external evidence from independent pollsters that Rosales is gaining ground fast on Chavez. It was only last month that the opposition parties united around Rosales, and the numbers from independent pollsters then placed his support at something like 17% to 19% and over thirty-five percent behind Chavez. Two very recent independent polls now suggest the situation is quite different. The recent release of a Hinterlaces Poll has it Chavez 48% Rosales 30%, and a Penn, Schoen and Berland Poll has it 50%-37% Chavez. When framed in the context of these two recent independent opinion polls, the above report from the Rosales campaign looks credible.

To digest these results, we must keep both population distribution and geography in mind. Most of the nine states listed are not very populous, as Venezuela's population is primarily located in the northern areas of the country, especially around Caracas. The U.S. Department of State's Venezuela Information Page says that 85% of Venezuela's 26+ million people are concentrated in urban areas in the northern portion of the country. Obviously, the Federal District of Caracas is the most densely populated as are its adjoining regions. But even then, the claims of the Rosales campaign bear closer examination, as the following map of Venezuelan states demonstrates.

So as you can see, there are reasons to be hopeful given that there is a large geographical area in which Rosales is gaining popularity and in the states of Carabobo, Miranda, Guarico, and Vargas he is beginning to penetrate the most populous areas of the country.

I want to be clear that I do not believe that Rosales will be able to win the election because I am convinced that Chavez has corrupted the electoral process to a degree significant enough to guarantee his victory. But at the same time I believe that it is possible for Rosales to make a strong enough showing that Chavez and his regime will not be able to execute their electoral crimes in the dark and THAT is where things will turn south for Chavez and his regime, both within Venezuela and especially abroad on the international stage. I do intend to keep an eye on this in the future.
1 posted on 09/26/2006 1:12:05 PM PDT by StJacques
[ Post Reply | Private Reply | View Replies]
To: Alia; livius; proud_yank; Kenny Bunk; Founding Father; Kitten Festival; chilepepper; Fiddlstix; ...
For everyone interested, I am putting together a "Latin American Left Watch" ping list, which will not only include Chavez and Venezuela, but other Latin American Left issues such as the FARC in Colombia, Morales in Bolivia, and more. If anyone would like to be on this list you can either ping me on this thread or Freepmail me and I will include you.

Well, the vote fraud efforts and the attempts to intimidate and even kill Rosales supporters by Hugo Chavez thugs will now have to kick into high gear!

Is there even a snowball's chance that Chavez won't steal the election?

4 posted on 09/26/2006 1:14:12 PM PDT by airborne (Show me your friends and I'll show you your future.)
[ Post Reply | Private Reply | To 2 | View Replies]
To: StJacques
Looking at Chavez's past actions, I see a fatal "accident" heading for Rosales. Chavez, like 99.999% of all dictators, hates competition and like the same majority of socialists/communists, he cannot see why anyone would oppose him. Therefore Chavez imprisons them or simply executes them for the "good of the State and people".

The capitalization of "State" and not "people" reflects the true feelings and policies highlighting what is more important to a socialist/communist or any other dictator (like islamofacists).
5 posted on 09/26/2006 1:17:32 PM PDT by M1Tanker (Proven Daily: Modern "progressive" liberalism is just National Socialism without the "twisted cross")
[ Post Reply | Private Reply | To 1 | View Replies]
To: StJacques

Thanks for your analysis, it sounds like a realistic one.

Don't worry, I'm sure Jimmy Carter will be on hand to make sure things go fair and smooth.

Hey, is Jimmy Carter watching this election to make sure that Chavez wins the race?

No - because Jimmy Carter will once again be there to assure that the cheating and voter fraud is all nice and "legal"...

BTW, any Venezuelan bloggers out there blogging about the election...in an honest fashion?

Yeah, you're probably right. Jimmah should move to Venezuela and stay there.

I'm sure jimmy carter will be down there to help him steal it, then 'certify' the election as the most honest election in history ......
Just as he did last time.

Then go on to say publicly and loudly that he wishes that USA elections were as honest and well run......
Just as he did last time.

There is no such thing as a non-rigged election in a Latin American country. Wont happen.

depends on the military

You guys are faster than me... Tapping things in from a PDA slows me way down.

But pointing out the idiocy of jimmy carter is worth repeating often. 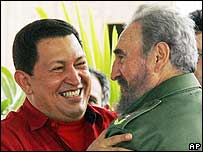 PING – Hugo is at it again!

I think Chavez is going to have to commit a Venezuelan holocaust before he'll be ousted.

We could move the UN there too!