President Bush is pursuing a globalist agenda to create a North American Union, effectively erasing our borders with both Mexico and Canada. This was the hidden agenda behind the Bush administration's true open borders policy.

President Bush intends to abrogate U.S. sovereignty to the North American Union, a new economic and political entity which the President is quietly forming, much as the European Union has formed.

The blueprint President Bush is following was laid out in a 2005 report entitled "Building a North American Community" published by the left-of-center Council on Foreign Relations (CFR). The CFR report connects the dots between the Bush administration's actual policy on illegal immigration and the drive to create the North American Union:

At their meeting in Waco, Texas, at the end of March 2005, U.S. President George W. Bush, Mexican President Vicente Fox, and Canadian Prime Minister Paul Martin committed their governments to a path of cooperation and joint action. We welcome this important development and offer this report to add urgency and specific recommendations to strengthen their efforts.

What is the plan? Simple, erase the borders. The plan is contained in a "Security and Prosperity Partnership of North America" little noticed when President Bush and President Fox created it in March 2005:

In March 2005, the leaders of Canada, Mexico, and the United States adopted a Security and Prosperity Partnership of North America (SPP), establishing ministerial-level working groups to address key security and economic issues facing North America and setting a short deadline for reporting progress back to their governments. President Bush described the significance of the SPP as putting forward a common commitment "to markets and democracy, freedom and trade, and mutual prosperity and security." The policy framework articulated by the three leaders is a significant commitment that will benefit from broad discussion and advice. The Task Force is pleased to provide specific advice on how the partnership can be pursued and realized.

To that end, the Task Force proposes the creation by 2010 of a North American community to enhance security, prosperity, and opportunity. We propose a community based on the principle affirmed in the March 2005 Joint Statement of the three leaders that "our security and prosperity are mutually dependent and complementary." Its boundaries will be defined by a common external tariff and an outer security perimeter within which the movement of people, products, and capital will be legal, orderly and safe. Its goal will be to guarantee a free, secure, just, and prosperous North America.

The perspective of the CFR report allows us to see President Bush's speech to the nation as nothing more than public relations posturing and window dressing. No wonder President Vincente Fox called President Bush in a panic after the speech. How could the President go back on his word to Mexico by actually securing our border? Not to worry, President Bush reassured President Fox. The National Guard on the border were only temporary, meant to last only as long until the public forgets about the issue, as has always been the case in the past.

Discovering connections like this between the CFR recommendations and Bush administration policy gives credence to the argument that President Bush favors amnesty and open borders, as he originally said. Moreover, President Bush most likely continues to consider groups such as the Minuteman Project to be "vigilantes," as he has also said in response to a reporter's question during the March 2005 meeting with President Fox.

Why doesn’t President Bush just tell the truth? His secret agenda is to dissolve the United States of America into the North American Union. The administration has no intent to secure the border, or to enforce rigorously existing immigration laws. Securing our border with Mexico is evidently one of the jobs President Bush just won't do. If a fence is going to be built on our border with Mexico, evidently the Minuteman Project is going to have to build the fence themselves. Will President Bush protect America's sovereignty, or is this too a job the Minuteman Project will have to do for him?

Mr. Corsi is the author of several books, including "Unfit for Command: Swift Boat Veterans Speak Out Against John Kerry" (along with John O'Neill), "Black Gold Stranglehold: The Myth of Scarcity and the Politics of Oil" (along with Craig R. Smith), and "Atomic Iran: How the Terrorist Regime Bought the Bomb and American Politicians." He is a frequent guest on the G. Gordon Liddy radio show. He will soon co-author a new book with Jim Gilchrist on the Minuteman Project.

Expanding NAFTA is hardly the same as having a North American Union. NAFTA is simply a trade treaty. We've had those since 1776.

For whatever reasons, selfish or selfless, was Perot right?

5 posted on 06/08/2006 4:52:44 AM PDT by Vaquero ("An armed society is a polite society" Robert A. Heinlein)
[ Post Reply | Private Reply | To 1 | View Replies]
To: conservativecorner
" ... To make North America prosperous for the future, we need to improve the efficiency of the movement of people, goods and services crossing our borders. We must remove barriers to trade, investment, research and education. We must protect our environment and promote the health and safety of our people."

Please FReepmail me to get on or off this ping list.

In earlier days this would have been called treason.

Today the Bushbots will call it brilliant diplomacy, the very same thing that NWO bot Clinton would have brought forward had he dared. 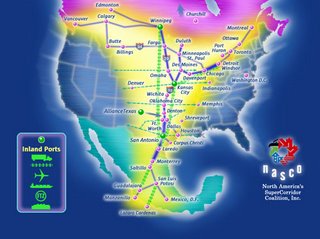 Check out this WND report by Jerome Corsi that describes the route for the 12-lane highway that is a part of the North American Union...The NAFTA Super Corridor will be constructed largely by private companies that intend to operate the new I-35 as a toll road. North America's SuperCorridor Coalition Inc., or NASCO...
9 posted on 06/08/2006 5:02:23 AM PDT by backhoe
[ Post Reply | Private Reply | To 1 | View Replies]
To: Spirited
In earlier days this would have been called treason.

Today the Bushbots will call it brilliant diplomacy, the very same thing that NWO bot Clinton would have brought forward had he dared.

EXCELLENT point! If this behavior had been during Clinton's term, the same people, largely the Bushbots, would have been raging the same as those of us opposed to Bush's immigration/bordercontrol/domestic security policies, agenda, and opinions.

Meanwhile, Zarqawi's dead, which is great news. But in other news, U.S. to be overrun by Mexico. So we get a ticket for a free meal at a nice restaurant, but when we get back, our home is gone.

Fortunetly, it looks like Corsi just makes this stuff up.

As I have said previously, Bush plans to destroy American WASP culture in the USA by diluting it with 150 million mexicans, and obliterating our borders and many of our laws.

Please line up on the left to get fitted for your tinfoil hats...

The Bushbots have said here on FR that this is a good idea......

14 posted on 06/08/2006 5:13:04 AM PDT by fishtank
[ Post Reply | Private Reply | To 12 | View Replies]
To: conservativecorner
What the Bush administration truly wants is the free, unimpeded movement of people across open borders with Mexico and Canada.

And this is news? I've been screaming about this for years.


Keep in mind Corsi is the guy who wrote an entire book supporting the "oil is not a fossil fuel" theory who presented the theory he was attacking as "oil comes from dead dinosaurs."

Fortunetly, it looks like Corsi just makes this stuff up.

I think it's time for you to discover Google and spellchecker. (try CFR)

18 posted on 06/08/2006 5:34:07 AM PDT by wolfcreek
[ Post Reply | Private Reply | To 11 | View Replies]
To: conservativecorner
"The blueprint President Bush is following was laid out in a 2005 report entitled "Building a North American Community" published by the left-of-center Council on Foreign Relations (CFR). The CFR report connects the dots between the Bush administration's actual policy on illegal immigration and the drive to create the North American Union:"

Acknowledging the existence and role of the CFR (an agency founded by the heads of the federal reserve) could get this thread pulled.

Corsi has well established himself as either a profound idiot, or a liar (difficult to tell one from the other in many cases).