More than two and a half years ago, the nation laughed as pro-family crusader Rick Santorum predicted the consequences of legalized gay marriage: If man-on-man marriage was sanctified, man-on-child and man-on-dog unions might not be far behind.

Sponsored by Senators Cynthia Creem and Robert O’Leary, and Representatives Michael Festa and David Linsky, the bestiality measure was buried in a packaged assault on morality, disguised as “An Act Relative to Archaic Crimes.” The bill would strike down several sections of the current penal code criminalizing adultery, fornication and the advertisement of abortion. It also repeals what appears to be a sodomy statute forbidding “abominable and detestable crime against nature, either with mankind or with a beast.”

The new law would continue to forbid “a sexual act on an animal,” but reduce possible penalties for committing such a crime, making it decidedly less illegal. Whereas the old law punished doggie-diddling and the like with hard time (a maximum sentence of 20 years) in state prison, the new measure would give activist judges the option of slapping perps with a mere two and a half years in plush local jails, or even letting zoophiliacs walk with a $5,000 fine.

How badly has Massachusetts’ moral compass suffered since dudes started honeymooning with dudes? Not one legislator, nor a single member of the God-fearing public, appeared before the judiciary committee to denounce the proposed changes. But then again, who has time to worry about bestiality when teenagers are shoplifting and buying NyQuil?

Though presumably more than willing to lower penalties for crimes against nature, Rep. Linsky demanded the judiciary committee get tough on the real criminals—mall thieves. It turns out that if shopping bags are lined with duct tape, any merchandise inside can be snuck past security tag sensors undetected. One shoplifting ring, Linsky testified, had recently been busted in Natick with $47,000 in stolen goods. Linsky’s bill would criminalize the possession of duct-tape bags and other shoplifting tools in malls, punishing offenders with up to two years in the clink and a $1,000 fine.

Cold medicine, it appears, is also a greater threat to society than bestiality, as Falmouth Rep. Matthew Patrick denounced NyQuil and codeine, but remained silent about barnyard romance. Patrick’s bill would criminalize the sale of “cough syrup or a cold remedy containing alcohol or codeine … to any person under the age of 18.” Such medicine “wreaks a lot of havoc on young people,” Patrick argued.

And the shoplifting and NyQuil bills were two of the tamer legislative initiatives before the committee; the rest of the docket amounted to a clearinghouse of insanity.

Up for consideration was a measure, sponsored by Southie’s Jack Hart, to ban the advertisement of fireworks; a bill banning the sale of laser pointers to minors; a push to revamp the way the state punishes graveyard vandals; an examination of how to combat the epidemic of drunken riots; new punishments for drivers who steal gas; and—our personal favorite—a bid to make criminally liable anyone who knowingly allows their telephone to be used “repeatedly, for the sole purpose of harassing, annoying or molesting [another] person … or for the purpose of repeatedly using indecent or obscene language to that person or his family.”

Hopefully, with those problems solved, we’ll all be able to marry our dogs and live in peace.

PETA has been disturbingly silent on these matters.

Where are the posters who laughed and said this wouldn't happen?

Don't count on it. They'll just ask for more deviancy to be permitted.

I am SO glad I moved from that hell-hole.

DIdn't they say once that this is OK so long as the animals give their consent?

After all, animals are people too.....

Counting down to thread pulling....

Twenty years for doggy diddling? Yes, that's too much. 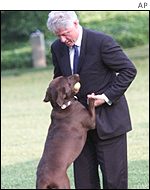 "Whereas the old law punished doggie-diddling and the like with hard time (a maximum sentence of 20 years) in state prison, the new measure would give activist judges the option of slapping perps with a mere two and a half years in plush local jails, or even letting zoophiliacs walk with a $5,000 fine."

Seriously... Does anyone really think screwing a dog deserves a 20 yr sentence? As bizzare as it may be, does it even deserve a 2-1/2 yr sentence or a $5000 fine?

--as sort of an aside to this, liberal icon Thomas Jefferson wrote the Virginia Constitution--which included the death penalty for sodomy--in those days clearly understood as male-male sex--

I just want to know who makes up the bestiality lobby that won political backing for this.

19 posted on 11/14/2005 9:57:03 AM PST by BulletBobCo
[ Post Reply | Private Reply | To 1 | View Replies]
To: american colleen; Lady In Blue; Salvation; narses; SMEDLEYBUTLER; redhead; Notwithstanding; ...
More than two and a half years ago, the nation laughed as pro-family crusader Rick Santorum predicted the consequences of legalized gay marriage: If man-on-man marriage was sanctified, man-on-child and man-on-dog unions might not be far behind.

Wonder which "church" will be the first one to offer a Blessing Ceremony?