GAZA CITY, Gaza Strip - A shadowy Hamas bombmaker who tops Israel's most-wanted list on Saturday issued his first videotaped statement since going into hiding more than a decade ago.

Mohammed Deif praised Israel's withdrawal from the Gaza Strip as a victory for armed resistance, rejected calls for his group to disarm, and vowed to continue attacks on Israel until the Jewish state is erased from the map.

Deif, who has escaped three Israeli attempts to kill him, has been living underground since 1992. He is so shadowy that the most recent photograph of him is from the 1980s.

If they are now a wing of the government does that mean its open season???

2 posted on 08/26/2005 4:40:44 PM PDT by samadams2000 (Pitchforks and Lanterns..with a smiley face!)
[ Post Reply | Private Reply | To 1 | View Replies]
To: NormsRevenge
Mohammed Deif praised Israel's withdrawal from the Gaza Strip as a victory for armed resistance, rejected calls for his group to disarm, and vowed to continue attacks on Israel until the Jewish state is erased from the map.

Well, there it is. If they attack and you withdraw, what is the lesson they learn?

Well that didn't last long. What, one day of peace?

Now Israel has to demand that Palestinian authorities stop this man.... (again)

Isreal will do what it has to do to survive. Hamas is setting itself up for a major A$$ Kicking by Isreal. If Hamas can't remember 1967 they are in deep trouble.

He is so shadowy that the most recent photograph of him is from the 1980s. 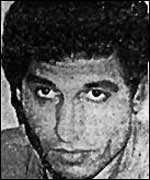 Wanted: Mohammed Deif, who lives 'underground' in a Palestinian refugee bunghole and hasn't been seen since the 1980's. Answers to the name 'Lucky'.

In the photo below, what a missed opportunity to send more death cultists to jihadist 'paradise'.

He'll soon get a rocket up the wazoo!

JNEWSWIRE.com: "HAMAS: CHRISTIAN ZIONISM IS OUR ENEMY" by Jerusalem Newswire Editiorial Staff (ARTICLE SNIPPET: "The Hamas terrorist organization has singled out Christian supporters of Israel, putting them on notice that it views their actions as "criminal," making them enemies of the Palestinian Arabs.") (August 22, 2005)

MEMRI.org - Special Dispatch Series - No. 964: "AN INTERVIEW WITH HAMAS LEADER DR. MAHMOUD AL-ZAHAR" (ARTICLE SNIPPET: "The following are excerpts from an interview with Hamas leader Mahmoud Al-Zahar that appeared in Asharq Al-Awsat on August 18, 2005.") (August 19, 2005)

MEMRITV.org - Transcript - Clip No. 731: "HAMAS REPRESENTATIVE IN LEBANON OSAMA HAMDAN: THERE IS A BEGINNING OF EUROPEAN UNDERSTANDING TOWARDS ARMED RESISTANCE" (TRANSCRIPT SNIPPET: "The following are excerpts from an interview with Hamas representative in Lebanon Osama Hamdan, which aired on Al-Arabiya TV on June 24, 2005") (June 27, 2005)

ARUTZ SHEVA.com: "HAMAS BOMB-MAKER STAR OF SYRIAN PRODUCED TV SERIES A 12-part series on the life of the “father of suicide bombings,” Hamas bomb-maker Yihye Ayyash is set to be aired on the Lebanese-based Hizbullah satellite television station al-Manar." (April 18, 2005)

JIHAD WATCH.org (YNET): "PALESTINIAN GIRL HIDES GUN IN UNDIES" (ARTICLE SNIPPET: "The soldiers in the Balata refugee camp, a terrorist hotbed, found the gunman inside his house and ordered him to surrender his weapon. He refused, saying he didn't have it. After questioning, they found the man's sister had hidden it her underwear. Troops then arrested the Hamas terrorist. They also found a gun holster and bullets inside the building.") (April 16, 2005) (Read More...)

INTELLIGENCE.org.il - Special Information Bulletin - INTELLIGENCE AND TERRORISM INFORMATION CENTER AT THE CENTER FOR SPECIAL STUDIES (C.S.S.): "SYRIAN REGIME - PALESTINIAN TERRORIST ORGANIZATIONS" (ARTICLE SNIPPET: ""The Tunnels of Hell," a movie produced by Hamas' information department and which appeared in a Hamas forum on the Internet on March 24, 2005. The movie praises and glorifies the explosive-packed tunnels.") (April 4, 2005)

WorldNetDaily.com: "DOCUMENTS SHOW ARAFAT PAID FOR DISCO BOMBING Sent Thank-You Note to Family of Terrorist Who Killed 21, Injured 120" by Aaron Klein (ARTICLE SNIPPET: "The attack on the Dolphinarium was one of the most brutal massacres of the Palestinian intifadah, killing 21 people, mostly teens, on a Friday night in June 2001. More than 120 people were injured in the powerful blast carried out by Hamas terrorist Hassan Khutari.") (September 15, 2004)

IACSP.com: "ABDULLAH ASSAM: THE MAN BEFORE BIN LADEN" by Steve Emerson (ARTICLE SNIPPET: "Those who met Azzam were dazzled by his spellbinding oratorical skills, his capabilities as a military strategist, his religious leadership, and his interminable energy. Azzam helped bring about the mobilization of the Muslim Brotherhood movement more than any other leader. Today, the military wing of Hamas in the West Bank is called the Abdellah Azzam Brigades.")