Terrorism usually comes like a bolt from the blue, but not so the four explosions yesterday in London, killing at least 37. Some British Islamist leaders have been warning for months that such violence was imminent.

An Islamist British group called Al-Muhajiroun (Arabic: “the immigrants”) for some time publicly stated that the United Kingdom was immune from Islamist violence because of its acceptable behavior. In an April 2004 conversation, the 24-year-old head of Al-Muhajiroun’s Luton branch, Sayful Islam, announced that he supports Osama Bin Laden “100 percent” in the quest to achieve “the worldwide domination of Islam.”

Toward this end, Sayful Islam endorsed terrorism in Great Britain. “When a bomb attack happens here, I won’t be against it, even if it kills my own children. … But it is against Islam for me to engage personally in acts of terrorism in the UK because I live here. According to Islam, I have a covenant of security with the UK, as long as they allow us Muslims to live here in peace.” He further explained. “If we want to engage in terrorism, we would have to leave the country. It is against Islam to do otherwise.”

Covenant of security? What is that? In an August 2004 story in the New Statesman, “Why terrorists love Britain,” Jamie Campbell cited Mohamed Sifaoui, author of Inside Al Qaeda, that it has long been recognised by the British Islamists, by the British government and by UK intelligence agencies, that as long as Britain guarantees a degree of freedom to the likes of Hassan Butt [an overtly pro-terrorist Islamist], the terrorist strikes will continue to be planned within the borders of the UK but will not occur here.

Campbell draws from this the perversely ironic conclusion that “the presence of vocal and active Islamist terrorist sympathisers in the UK actually makes British people safer, while the full brunt of British-based terrorist plotting is suffered by people in other countries.”

Omar Bakri Mohammed, a Syrian immigrant to the UK who headed Al-Muhajiroun, then confirmed the covenant of security, telling about companions of the Prophet Muhammad given protection by the king of Ethiopia. That experience, he told Campbell, led to the Koranic notion of covenant of security: Muslims may not attack the inhabitants of a country where they live in safety. This “makes it unlikely that British-based Muslims will carry out operations in the UK itself.”

But in January 2005, Omar Bakri Mohammed determined that the covenant of security had ended for British Muslims because of post-9/11 anti-terrorist legislation that meant “the whole of Britain has become Dar ul-Harb [the Abode of War, the territory open for Muslim conquest].” Therefore, “the kuffar [unbelievers] has no sanctity for their own life or property.”

The country had gone from safe haven to enemy camp. To renew the covenant of security would require British authorities to undo that legislation and release those detained without trial. If they fail to do so, British Muslims must “join the global Islamic camp against the global crusade camp.”

Omar Bakri Mohammed went on overtly to threaten the British people: “The response from the Muslims will be horrendous if the British government continues in the way it treats Muslims,” explicitly raising the possibility of suicide bombings under the leadership of Al-Qaeda. Western governments must know that if they do not change course, Muslims will “give them a 9/11 day after day after day!”

When Sean O’Neil and Yaakov Lappin of the London Times asked Omar Bakri Mohammed about his statements on the covenant, Bakri said his definition of Britain as Dar ul-Harb was “theoretical” and he provided a non-bellicose re-interpretation:

It means that Muslims can no longer be considered to have sanctity and security here, therefore they should consider leaving this country and going back to their homelands. Otherwise they are under siege and obviously we do not want to see that we are living under siege.

In a less-guarded moment, however, Omar Bakri Mohammed acknowledged that for him, “the life of an unbeliever has no value.”

Yesterday’s explosions mark the end of the “covenant of security.” Let’s hope they also mark the end of an era of innocence, and that British authorities now begin to preempt terrorism rather than wait to become its victims.

Add this to the NWW file:

2 posted on 07/08/2005 3:38:59 AM PDT by Lazamataz (Looks like the Supreme Court wants to play Cowboys and Homeowners.)
[ Post Reply | Private Reply | To 1 | View Replies]
To: familyop
“When a bomb attack happens here, I won’t be against it, even if it kills my own children. … But it is against Islam for me to engage personally in acts of terrorism in the UK because I live here.

God (Jehovah, not Allah), what a hypocrite. So I can stand here and passively encourage terrorism by saying out loud that I accept it, but because I live well, I won't actually participate. This guy needs to be on the next flight back to the sandy hell that he came from.

WORLD, look at what this man is saying! But in January 2005, Omar Bakri Mohammed determined that the covenant of security had ended for British Muslims because of post-9/11 anti-terrorist legislation that meant “the whole of Britain has become Dar ul-Harb [the Abode of War, the territory open for Muslim conquest].” Therefore, “the kuffar [unbelievers] has no sanctity for their own life or property.”

Anti-terrorist legislation, not anti-muslim. If he is finding himself falling under the legislation or his followers then he should realize he is outside the law of the land. And the people of Britain should realize that this is a spokesman for the Nation of Islam within their own borders. The enemy has inflitrated their lands and yesterdays bombings are but a calling card. Europe must choose to go to war with the Nation of Islam or submit to it.

You can't separate all that crap from the rest of the Muslims, attached to particular crimes beyond a reasonable doubt in a court of law where you have to wait for each one to blow something up. You put 2 million british Muslims on boats and get rid of them all and burn the mosques to the ground.

I was listening to michael savage yesterday. He played some clips taken from a muslim gathering in London on May 24th. Nuke,Nuke, washington, Death to George Bush, Death to Tony Blair, ect...is what was chanted. Interesting enough the clip came from Foxnews, which for some reason they didnt air yesterday.

7 posted on 07/08/2005 4:11:50 AM PDT by Kewlhand`tek (What the hell was that? I hope it was outgoing!)
[ Post Reply | Private Reply | To 6 | View Replies]
To: familyop
Bakri said his definition of Britain as Dar ul-Harb was “theoretical” and he provided a non-bellicose re-interpretation:

That's what moderate muslims say to the filthy kuffar. And theoretically, they are going to kill all non-believers until Islam dominates the world...theoretically, that is.

These assholes should be declared "In Season"...No bag limit, shooting over baited fields okay, and a bounty on all turned into the authorities...

Ten bucks per turban? or should it be 10 bucks for a full beard?
Mosks should be closed down and they should be deported. Those are hate preaching centres, nothing more.

Heaven forbid if they should set off a bomb in the "big dig".
I wouldn't be so quick to blame Muslims though, it would probably be Ted that did it, hoping to blame it on them, and cover up that failure at the same time.

10 posted on 07/08/2005 4:56:59 AM PDT by Nathan Zachary
[ Post Reply | Private Reply | To 9 | View Replies]
To: familyop
"But in January 2005, Omar Bakri Mohammed determined that the covenant of security had ended for British Muslims because of post-9/11 anti-terrorist legislation that meant “the whole of Britain has become Dar ul-Harb [the Abode of War, the territory open for Muslim conquest].” Therefore, “the kuffar [unbelievers] has no sanctity for their own life or property.”

This is why Islam is dangerous. Muhammed was an opportunist who presented "religious" law to his followers and then altered it at whim to suit his agenda. That he did this tells Muslims that they can do the same. They can tell you anything they think you want to hear today, then change it or deny it the following day if doing so enhances their agenda.

Or put another way. Islam is a religion created by a psychopath to make psychopaths feel good about themselves. As such, it has become the religion of choice for modern psychopaths who can use it to justify their depravity.

Are all Muslims terrorists? No.

But, you don't refuse to drain a swamp because all of the mosquitoes are not actually infected with malaria, either.

13 posted on 07/08/2005 5:44:47 AM PDT by dinasour (Pajamahadeen)
[ Post Reply | Private Reply | To 11 | View Replies]
To: familyop
We hear it time after time, "the life of a non believer has no value" or "we will rule the west" or "we will rule Britain and America." I don't believe there are innocent Muslims. There are Muslims that commit terrorist acts, there are those that give them physical and financial support to carry out these attacks, there are those that know who is doing these terrorists acts but protect them and then there are those who secretly take pride in these attacks.

Our elected leaders live in their ivory towers immune from these attacks and immune to the outcry of their citizens against these attacks, and they can only wring their hands and talk to TROP and warn against hate crimes against people that want us dead.

I don't want to see people hurt or killed, but IMO if there are two or three attacks on the scale of 9/11 there will be a day of reckoning throughout this country and there will be nothing the government can do to stop it.if we are every hit
14 posted on 07/08/2005 5:51:14 AM PDT by Americanexpat (A strong democracy through citizen oversight.)
[ Post Reply | Private Reply | To 1 | View Replies]
To: river rat

I agree.........perhaps we should revert to the old system where these imans, mulas and other holy clowns who declare war on the civilized world would be simply declared "outlaws".....meaning they no longer had the protection of our laws......
.then any citizen would be free to deal with them in any manner they felt appropriate, (357 Mag comes to mind) without any penalties under the legal system of civilized men.
Works for me! 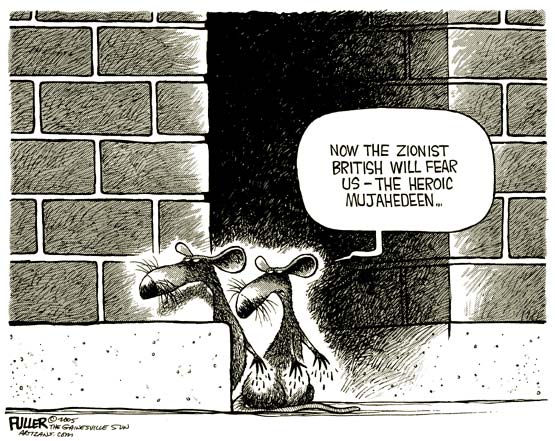