A Parasite Devastates Bees, and Farmers Are Worried
NY Times ^ | May 2, 2005 | IVER PETERSON

FAIRFIELD, N.J., April 28 - "Do you want to see a ghost town?" Joe Linelho asked. He pulled the lid off one of his beehives and worked one of the honey frames loose with a small blade. Not a bee responded to the intrusion. The hundreds of little hexagonal cells, where young bees should be incubating, were empty, and at the center hung a cluster of bees, all dead.

Mr. Linelho, a bee hobbyist, began the winter with 40 hives, each with a queen and 50,000 to 70,000 honeybees. In the spring, when fruit growers rent hives to pollinate their crops, he had just 20 thriving hives left, with the rest as dead as the one he had just opened, or nearly so, with only a few bees surviving.

Beekeepers across the country have found losses in similar or worse proportions, according to the United States Department of Agriculture, with the West Coast hit the hardest. And while it is normal for a small number of domestic bees to die over the winter, an Asian parasite, the Varroa mite, is blamed for much of the bee death.

"This is a national problem," said Kevin Hackett, national program leader for bees and pollination at the Agriculture Department's Research Service. "We've lost at least half of our hives, and 70 percent in some areas. With a couple of million hives in the U.S., and you reduce that population by half, that's very serious."

The problem is not just about honey. Bees are needed to pollinate $15 billion worth of agricultural products a year. Growers report increasing competition, and rising prices, for the hives that are moved around the country in the spring, from the almonds in California in February to the apples, blueberries and other fruits elsewhere later in the season.

"All the fun stuff - the fruits and nuts and berries - are pollinated by bees," Mr. Hackett said.

Paul A. Raybold, the New Jersey state apiarist, has so far inspected 756 hives in the state and found 440 of them dead. "You always expect a winter die-off of maybe 5 or 10 percent, but nothing like this," he said. A warming spell followed by a cold snap last winter caught many bees away from their honey supply, Mr. Raybold said.

But most of the losses are being attributed to the Varroa mite, which came into the country in the early 1980's, Mr. Raybold said, and began by devastating the country's wild honeybee population.

Beekeepers used miticides to protect their bees. But now the mite - which is unusual among parasites because it kills its host, Mr. Raybold said - is developing resistance to the chemicals, and researchers are looking for new defenses.

For commercial beekeepers and the farmers who need their bees to pollinate their crops each spring, the loss of so large a part of the bee population has aroused concerns about shortages and high prices.

"I'm not in the pollination business, but this year I wish I was," said Bob Hughes, president of the New Jersey Beekeepers Association, who said he had lost more than half of his nearly 200 hives in Yardville, N.J. "I've had three phone calls in three days from people who want to rent colonies for pollinating. I sent two of them to hobbyists I knew. But the other one I couldn't help." So far this spring, he said, 11,000 hives have been brought to New Jersey to pollinate crops.

Fruit growers usually pay $30 to $40 to have a hive placed among their plants in the spring, with the hive's owner keeping the honey. But Chris Heintz, director of research for the Almond Board of California, said she had heard reports of growers paying more than $100 per hive. With one hive needed per acre of almond trees, that can add up fast.

Such an increase in the price of bees worries Paul Geletta, one of the owners of Atlantic Blueberry Farms, a big producer in Hammonton, N.J. Knowing that there might be a shortage, he arranged back in January to rent hives for this spring, lining up beekeepers in Louisiana, Florida and Virginia. But if people in California are paying $100 for a hive that fetches about $40 in New Jersey, he said, will he be able to get bees next spring?

"Some of the beekeepers down South are going to be tempted to go out to California for the almonds if this keeps up," Mr. Geletta said.

Mr. Linelho has bought a "hygienic queen" from Russia, one that is genetically predisposed to keep itself and other bees clean of dirt and parasites. He hopes this tendency will spread to his bees. He and Mr. Hughes will also employ beekeeping tricks to combine surviving bees from decimated colonies. The hope is that these combined colonies can produce a queen - and that researchers can find a way to stop the mites.

One possible solution involves putting screens in the bottom of the honeycomb frames that would make it harder for mites that have fallen down to climb back. Another involves deploying a chemical bees secrete in making wax that is harmless to the bees but potentially fatal to the mites. In addition, researchers are working on a fungus, also harmless to bees but bad for mites, that would be applied to vinyl strips and hung inside the hive.

"This is a crisis, right now," said Mr. Hackett, the Agriculture Department researcher, "and we're throwing everything we have at it." 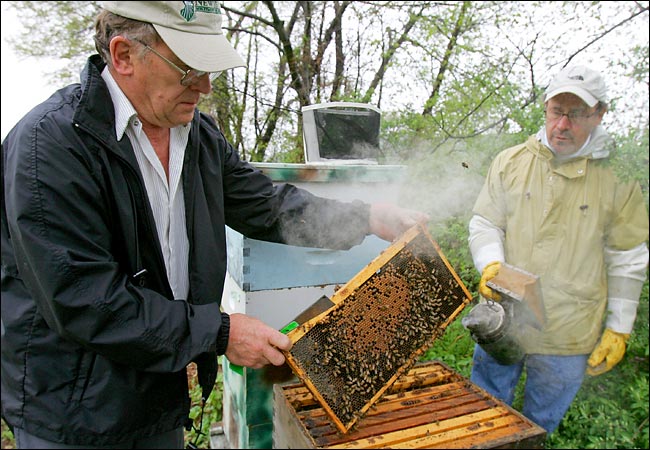 Well, it was a good go at it, but looks like we're all doomed.

2 posted on 05/02/2005 1:17:10 PM PDT by Waterleak (I pity the fool)
[ Post Reply | Private Reply | To 1 | View Replies]
To: neverdem
And while it is normal for a small number of domestic bees to die over the winter, an Asian parasite, the Varroa mite, is blamed for much of the bee death.
There were reports of that happening here in PA about 5 years ago.  I remember talking to a bee keeper who estimated his losses at 80%.  Once you hit a certain point, the loss in farm production becomes precipitous.
Owl_Eagle

This has been going on for a few years. There's always a new mite of some kind or another killing the bees. I have a good friend that's a beekeeper hobbyist up in WA, and he gave up a while back because it was hard for him to keep the few hives he had alive due to the mites.

When I was growing up in the 80's I remember we used to have lots of wild honeybees visiting flowers in our yard. By the 90's the number had dropped precipitously.

I can count the honeybees I have seen over several years(5-6) in our yard on one hand.

Oh great! And I've got
a chipped tooth, and the last girl
I asked out told me

she's "...just too busy
at work work to go out right now."
Now bees are dying

Does anyone know
if there's a Vogan spaceship
in thumbing distance?

This is a serious business, because as the article says, a lot of plants rely on bees for pollination.

We should put the illegals to work pollenating plants. Give them a big long stick with a supply of little sticky cotton balls.

14 posted on 05/02/2005 2:01:09 PM PDT by Bloody Sam Roberts (This tagline will be destoyed to make way for a new Hyperspace bypass.)
[ Post Reply | Private Reply | To 12 | View Replies]
To: Cicero
This was reported in Scientii=fic American awhile back. Honey farmers are having to load up their hives and truck them around the country so that Apples in Washington State, fruits and vegatables in the Imperial Valley of California and ALL crops that require pollination are pollinated.

As Rush would say, "This is series!"

If there is a further significant decline in the pollinating honeybee population, the prices on many fruits and vegetables could rise a lot. Some things we expect to find in the produce department could flat-out disappear.

It could really bring home the realization that human commerce doesn't exist independently of nature.

Agriculture Pollination by honey bees is as vital to the production of many crops as water and sunlight. There is no substitute! One third of our daily diet relies on honey bee pollination. Almonds, apples, sweet cherries, plums and prunes are examples of crops that require crosspollination between varieties in order to produce a crop. Bee pollination is necessary for the production of cucumbers, squash, pumpkins, and melons. Twenty-one additional California fruit and nut crops are known to produce larger yields when pollinated by honey bees. These fruit, nut, and vegetable crops were worth $4.4 billion in 2002 - a value approximately 35 times greater than the income generated directly by the beekeeping industry.

The greatest value of honey bee pollination is associated with the production of seeds that will have worldwide distribution. Twenty vegetables, including asparagus, carrots, celery, onions, radishes, and turnips produce seeds only when their flowers have been adequately pollinated. Likewise, seed production of forage crops such as alfalfa, various clovers, trefoil, and vetch, requires many visits by foraging bees. Including the "indirect" value of honey bee pollination (meat, dairy products, vegetables, hay, etc.), honey bees are responsible for nearly half of California's agricultural production (cash receipts for farm marketing), which is currently valued above $30.0 billion. Thus, honey bee pollination is really worth in excess of 400 times the intrinsic earning power of the bees to beekeepers.

Can y'all ship some of them mites down here to Texas to help with the Killer bees?

It's Bush's fault because he reneged on Kyoto so Halliburton could make profits.