As the 2004 U.S. presidential election nears, there is no doubt the result will be crucial for America and the rest of the world.

George Bush deserves his second term. John Kerry deserves to be beaten -- and the more resoundingly he is beaten, the better it will be for American democracy.

Kerry is the poster-face of those Americans who drew the lesson from Vietnam that misuse of U.S. power is endemic because it serves an inherently exploitative capitalist economy.

Vietnam made these Americans -- predominantly liberal and influenced by the radical left -- turn their backs on the foreign policy shaped by Democratic presidents from Franklin Roosevelt and Harry Truman to John Kennedy and Lyndon Johnson.

This was the policy of marshalling America's resources to contain and defeat enemies of freedom.

In Vietnam, this policy ran into trouble. As difficulties mounted there, an increasing number of Americans and leadership of the Democratic party came to view this policy as not only politically misguided, but also morally reprehensible.

Democrats became isolationists and defenders of accommodating the expanding Soviet communist empire by making a virtue of detente, conceived initially as an aspect of containment.

For the more chic lib-left intellectuals, American defeat (as in Vietnam) became a required cure for reforming American society.

In pushing the limits of critical dissent, post-Vietnam Democrats flirted with treason by consorting with freedom's enemy.

While historians debated whether America withdrew or was defeated, Democrats took the Vietnam experience to mean America must not get involved abroad -- whatever the cause.

The defeatist slogan of "bringing America home" formed the theme of George McGovern's Democratic bid for the presidency in 1972 against Richard Nixon. McGovern lost, but defeatism persisted in the administrations of Jimmy Carter and Bill Clinton.

American isolationism and defeatism are two faces of the same coin.

In the aftermath of WW I, American isolationism was promoted by Republicans and the consequences were devastating. They learned, and then stood firm in containing Soviet communism.

Defeatism is purposefully stoking doubts about America's capacity and resolve to defeat the enemy when engaged in war. This is what Kerry has been doing -- demagogically magnifying difficulties in Iraq to undermine U.S. resolve to help secure Iraq's future and crush its enemies, who are also enemies of freedom, decency and civilization in the post-Cold War world.

The 2004 election is taking place in the midst of a global war against Islamist terrorism.

Sixty years ago, another presidential election took place with America at war. In 1944, the Republican candidate was Thomas Dewey, governor of New York, going against President Franklin Roosevelt seeking an historic fourth term.

It would have been a monstrosity for Dewey to imagine campaigning for the presidency by blaming Roosevelt for Allied losses.

But this is the shame of Kerry's campaign in 2004 -- his defeatism feeds the delusions of Muslim fascists.

Kerry scorns the courage of Iraqis and their interim leader Ayad Allawi as they fight the dregs of the Arab-Muslim world in their country. Displaying pettiness, he characterizes support for freedom's struggle as depriving Americans of resources domestically.

His thinking and political career remain inseparably connected with Vietnam.

Defeatism in Vietnam resulted in appalling tragedy for millions in the region. Defeatism now will mean Vietnam revisited on Iraq and the Middle East.

Hence Kerry's defeat has become, ironically, essential for America to decisively turn the page on its Vietnam experience, which has stained the nation's politics over the past three decades.

I guess John Kerry will have to go on beating himself.

Ah the double post police are on the job.

4 posted on 09/29/2004 11:26:42 AM PDT by AxelPaulsenJr (Excellence In Posting Since 1999)
[ Post Reply | Private Reply | To 3 | View Replies]
To: kingattax
George Bush deserves his second term. John Kerry deserves to be beaten -- and the more resoundingly he is beaten, the better it will be for American democracy.

A great quote, and needing to be repeated over and over again.

When I saw the authors name and where the post originated, I almost did not even bother reading it.

this is a great article. I was amazed that it was published

in a Canadian newspaper. The editors must be off moose-

watching and it slid by.

8 posted on 09/29/2004 11:43:56 AM PDT by i_dont_chat
[ Post Reply | Private Reply | To 1 | View Replies]
To: kingattax
Well Yaaaawn, your pessimistic hate campaign comes down to 90 minutes. You either win the debate or you and your Party/beliefs are relegated to the trash heap of historic losers. This is it and there are no do overs just like your silly Convention. You have to sell yourself as a regular guy who is not a pompous, egotistical, self absorbed elitist. Apparently, your face got wind burned from taking that final nuance on the war. Now you have nothing to offer as far as record or economy so all you have left is to fool enough voters with your empty cliches.

The Yaaaawn Tax & Kerry campaign has decided to throw dice on Iraq and hope for more dead soldiers. Witness the desperation that is left of this sinking Garbage Scow. If Yaaawn asks the people if they are better off than 4 years ago, he is terrified of the answer. If the people vote their pocketbook he is toast. Most voters know their after tax income is as good as it has been.

In his obsession to bash the President, the challenger decided he had to insult the very leader that an independent Iraq chose to run their country in the interim. Alawi was not the leader we would have preferred but was the Prime Minister they chose freely. How unstatesmanlike can you be?? This the guy who says he is the superior diplomat? In what way, by insulting and degrading all our allies sacrifices??

He has pretty much torpedoed the worst economy since the Great Depression line. It is really hard to sell that line when it is the fastest growing economy in the world. All of his midget buddies in Europe would die to have our 3.5-4% growth rate or 5.4% unemployment. Now this is not the 30-35% growth that Iraq is expected to have this year but it is still the envy of the world. This in spite of GW inheriting a recession when he took office!

The economy has never been so robust as it has over the past 12 months thanks to the steady leadership of George W Bush. Being in the housing industry over the past 15 years the average housing starts has been around 1.4 million starts nationwide. During the BJ and the Witch’s years they went to an unheard 1.6 million. They have been pegged at 2 million over the past 12 months which is the Dodge Hemi of the economy. The combination of low interest rates, tax-cuts and more jobs than any other time in history has made home ownership grow at unheard of rates. This is why they have been forced to crying about every car bomb or kidnaping in Iraq.

Now Yaaawn comes down to the biggest 90 minutes in his disgraceful history. After President Bush places his Tony Lamas where the tanning booth doesn’t shine, Cambridge will be the only Battleground left. He knows that the Rat Party is not kind to it’s losers, ask Albore if you can get into his rubber room and unmask his muzzle. He has to convince women that apologizing to terrorists and serving them subpoenas is going to make them safer?? He has to convince America that leaving Iraq is a better idea than finishing the job. Finally, he has to convince America that they want him & Dingbat in their homes over the next 4-8 years. That would bankrupt Sominex!

Otherwise, he and his Party are all losers (is this line filled with redundancy?). This would make 6 elections in a row that they have gotten blown-out since Newt Gingrich’s Contract With America. They had the White House for 2 elections but only received 42 and 48% of the vote while losing Congress? If he doesn’t win on Thursday he and his party will be 0-6 and as relevant as Gorbachev and Carter. So Yaaaawn the Demosaur has to pull the wagon full of screaming kids through the tar pits knowing the sabers are out of their scabbards. There’s still a spot left for one more failed Party on the ash heap.

Pray for W and Our Troops

...with time off for good behavior? 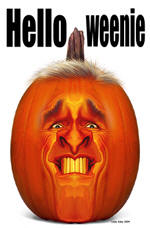