IN A WEEK dedicated to Republican speechifying about why John Kerry should not be the next president of the United States, the most persuasive words came from a Democrat. And I don't mean Zell Miller's invigorating speech on Wednesday.

I mean John Kerry's rant in Ohio, less than an hour after George W. Bush finished his acceptance speech in New York. It's a shame the networks didn't include Kerry's remarks in their GOP convention coverage. In just 30 minutes, Kerry provided a revealing look at himself, a reminder of his meandering views, several clues about the state of his campaign, and a hint of what the next two months will look like.

Kerry sought to portray himself as an aggrieved but righteous politician, the innocent target of vicious Republican attacks. This is a substantial rewriting of history. Kerry and his campaign staff have been every bit as biting in their criticism--having, prior to this, called Vice President Cheney unfit for office and accused President Bush of using family connections to avoid serving in Vietnam. But the gamble for Kerry is not that reporters will point out the many harsh attacks his campaign has leveled at the Bush administration. The media wouldn't be so inconsiderate. The risk for Kerry is that in a campaign devoted largely to convincing voters of his strength, assuming the mantle of victim does little to inspire confidence.

"For the past week, they attacked my patriotism and my fitness to serve as commander in chief," Kerry complained.

He later added: "Worst of all, George Bush misled America when he took us to war in Iraq."

That last line may have been the most significant one in the speech because it indicates that Kerry has veered sharply back to the Howard Dean/Al Gore/Michael Moore wing of the Democratic party. Kerry had largely abandoned the "Bush-lied" line of attack since admitting on August 9 that, in retrospect, he still would have voted to authorize the war in Iraq. That change of strategy prompted a pitched intra-party debate. Many congressional Democrats and party strategists pushed the Kerry campaign to trash Bush as dishonest. (It's worth remembering that 95 percent of the delegates to the Democratic National Convention opposed the war.) The Kerry campaign resisted. Their reluctance may have been born of Kerry's renewed endorsement of the war, his own history of supporting regime change, or perhaps even John Edwards's explicit rejection, last year, of the notion that Bush lied to get us into war.

"So did I get misled? No. I didn't get misled," Edwards said on Hardball with Chris Matthews on October 13, 2003. When Matthews asked Edwards directly if he got an "honest reading on the intelligence," the junior senator from North Carolina seemed to place much of the blame on the intelligence community. "I serve on the Senate Intelligence Committee," he said. "So it wasn't just the Bush administration. I sat in meeting after meeting after meeting where we were told about the presence of weapons of mass destruction. There is clearly a disconnect between what we were told and what, in fact, we found there." Edwards's rhetoric was in some respects more alarmist than that of the Bush administration, describing the threat from Iraq as "imminent" and calling for the overthrow of Saddam long before Congress voted to authorize war.

The report from the Senate Intelligence Committee didn't help Kerry either. Whatever one thinks of the report in its entirety, its specific findings helped Bush politically by pouring cold water on the Bush-lied myth. It exposed Joe Wilson as a fraud, found that Iraq had actually increased its anti-U.S. terror planning in 2002, and provided a detailed account of how the intelligence community had reached its consensus that Iraq had weapons of mass destruction.

Kerry's own history on Iraq also complicates his making the case that Bush lied. It's tempting, but we won't return here to the list of hawkish Kerry statements on the threat posed by Saddam Hussein's Iraq. What we can say is this: From 1996 through the Iraq war last year, John Kerry regularly advocated the use of force, unilaterally if necessary, to remove the Iraqi dictator. He did so before the Bush administration even began to make its case for war. He was such a strong advocate of regime change throughout the late 1990s that Paul Wolfowitz once singled Kerry out by name as a Democrat who understood the Iraqi threat. Those days of consistency disappeared, however, with the election of George W. Bush.

And Kerry's speech last Friday was only the latest example. The content of the speech was reminiscent of Al Gore's recent vein-popping rants, although Kerry wasn't as wild-eyed in his delivery. "The truth is, when it comes to Iraq, it's not that I would have done one thing differently," he said. "I would've done almost everything differently."

Everything, that is, other than change his vote. John Kerry says he was misled into an unnecessary war. He also says he'd vote for it all over again.

Uhhhh...actually, Sen. Spitball, that's been going on for over 6 months.

You might consider paying someone to keep you up to speed on current events.

Heheheh. After the convention ended, I drifted off for a few minutes, lulled by the sights and sounds of people departing. But then, suddenly I was awakened by that braying mule voice of Kerry's as he swaggered and staggered around in Ohio. I was dumbfounded. I had read that he wanted to hold a midnight rally, which oddly reminded me of Clinton's midnight basketball schtick, but I really didn't think Kerry would do it.

When (not IF) he loses this election just about all he has to point to as a reason is that appearance in Ohio. Pathetic isn't a strong enough word.

"I voted for the war before I voted against it before I flip-flopped again. And there's still a month left for me to change my mind several more times."

Kerry's comments through 1999, and his comments today reveal just how reliable he is. If you can't trust him to be steadfast in his views, how can you trust what he says leading up to the election.

Today I favor the war. Today I don't favor the war. Well Senator, the basic facts didn't change. The only real change was that Bush was President, not MIA Clinton or the ghost Gore.

5 posted on 09/04/2004 2:10:31 PM PDT by DoughtyOne (US socialist liberalism would be dead without the help of politicians who claim to be conservatives)
[ Post Reply | Private Reply | To 1 | View Replies]
To: Texas Eagle
Nobody has attacked Kerry's patriotism. That is a phony, Max-Cleland-like charge.

He's demonstrating, every time he opens his mouth, his unfitness for the highest office in the land.

6 posted on 09/04/2004 2:11:28 PM PDT by sinkspur ("What's the point in being Pope if I can't wear the tiara?"--Cardinal Fanfani)
[ Post Reply | Private Reply | To 2 | View Replies]
To: kennedy
The risk for Kerry is that in a campaign devoted largely to convincing voters of his strength, assuming the mantle of victim does little to inspire confidence.

Bingo. This has been apparent ever since Kerry starting in with his "Mommy, make them stop!" whining. The media instead chose to portray that as "strength."

Click here for the 'tator take on the Bush Bounce

John Kerry is a risky scheme.

I hope that you are correct and that Thursday night in Ohio was Kerry's Howard Dean scream.

John F Kerry is unfit to Run for POTUS

In the wise words of Harry Potter, he's a nutter. Who does he think he is doing a midnight event, J.K. Rowlings?

Dick Cheney is a skilled fisherman. He cast the bait on Wednesday night and Kerry took it on Thursday night. Cheney has now handed the pole to Karl Rove and is letting him reel Kerry in slowly, whilst he flip-flops in the water. 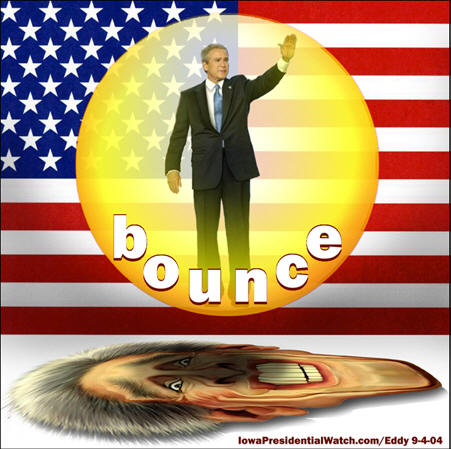 I don't hold anyone to per se holding a position. But when they change a position, they darn well better have a coherent explanation. And the more important, or deeply held the original position, the more compelling the explanation for change must be.

Kerry is an obvious con man, a shell. I am in awe of the power of the media to cover for this phony.

Democrats use to get elected by the virtue of their lies. That day is SOOO over. And the amazing thing is, they still don't know it. They really do think we are all out here in the heartland amazed by Kerry and Edwards. They still think we want to "get rid" of President Bush.

When the truth hits them on that first tuesday in November, watch out! The democrats' mental illness and their acting out will be the big story. They are going to throw a fit like never seen before. It's going to be the last gasps of their communistic dreams and they will not go pretty into that goodnight. I can'r wait!

As it turns out Kerry does not even have a strategy to win the campaign - how is he going to put together a strategy to deal with Al Qaeda? The whole DNC organization is just coming unglued - staff, candidates, press and all. Tiem for them to get a new party that stands for something.