For John Kerry, this religion thing is a problem. On the one hand, he wants to appeal to Dem elites who tend to be (let's face it) more secular than not. On the other hand, he doesn't want to offend the vast majority of voters who consider themselves religious folk, especially black and Hispanic Democrats.

Unlike George Bush, John Kerry has to straddle not only the difference between his base and the swing vote on religious themes, but a radical difference in taste between key constituents of the Democrat Party.

A June Time magazine poll, for example, showed just 7 percent of likely voters consider Kerry a man of strong religious faith. At the same time, a third of Kerry voters agreed that Bush's "intense religious views" worried them. How to walk that fine line? Kerry on the stump alternates between references to himself as a man of faith, with pronouncements of his strong faith in that "beautiful line" separating church and state in America. Another strategy? Market segmentation: Kerry's campaign recently began running Spanish-language TV ads in Spanish with "Faith" as a theme.

But for a real glimpse of how difficult the religion thing is for Kerry, take a look at the Democrats' checkered efforts to hire a director of religious outreach.

The Kerry campaign's first choice was a woman named Mara Vanderslice, who came to Kerry after occupying a similar position in the Dean campaign. Mara's fall from grace with Kerry came after the Catholic League outed her as a hard-left activist, according to the Washington Times: "The campaign began to marginalize Miss Vanderslice when the Catholic League for Religious and Civil Rights mounted a public campaign against her, saying she spoke at a rally co-sponsored by the homosexual group AIDS Coalition to Unleash Power (Act-Up) and should be 'working for Fidel Castro.'"

Miss Vanderslice was muzzled, ordered not to speak to the press, leaving (as Amy Sullivan, a specialist on religion and the Democratic Party who addressed the Democratic Leadership Council last fall on "God, Guns and Guts," freely confessed to the Washington Times) "no one in their communications shop who is conversant in religion."

On July 23, the Democrats tried again. According to UPI, the DNC appointed one Rev. Brenda Bartella-Peterson, a Christian minister (Disciples of Christ) as the Democratic Party's senior adviser on religious outreach. "Brenda will act as liaison to religious organizations and will encourage people to let their faith inform their participation in democracy," DNC Chairman Terry McAuliffe said. She comes to the Kerry campaign from her post as executive director of the Clergy Leadership Network. This is how the CEO of the CLN describes their "niche" on the organization's Web site: "We are moderate and liberal and even centrist. But the political center has been pulled so far right that we look like radical leftists."

"Brenda has dedicated her life to showing us all how religion and politics intersect with integrity," McAuliffe said. "We are proud to have her join the DNC, in order to spread John Kerry's positive vision to people of all faiths."

Now we find out that the Rev. Bartella-Peterson worked to get God out of the Pledge of Allegiance. She signed an amicus brief urging the Supreme Court to declare the pledge unconstitutional. She's entitled to her position, surely, but it does lead one to ask what exactly is Kerry's positive vision to people of all faiths?

What explains this ineptitude? Is the Democratic leadership unable to vet or simply unable to find a religious adviser whose views are simpatico with the American people? As Catholic League President Bill Donohue quips: "If Peterson were a plant by the Bush camp, we'd understand it. What we don't understand is political suicide."

For a guy like John Kerry the hardest thing is keeping the lies straight, having to remember what you said in front of each crowd that wanted something different. If you have a position and you stand by it this is easy, but Kerry has no position he makes them up as he goes along and keeping them all straight is near impossible.

I'm so glad I'll be around for the great Democratic implosion.

Kerry worries about the lies he tells (to his credit...sort of). Clinton shrugged off critics and, having NO conscience, didn't have a care about getting caught. Clinton knew his base didn't care, or was too dumbed-down, to explore for truth. (still are)

You think God's trying to send Kerry a message?

And who was Bidden talking about? The people at my church or the people that flew planes into our buildings? 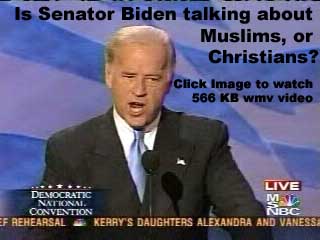 Our friends on the other side love to quote the Bible.
Just as Joshua's trumpets brought down the walls of Jericho, just as American values brought down the Berlin Wall,
So will radical Fundamentalists fall to the terrible swift power of our ideas as well as our swords.
7 posted on 08/04/2004 12:25:07 PM PDT by DocRock (Check my homepage for more "home movies" of the Kerry campaign)
[ Post Reply | Private Reply | To 1 | View Replies]
To: Melpomene
That's what happens when you pander to every conceivable group in the country.

When a candidate starts changing advizors in the middle of a campaign, as Kerry has done, usually big troubles lie ahead. [Look at Dole in 1996.]

Think about this for a moment. 67% of likely Kerry voters are not concerned about Bush's religious views. That's not bad at all. President Bush is respected for his religious views even by those that don't support him politically.

Remember when it was reported that President Reagan's schedule was influnced by an astrologer? He was attacked as a hypocrite for his religious views.

Kerry's problem is that he is looking at polls to help him determine what his religious convictions should be. In his attempt to please all, he is offending all.

Conservatives might have trouble explaining Reagan's fault with respect to the astrologer, but most would agree he was a Christian. Kerry is viewed as someone with no religious convictions and willing to say or do anything to get elected.

In other words, "a Democrat."

"I don't want to say that God is on our side...". Well, John, I wouldn't really worry too much about that! One thing is certain: God is not a registered Democrat!

Democrat presidential candidate John Kerry has replaced his religion adviser with a woman who was one of 32 clergy members to file a friend-of-the-court brief on behalf of the atheist who challenged the words "under God" in the Pledge of Allegiance.

According to the Catholic League, the Rev. Brenda Bartella Peterson's amicus brief on behalf of atheist Michael Newdow "shows infinitely more concern for the sensibilities of atheists like Newdow than it does for the 90 percent of Americans who believe in God." Peterson replaced Mara Vanderslice as director of religious outreach.

Democratic National Committee chairman "Terry McAuliffe says the appointment of Rev. Peterson as the new Senior Advisor for Religious Outreach 'reflects the DNC's commitment to reaching all people of faith,'" said Catholic League President William Donohue. But Peterson's background makes one question whether the Democrats have lost their minds, he said.

"He also notes that she 'will act as liaison to religious organizations.' Upon learning of this appointment, we decided to find out who this woman is. And what we found will make people of every faith wonder whether McAuliffe and the DNC have totally lost their senses," Donohue said.

"And this is the person the Democrats want to dispatch to meet with the heads of religious organizations? Are they out of their minds? Would they hire a gay basher to reach out to homosexuals?" he asked.

Donohue said the Democrats "stepped in it again" by hiring Peterson, considering her connection to the Pledge of Allegiance case.

Donohue said the Democrats are "0 for 2 in appointing senior religious liaison directors." First, Kerry's campaign appointed Vanderslice, "but when we exposed her as a radical leftist who associates with anti-Catholics, the Kerry staff silenced her. Now they've stepped in it again by selecting Rev. Peterson," Donohue said.

"The selections of Vanderslice and Peterson suggest that either no one bothers to vet candidates for religious outreach, or the elites making the choices are anti-religious. If the former is true, then this shows that the Democrats place no priority on appealing to people of faith," he said.

"If the latter is true, then Kerry needs to bring in a big broom and clean house," Donohue said.

Who said that, Karl Marx?

1. The ineptitude of the DNC in lining up their religious outreach program is that matters of faith are far, far too alien to them. They've ignored faith matters because they think that folks who live faith-centered lives are gap-toothed, ignorant hicks who normally are not worth their time. But the DNC lamely comes crawling around when they think the election will be close.

2. Another religion/faith problem for Kerry is his position on gay marriage. Black pastors have come out strongly against gay marriage. Is there a way for GOP strategists to tap into this social wedge and peel off some socially conservative black voters to Bush's side?

3. Do you remember when Howard Dean was flying high in the polls (before the primaries began)? He said that New Englanders don't really talk about personal faith matters the way southerners tend to. He said he would talk more about faith when he headed down south for the primaries. This just rang phony and contrived to me. People see it as insincere. The same thing will happen to Kerry if (when) he tries it.

4. Ever since the Dem convention broke up and his bus tour began, we've seen Kerry stepping on his own dork over and over again (loving Buckeyes in Michigan, rebuffed by Marines at Wendy's, the Milwaukee food flip-flop, etc....). Perhaps we should just sit back and enjoy it while he implodes on his own.

Kerry's major religious blunder, to date, was to align himself with the certifiable religious haters who came crawling out of the woodwork to denigrate Mel Gibson's monumental film, The Passion of The Christ.

If Kerry had any religious pretensions at all, he would have praised it at the time some 600 million Christians (and voters) were in the film's thrall.

Far from that, Kerry aligned himself with the religious hating liberal Hollyweirdos, major hater ADL Abe, media pundits--even so-called conservatives like Krauthammer--- all who marched in lockstep, like latter-day brown shirts, to denigrate The Passion and revile believers.

We must never, ever, let the Christian community forget what Kerry did.

When push came to shove, Kerry showed his true colors.

Kerry on religion? It's in there. Right in the article. "get God out."

"Now we find out that the Rev. Bartella-Peterson worked to get God out of the Pledge of Allegiance. She signed an amicus brief urging the Supreme Court to declare the pledge unconstitutional."

This needs to go in a bush campaign ad immediately. Kerry's "religion" advisor tried to take "under g-d" out of the pledge of alleigance.