New York will ban people from carrying firearms into many places of business unless the owners put up a sign explicitly saying guns are welcome.

TOPICS: Business/Economy; Local News; Society
KEYWORDS: 2a; banglist; firearms; ny
Gov Hochul is having a meltdown in Albany. Reeeeeeeee. Feel free to freep a poll at the local Buffalo radio station. Half way down on the right, under the Ray Lak Honda banner

Based on the ruling, I don’t see how they would have the authority to ban guns in any business. This would be tantamount to defining all businesses a protected area.

There is also an enforcement problem. If someone carries concealed and is not intending to rob, how will the store owner know?

Gov Hochul on the radio > The State will assume ALL business’s are gun free zones, unless the store owner puts up signs declaring guns are allowed in his store.
That would ANTIFA create a list of business’s to strike and destroy.

Also, something about rules for guns in cars. I did not understand that car angle

The latest case did not address carrying a firearm in a vehicle.

So just like with Heller, where those hostile to 2A said “ok, you can have it home, but not outside”, now that the court has addressed the outside, they want to clamp everywhere else.

Currently there is a fed statute whereby if the gov violates your “civil liberties”, the gov can be sued to pay for the victim’s legal fees.

“Civil liberties” are the civil rights era stuff associated w/racism and is how the ACLU lines its pockets - taking up those cases and getting “paid” for each win.

We need a comparable statute for Bill of Rights violations. Maybe then you wouldn’t see this constant needling from these tyrants.

Are signs Kryptonite? They will not keep a single gun out of anything. The Hochul and her minions are having what would normally be called a temper tantrum. They aren’t about to cope with being told “no”.

have you stopped beating your wife poll question...

half the people voting yes probably didn’t understand the question.

“They will not keep a single gun out of anything.”

Too many times the least obvious is the biggest point. And without backing off on gun control, the libs there have finally done something that works using the exact opposite of what they are trying to display...on purpose.

If you are a bad ass, or think you are, are you stupid enough to go into a store intending to start violence if there is a sign on the front door that says guns are welcome? Not if you are sane.

For years the gun lobbyists have been trying to prove this point that guns are a deterrent and if they are present, everyone’s equal. Bad people don’t want equal, they need advantage. And if the bad guy walks into a store that has five people in it and every one could be a cc, your odds of success just got lowered without a shot being fired.

So I don’t look at this move as being intrusive. I see the anti-gun left admitting defeat that no guns is not the answer. But quiet ones are the way to go. Winner.

Wouldn't that be a good thing?

I would want to patronize a business with such a sign. 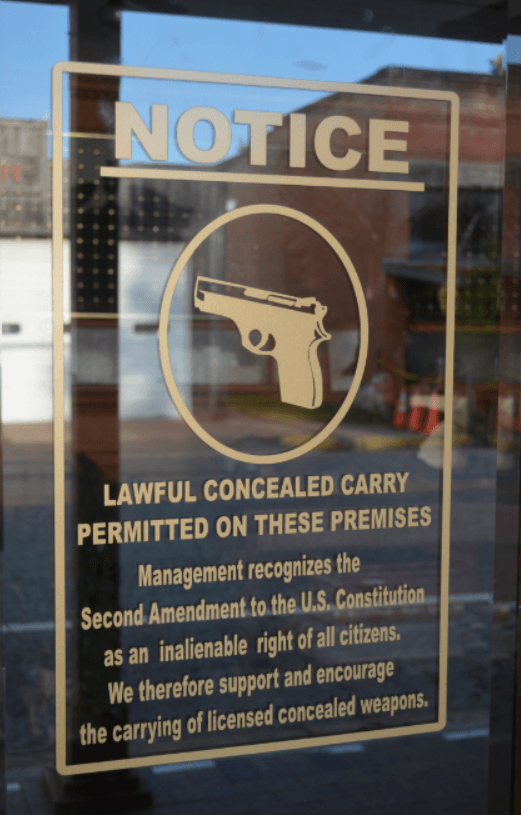 The only place I think should ban guns is places of business who do more than 51% of their business selling alcohol. Works in Texas.

NY Govs are always up to shenanigans ...

Its in the job description

Yup, if NY left it to bars, there would be no uproar.

“Based on the ruling, I don’t see how they would have the authority to ban guns in any business.”

They cannot, but they will try.

More specifically, the majority and concurring opinions reaffirmed the historical right of government to ban firearms from certain “sensitive places” (i.e., schools and other government buildings), but rejected the State’s argument that the “proper cause” requirement for CCW is a “sensitive place” law and restriction. As Justice Thomas explains at pages 21-22 of his opinion:

“Although we have no occasion to comprehensively define “sensitive places” in this case, we do think respondents err in their attempt to characterize New York’s proper-cause requirement as a “sensitive-place” law. In their view, “sensitive places” where the government may lawfully disarm law-abiding citizens include all “places where people typically congregate and where law-enforcement and other public-safety professionals are presumptively available.” Brief for Respondents 34. It is true that people sometimes congregate in “sensitive places,” and it is likewise true that law enforcement professionals are usually presumptively available in those locations. But expanding the category of “sensitive places” simply to all places of public congregation that are not isolated from law enforcement defines the category of “sensitive places” far too broadly. Respondents’ argument would in effect exempt cities from the Second Amendment and would eviscerate the general right to publicly carry arms for self-defense that we discuss in detail below. See Part III–B, infra. Put simply, there is no historical basis for New York to effectively declare the island of Manhattan a “sensitive place” simply because it is crowded and protected generally by the New York City Police Department.”

Hochul has illegally declared that all private businesses are sensitive places unless the business owner publicly states otherwise — regardless of the number of occupants or availability of police protection — which is the very argument that the Court rejected.

Yup, and in NY the “protection” argument is a joke. There is a case a few years back where it was determined that the police have no “duty to protect”.

It came about from some guy fighting off an attacker on the NYC subway while a few cops just sat there and watched.

I don’t think it made it to the USSC but it go to the NY appellate I think.

I don’t read he Slimes, but the link is subscription only.