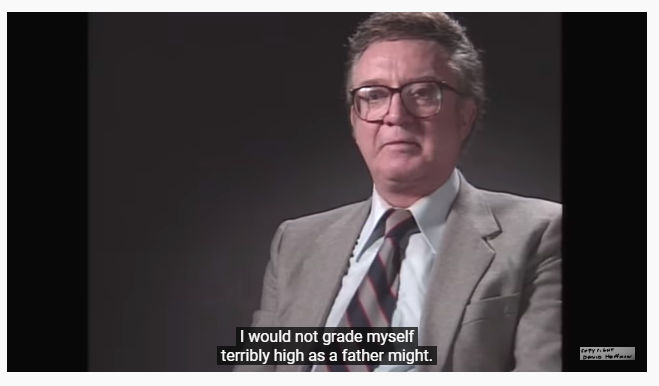 Oh, okay. It’s Steve Allen. More of a comedian than an actor really...

Yeah, I’d forgotten about him. Great interview though.

I recall one of his sons was involved with the Children of God or something similar.

You can read much of what Allen says here in Proverbs.

6 posted on 06/08/2021 11:49:48 AM PDT by miserare ( Respect for life--life of all kinds-- is the first principle of civilization.~~A. Schweitzer.)
[ Post Reply | Private Reply | To 3 | View Replies]
To: ransomnote; GOP_Party_Animal; miserare
I am among the first of the Baby Boomers, graduating high school in 1964, and consider the Millennials/Snowflakes a product of the failed attempt at maturity by the most popular and influential part of my generation. The below essay explains my position.

Celebrating the Woodstock concert that began August 15, 1969 highlights the worst generation this country produced until it formed breeding pairs. This Baby Boomer vision ignored those qualities which made the United States the Arsenal of Democracy. Their parents were the Greatest Generation, but too few offspring looked to emulate the noble character traits that saw their parents through the Depression and WW II.

These same parents were responsible to the extent they applied the misguided teachings of Dr. Spock. His definition of common sense could not balance love and affection with standards for behavior, self-control, and respect. For too many parents, common sense meant providing every advantage they had missed. In the process of catering to children’s feelings and preferences, they raised defiant, narcissistic offspring who viewed gratification as a right. Rather than examples to emulate, parents were merely vending machines required to fulfill material desires during a time of unimagined plenty.

These Boomers grew up with an unprecedented focus on self. With them the divorce rate first exceeded the marriage rate, and there was first enacted a Federal Support Enforcement program to track deadbeat dads. Prior to the 60’s, syphilis and gonorrhea were the widely known venereal diseases, but the virulent strains exploded until only professionals could keep track.

This generation achieved self-actualization through moral exhibitionism and militant self-absorption. These Boomers adopted civil rights as their signature cause once the Civil Rights Act of 1964 became law and expressed a popular virtue. This law was enacted just as the first Boomers graduated from high school, and therefore provided them numerous opportunities to express costless compassion. The generations, which achieved maturity in the 30’s, 40’s, and 50’s, were those that triumphed for human rights against formidable opposition.

The Vietnam War gave the Baby Boomer generation a chance to sacrifice in a noble cause. Because here a small country (including ethnic Chinese, Catholic Vietnamese and others fleeing Communism), and newly free from colonial rule, sought United States help in establishing self-rule and the means of self-defense against a totalitarian neighbor (Tonkinese) bent on conquest. Instead, many chose to distance themselves from those adult realities by calling this fight an immoral war, and thereby implying that they would be the first to volunteer for a moral war, which of course is an oxymoron.

The WW II veterans who were their fathers and grandfathers, related to these children through reticence or stories that service can only be a duty. Instead of recognizing their turn had come, the Woodstock children sought safety by choosing to regard the war as an unjust, barbaric imposition. Jane Fonda and John Kerry were there to affirm this delusion by leading the swarm which regarded those who served as lunatic, drug addicted, baby killing, fascist pigs. Through their popularity and self-veneration, they were able to subject those who did serve to a comprehensive negative mythology.

When the Woodstock generation obtained positions of power, they sought policies of moral diversity/perversity and material comfort to transform the country into just another Gulag of apostasy, greed, and dependency. As they look to retirement, Boomers demand continuation of unsustainable entitlements in a manner freeing them from financial worries, from any need to care for their neighbors, and from facing the specter of national bankruptcy.

Worse than their simple existence is that they begat through multi-generational psychological incest a legacy of ideologically mutant children and grandchildren. These Woodstock offspring have become popularly known as the “Snowflakes” of present times. These descendants are contra-educated to abhor the Constitution, the virtuous and valorous founding of our country, and classical liberal principles found in values of the Enlightenment. They are perpetual children; are without essential humanity. They are empty, ignorant, feckless, emotional, overactive, and under challenged.

It seems to me all suffer from SISD or Self-Induced Stress Disorder.

The Case Against Liberal Compassion https://imprimis.hillsdale.edu/the-case-against-liberal-compassion/

Your Help is Needed - Consider Sponsoring a Millennial Today https://www.youtube.com/watch?v=RGvrmltfMrA

He was funny and also wise over the years. He also pretty much founded The Tonight Show and the talk show format.

I didn’t even think he was still with us.

Ultimately, I think the problem is that every generation wants their kids to “have it better” than they did. Well intentioned, but unsustainable. The Spartans probably had a better system. Just make every generation go through The Ordeal.

I’d call him a humorist.

Funny with wisdom and insight.

12 posted on 06/08/2021 12:37:03 PM PDT by UnwashedPeasant (Trump is the last legally elected U.S. President.)
[ Post Reply | Private Reply | To 1 | View Replies]
To: Retain Mike
Their parents were the Greatest Generation, but too few offspring looked to emulate the noble character traits that saw their parents through the Depression and WW II.

Or perhaps you are referring to their electing LBJ?

Face it, the boomers were screwed over by the Most Commie Generation.

When they got to collage the MCG continued to pour poison all over them.

Despite their hard work and conservatism they got blamed for all the Socialist and out right communist choices the MCG made. They paid for MCG programs with their own blood and treasure.

Now they are growing old.

They are being told that they system they never set up but always paid into will not be there for them.

And that they are selfish for even thinking it could be.

This is the system MCG set up, never paid into, drew out of and spent with reckless abandon to keep themselves in power.

Until you get down to under a thousand people and the enemy is at your gates?

Not so much. There is a reason those sodomites are not around any longer.

I never said all their character traits were noble. The majority of Baby Boomers chose the valleys instead of the peaks; close poorly instead of well.

Wise words from a father who knows regret for his mistakes with his children. I am a mother who knows that sort of regret. Didn’t have the wealth he did, but oh, how painful it is to now see clearly the mistakes made, that have caused real problems in my childrens’ lives.

there is too much dumbth in the world

17 posted on 06/08/2021 1:40:10 PM PDT by mjp ((pro-{God, reality, reason, egoism, individualism, natural rights, limited government, capitalism}))
[ Post Reply | Private Reply | To 1 | View Replies]
To: Retain Mike
I am among the first of the Baby Boomers, graduating high school in 1964, and consider the Millennials/Snowflakes a product of the failed attempt at maturity by the most popular and influential part of my generation. The below essay explains my position.

You indict the Greatest Generation for raising Baby Boomers, indict Baby Boomers for raising "Woodstock offspring" millennials, then say they all suffer from "Self-Induced Stress Disorder."

Your Humanity Sųx screed does not offer a position any more than an opinion of broccoli would.   A huge percentage of Baby Boomers abhor Jane Fonda and John Kerry.   Your claim that is a generic trait of Baby Boomers is not true at all.

Steve Allen was worth hearing from.

You must not have read what Allen said. You should have before you wrote your long line of crap. He said not a word about “Boomers.” That was a headline something got out of thin air.

“And boy was I wrong.
You have to spend much time with them.
You probably have noticed
that either in the 60’s or a 1,000 years from now or last night...”

He says a father has to spend time with their kids.

And, Boomers are not the first generation of humans that sinned, that were selfish. Have you noticed your surroundings lately, have you read history?

Check out Meeting of Minds on youtube. I ate it up in home school.

(could be the start of something big):

Appears to have been performed by Allen and his guests in a single take.

He wrote the song.