The Pentagon’s release of “hard to explain” UFO information is a departure from an intolerable norm. The decades of denigration of honest sighting reports continue to give off a palpable stench of dishonesty. The question now is “…And…?”

The good news is that there is now official acknowledgment of something everyone’s known for years – There are weird things flying around and millions of people have seen them since World War 2. The official release of information is also welcome.

Check out the coverage of the release; it’s pretty straightforward. These are the things that don’t have easy explanations, or in some cases any explanations. The sheer scale of online and other media exposure many sightings have had precludes any claims they didn’t happen.

The logic that something inexplicable doesn’t exist can’t work for a nanosecond. You have an observation whether you like it or not; what are you going to do with it? Not much, evidently. The lack of scrutiny of these phenomena is itself inexcusable.

Real science is about what we don’t know. Any fool can recite known facts. Any idiot can insist on what they were taught in grade school, obsolete as it probably is. Yet virtual gigatons of observation of unexplained things are getting such simplistic, downright disingenuous reactions? Like hell. Show me any engineer, scientist or even basic human who doesn’t want to know what these things are, and how they work, and I’ll show you a liar. The Big Silence on UFOs is the scientific equivalent of the Big Lie, and equally useless to humanity.

There’s an irony here. Public exposure of this information could generate some actual thought, for a change. Not everybody spends their lives assuming countless verified observations can’t be true. Not all physicists and engineers refuse to think.

TOPICS: UFO's
KEYWORDS: aatip; fringe; pentagon; ufo; ufos Navigation: use the links below to view more comments.
first 1-20, 21-40, 41-45 next last
1 posted on 03/23/2021 5:39:00 PM PDT by RoosterRedux
[ Post Reply | Private Reply | View Replies]
To: All
This article makes the point that, even if there is no government disclosure (i.e., explanation as to what is "unidentified"), a new openness on this subject will be healthy.

Yes. It is OK to see something that cannot be identified.

I saw a UFO today.
It was floating in the air very high up.
I have no idea what is was.
I could not tell if it was a crow or a hawk or a buzzard.
It remains an unidentified flying object to me.

the ufos were reprogramming the dominion voting machines.

My we do get exercised don’t we. This fellow needs to review Donald Rumsfeld on “known unknowns” and “unknown unknowns.”

Don’t stand under it and look up. You may get an eye-full.;-)

Someone owes Bob Lazar an apology

Lin Wood stands ready to defend you if they sue for defamation.

A junta has seized the government in a coup. The secret police is rounding up dissenters. We are in lockdown for a year. The economy is grinding to a halt as we explode the greatest debt in human history. Millions of Mexicans, moslems, Central Americans etc are flooding in across the open border.

I don’t honestly think people who read a wee article on UFO’s are going to forget that we have just been victims of a coup.

So why this sudden move to bring the UFO controversies into the public psyche?... Think of what we are ignoring that is killing America, as we are made to focus upon ‘a mystery’, that is not at all a mystery to the ones dribbling the data out.

lin wood will be disbarred or in the booby hatch by then. or both. 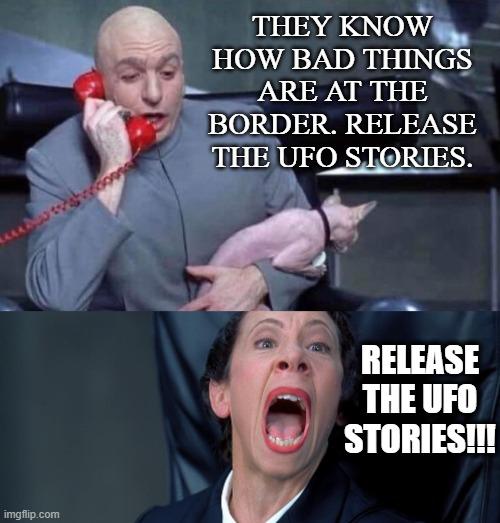 13 posted on 03/23/2021 5:56:20 PM PDT by 4Liberty (Honest GOP can’t use legal options cause Dems use illegal ones (threats). The Robert Creamer Party! )
[ Post Reply | Private Reply | To 9 | View Replies]
To: MHGinTN
This UFO thing has been coming for the last 60 years. And I seriously doubt it is going to replace in our consciousness the current destruction of freedom that is occurring in our country.

If you find them too distracting, perhaps you should avoid these kinds of threads.;-)

"Childs, Childs....Chariots of the Gods, man. They practically own South America. I mean, they taught the Incas everything they know."

How’s his disbarment proceeding coming? I haven’t heard anything about that for a while.

There have been 'weird things' flying around since human history began to be recorded.

Have a look at Jacques Vallee's recent 'Wonders in the Sky', or 'Passport to Magonia'.

The UFO nuts are convinced that this is “disclosure”. The “logic” goes that ever since Roswell or thereabouts the government has been slowly dribbling out information to prepare the public for the knowledge that aliens exist. Humanity just has to be at the right point in its evolution. It has to be ready to accept it. Yes, they really think that’s what’s been going on for decades.

It’s nonsense. And if there is any government conspiracy here at all, other than the usual attempts to distract people from advanced military tech like in the 50s through 90s, it’s far more likely to be a fake announcement to help usher in one world government. OWG is something that we know people have actually been working toward. And with drone and deep fake tech being so advanced, it would be the perfect time to do it.

How come nobody ever heard about Roswell after the first few days of the initial ‘splash’ - until somebody decided to bring it up decades later?

Roswell resurfaced when Stanton Freedman found and interview the AIR fORCE MAN who initially reported Roswell discovery of wreckage. When Jesse dies, Stanton continued to work with Jesse’s son, continuing the story that others opened up about once the initial exposure happened.