Already, the number of National Guard troops in the nation’s capital from around the country has grown to about 21,000, Army Gen. Daniel Hokanson, chief of the National Guard Bureau, told Vice President Mike Pence at a briefing Thursday.

The soldiers and airmen from Washington state will support their federal partners in roles determined by the lead federal security agencies, the Washington National Guard said Thursday.

Biden and Harris will be sworn in at the same location where the violent, pro-Trump mob descended on the U.S. Capitol, but the two events aren’t comparable from a security standpoint, said Michael Plati, U.S. Secret Service special agent in charge, who is leading the inauguration security.

The inauguration is designated as a “national special security event,” which clears the way for communication, funding and preparation between multiple agencies in Washington, such as the Capitol Police, Pentagon, Homeland Security and District-area police. Other such events are the president’s State of the Union address, the Super Bowl and the Democratic and Republican National Conventions.

TOPICS: Business/Economy; Conspiracy; History; Local News
KEYWORDS: biden; guard; inauguration; washington Navigation: use the links below to view more comments.
first 1-20, 21-40, 41-60, 61-69 next last
Biden hasn’t expressed concern about his own security at the inauguration. “I’m not afraid of taking the oath outside,” he told reporters Monday. “It is critically important that there’ll be a real serious focus on holding those folks who engaged in sedition and threatening the lives, defacing public property, caused great damage - that they be held accountable.”

The Washington National Guard must've been sleeping while Seattle burned during the summer of love. Unity. 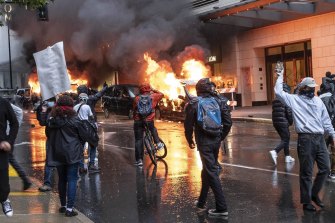 Couldn’t be bothered to call out the guard to stop the looting....Of course not..It’s only happening to the little people and they don’t count......

So, 4,500 WA Left Wing State NG are coming all the way across the country to provide personal bodyguard support for Deadbrain Daddy Joe’s election stealing sendoff into history as our next prez? He AIN’T MY PREZ. I didn’t vote for the scum and will not ever call him my prez. Just as I did not call the half black guy my president.

I read somewhere that the Reserves and NG are behind in the two-week drills due to COVID and this is being used to catch-up on their obligations.

Anybody think this is why there are more troops in DC since the Civil War?

He’s not afraid of taking the oath outside, but he is afraid to go to DC for a rehearsal? What a blowhard!

To: Andy from Chapel Hill

So overboard. I believe they (Dems) intend to assassinate Biden during the inauguration and are going to frame and blame a Trump supporter. After that, they will designate any MAGA movement domestic terrorism. If we are domestic terrorists, they can take our property.

I’m very afraid of what they are setting up right now in DC.

I wouldn’t be surprised if they were behind on their service obligations, but I don’t think this is why they were called up.
This is just more conditioning for us rubes.
2020-2021 will go down as the grandest PsyOps event in human history.

“After that, they will designate any MAGA movement domestic terrorism.”

I’m watching a show on Netflix called “Secret City” set in Australia. Intrigue with China, used as a set up for the new laws “The Safer Australia Agency” that sets limits on information and free speech.

It will be interesting to see how the show will mimic Biden and his Chinese handlers.

10 posted on 01/16/2021 4:10:03 AM PST by 21twelve (Ever Vigilant. Never Fearful!)
[ Post Reply | Private Reply | To 8 | View Replies]
To: EEGator
The inauguration is designated as a “national special security event,” which clears the way for communication, funding and preparation between multiple agencies in Washington, such as the Capitol Police, Pentagon, Homeland Security and District-area police.

There it is right there.

Things are not heading in a good direction.

Hmmmm, 400 LESS peacekeepers in Seattle.
What could go wrong?

“Anybody think this is why there are more troops in DC since the Civil War?”

I believe the troupes will be needed when Prez Trump calls Martial Law and brings in the Military. Remember he said “I will never let this country turn socialist. He has kept all of his promises so far. IMHO

What kind of “leader” needs 30k soldiers to protect him?

Good for Trump refusing to be part of this installation of a thief.

Hope is President to President letter just says “F—k you.”

If there is any trouble I suspect that it will be caused by pantifa/blm thugs wearing MAGA items. No patriot in their right mind should go to any public gubmint sponsored event at any federal location.

We must concentrate in our states on correcting any voting related law that is lax enough to allow fraudulent voting. Direct your angry/disappointment letters and emails to your congress-critters. Yes they ignore us for the most part but if the volume is high enough, we can turn the tide.

MIKE PENCE AGAIN! And he just visited the 10th Mountain Division of the US Army in upstate NY. A lot going on here.

Suddenly, the left is in LOVE with the National Guard, whom they were throwing bricks and Molotov cocktails at just months ago.

Someone smarter than me can post this image. https://www.thirteen.org/blog-post/u-s-army-units-explained-from-squads-to-brigades-to-corps/