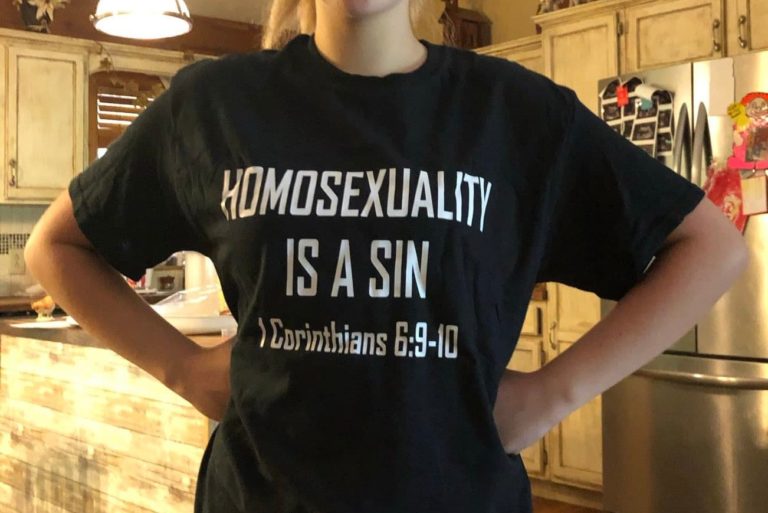 A homophobic pastor is threatening to sue a public high school in Tennessee after his daughter was sent home for wearing an anti-gay t-shirt.

Rich Penkoski, leader of extremist anti-LGBTQ hate group “Warriors for Christ,” told the Christian Post that his daughter’s First Amendment rights were violated after she was told to leave Livingston Academy in Livingston, Tenn.

“My 15 year old was thrown out of school for the day for wearing this shirt,” Penkoski tweeted last month. “#lgbt wants to trample on your #freespeech rights while they cry for special rights.”

Speaking to the Christian Post, Penkoski said that Brielle was sent to the school’s principal, Richard Melton, who asked her to remove the shirt because of its “sexual connotation.” When she refused, she was sent home, he said.

Penkoski complained that one of the school’s teachers had an LGBTQ Pride sticker in their classroom featuring the words, “Diverse, Inclusive, Accepting, Welcoming Safe Space For Everyone.”

He seemed perplexed as to why Melton would allow the sticker, but not his daughter’s homophobic t-shirt, and said that Brielle wanted to “express her values.”

“She wanted to do this on her own. She wanted to go there to…express her values like all the other kids do,” he said. “They’ve got kids walking around with the pride symbol on their sneakers and pride clothing and nobody bats an eye.”

Penkoski continued: “She was basically censored. It’s not fair…that she’s told that she can’t wear that shirt and other people can wear the stuff that they wear.”

TOPICS: Chit/Chat; Education; Local News; Religion; Society
KEYWORDS: antichristian; arth; bidenvoters; gaystapo; homofascism; homosexualagenda; lavendermafia; livingston; penkoski; sodomandgomorrah; tennessee; warriorsforchrist Navigation: use the links below to view more comments.
first 1-20, 21-40, 41-60, 61-63 next last
Must've killed the libtard author that he had to include the father and daughter's side of the story...notice how he made sure to declare the father 'homophobic', again and afgain.
1 posted on 10/02/2020 7:10:07 PM PDT by simpson96
[ Post Reply | Private Reply | View Replies]
To: simpson96

Proceed with the lawsuit!

I teach at a public school and saw a kid with a “straight pride” shirt.

"Support Metro Weekly's LGBTQ Journalism For as Little as $1.15 a Week"

Next week send her to skool with a “Kill A Commie For Mommy” t-shirt.

I would also add that a request from a male principal that she "remove" the shirt is entirely inappropriate and probably grounds for the principal's "removal."

I have come to believe that school uniforms, even if only a white button down shirt and khaki pants for both sexes, is desirable.

Take the possibility for this kind of distraction out of the picture altogether. You and I both know that right now, this is almost certainly a one-way street, and our side isn’t included.

We can start getting control back by refusing to use their words and phrases. Speak loud and often. Speak our minds.

Or through it back in their faces:

WE WILL NOT BE SILENCED.

hehehe. must be tired.

Wanting supremacy, extra rights and privileges is not equality. Someone that has an intense irrational fear of something, is not going to wear it on their own tshirt. This phobia bullshit irritates the hell out of me. If they’re going to send her home with that, their pride shirts shouldn’t be allowed either.

Anyone who labels a person "homophobic" for opposing homosexuality should be charged with slander or libel. And the "hate group" is one that does so.

A phobia denotes fear of something, in this case ‘homophobic’ would denote a fear of homosexuals, and of homosexual attraction and relations, and or of becoming a homosexual.

However, even though some person’s opposition to homosexuality and all that entails may be driven by that fear, yet the term is broadly used in the pejorative to label any and all who disagree with or oppose homosexuality and its relations, or even those who refuse to affirm the same.

And as such this use is not accurate but is a psychological tactic designed to place opposition on the defensive as being driven by an irrational fear, and thus silence opposition. Which tactic is actually just what the playbook of “After the Ball” advocated long ago.[1]Their strategy was based on the premise that,

"In any campaign to win over the public, Gays must be portrayed as victims in need of protection so that straights will be inclined by reflex to adopt the role of protector. The purpose of victim imagery is to make straight people feel very uncomfortable….our effect is achieved without reference to facts, logic, or proof.”

As clearly taught in the Bible, God made man and women distinctively different yet uniquely compatible and complementary, and only joined them together in marriage - as the Lord Jesus Himself specified (Mt. 19:4–6) - and only condemned homosexual relations wherever they are manifestly dealt with

et there is still room at the cross for all who will come to God in repentance and faith, and trust in the Divine Son of God sent by the Father, the risen Lord Jesus, to save them on His account, by His sinless shed blood, and thus be baptized and live for Him. (Acts 10:36-47) Thanks be to God.

If they were masters and had an advantage, everyone would be taken in by their mendacity.

Again, as I’ve always said, it’s about the adjectives they stick in.

Meanwhile, I’m sure they zero problem with the disgusting “NO LIVES MATTER UNTIL BLACK LIVES MATTER”.

I had a guy on my crew back in the 90s who was wearing a t-shirt with “ silly faghot,diks are for chicks”. Another guy,another day had a t-shirt that said “ Shut up Bitch”. I had to have company t-shirts made with my logo and it was mandatory apparel cause there were too many complaints.