Yet another shock video out of Australia shows police enforcing coronavirus rules by arresting an elderly woman sitting on a park bench for not wearing a mask.

“This is unlawful, on what grounds am I under arrest?” asks the woman.

An officer then walks around the back of the bench and snatches her friend’s phone away, preventing her from filming the encounter.

The woman is told that she is being arrested for failing to provide her name and address.

Once a person has been targeted for not wearing a mask or violating any other coronavirus rule, they are asked to provide a name and address so they can be fined.

If they refuse to do so, they are then arrested.

Another video we reported on shows a young woman being dragged to the ground and manhandled by a police officer for not wearing a mask.

Wait till Chinese-made vaccines are mandatory.

Citizens of the state of Victoria in Australia have been subjected to one of the most draconian COVID-19 lockdowns in the developed world.

Authorities have also given themselves the power to have police remove children from the custody of their parents in order to ensure compliance with coronavirus rules.

Police in Melbourne also announced that they would be using surveillance drones to catch people who don’t wear masks and to keep track of cars that travel further than 5km from home.

She should have told them I’m just catching my breath after killing three people and they probably would have left her alone.

2 posted on 09/09/2020 3:43:42 PM PDT by antidemoncrat (Biden's)
[ Post Reply | Private Reply | To 1 | View Replies]
To: george76
“Did you really think we want those laws observed?" said Dr. Ferris. "We want them to be broken. You'd better get it straight that it's not a bunch of boy scouts you're up against... We're after power and we mean it... There's no way to rule innocent men. The only power any government has is the power to crack down on criminals. Well, when there aren't enough criminals one makes them. One declares so many things to be a crime that it becomes impossible for men to live without breaking laws. Who wants a nation of law-abiding citizens? What's there in that for anyone? But just pass the kind of laws that can neither be observed nor enforced or objectively interpreted – and you create a nation of law-breakers – and then you cash in on guilt. Now that's the system, Mr. Reardon, that's the game, and once you understand it, you'll be much easier to deal with.” ― Ayn Rand, Atlas Shrugged
3 posted on 09/09/2020 3:50:48 PM PDT by E. Pluribus Unum (When exposing a crime is treated as committing a crime, you are being ruled by criminals. -E Snowden)
[ Post Reply | Private Reply | To 1 | View Replies]
To: george76
That's unbelievable, fascism takes over a formally free country in just a few months.

And Australians have nothing to fight back with.

And now the Australians are understanding why there guns were taken away.

“You’d better get it straight that it’s not a bunch of boy scouts you’re up against.”

Have you seen the disgusting lawyer commercials making big bucks off what’s left of the boy scouts ? 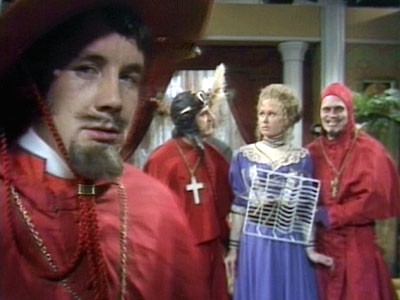 Note this is happening in Victoria. The current state government in Victoria is looney left labour.

8 posted on 09/09/2020 4:09:47 PM PDT by xp38
[ Post Reply | Private Reply | To 1 | View Replies]
To: E. Pluribus Unum
Perhaps one day they'll have another version of the Nuremberg Trials when these fascist leaders and their covid soldiers will have to answer for their crimes.

And, "I was just following orders" will not be a defense.

similar madness is happening all over Australia - with the Federal Govt being one of only three countries which doesn’t allow Australians to leave the country.

all Australian FakeNewsMSM is with the covid program - with the exception of a few brave individuals, some of whom originally went with the hysteria.

however, given a “celebrity” for their headlines, they are reporting the following hypocrisy today, though they could list dozens of bizarre exemptions for sports stars, etc, and, on the other hand, many refusals to grant exemptions on compassionate grounds for individuals across the border (where there have been no cases whatsoever) to receive medical treatment for emergency non-covid conditions or, for a Queenslander to return home to attend a father’s funeral, after not being granted exemption to visit him before he died:

Ms Palaszczuk confirmed Hanks was exempt from quarantine under the film industry’s COVID-safe plan.
“Under that plan they have to stay in the place for two weeks just like everybody else and they will have random checks, as my understanding, by the police,” she told parliament...

Ms Palaszczuk said the big budget film would bring more than $100 million and 900 jobs into the Gold Coast economy.
Hanks is not the first star to be exempt from the strict border rules.

In July, the decision by Queensland health to give Masked Singer Australia judge Dannii Minogue an exemption caused backlash on social media...
https://thenewdaily.com.au/entertainment/celebrity/2020/09/09/tom-hanks-exempt-qld-quarantine/

10 Sept: 9 News Australia: Queensland Health responds to anger after children stopped from visiting dying dad due to border restrictions
By Olivana Lathouris
The Queensland Government says it won’t budge on its strict border measures with NSW despite revelations a father-of-four dying in a Brisbane hospital was told only one of his children would be able to visit him a final time as a result of coronavirus restrictions...

Controversy over the situation has been bolstered after it was discovered actor Tom Hanks was allowed to cross the border to resume filming of an Elvis Presley biopic.
Hanks is currently in two weeks hotel quarantine along with his crew.
https://www.9news.com.au/national/queensland-health-statement-after-children-not-allowed-to-visit-dying-dad-nsw-qld-coronavirus-border-restrictions/

sadly, polls allege the harder the covid line taken by State Premiers, the more the public loves them! go figure.

Well I’m Australian but I escaped almost 60 years ago. :)

The fake news part is exactly the same in the US.

Adolf would be proud of these little Storm Troopers.

It has been about a 30 year process. The country started going bad during the 1980's, as the labor (city) party took over from the Country party in a big way. The country party was led by pretty Conservative large landowners, pretty much. They were mostly live and let live.

But the big city operatives have always been pretty active "tell you what to do" kind of politicians.

Once they got liberal immigration going strong, the cities population grew very fast. The country people just do not have enough votes.

As I said before the left went from zero to fascist in 60 seconds.

Incredibly creepy and scary - I can somewhat understand why this is being pushed here in the US, because of the upcoming election and everything that entails ... but Australia? It seems like such a tough, free, live & let live country, and this is happening there too? Yikes!

Good thing people in Oz have been disarmed.

It was incredibly eerie watching the Aussie police forcibly arrest a citizen for the 'crime' of not wearing a worthless face covering.

Everyone needs to cross Australia off their vacation list for 10 years.

And how many police resigned in protest or refused the orders?