Saturday, May 23, 2020 President Trump had a phone call with Erdogan (I confirmed  the call per an article in Bloomberg). On June 13, some on Twitter were excited about claims being made about that call. 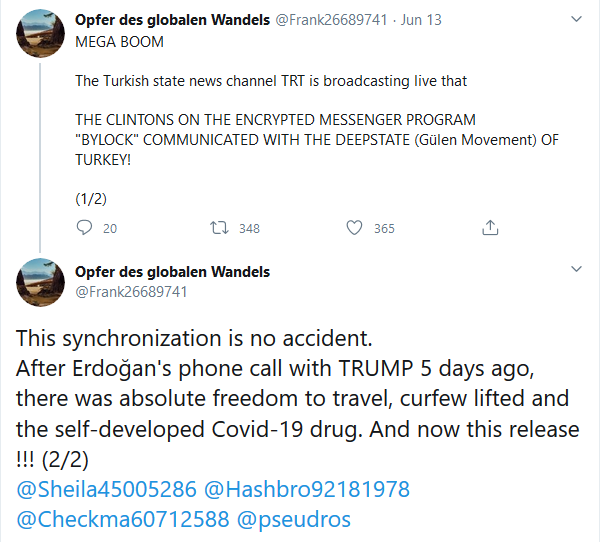 Tweeter FiestyQgrl @FQgrl  provided this Google translation of the Turkish news broadcast message "Met for the first time with Hillary Clinton (former US foreign minister and presidential candidate). He looks and loves us positively. If selected, the services here will be more comfortable. republicans are seriously against us."

Another Twitter account, Scrappy-Doo aka Harpazo-girl#̷̧̢̼̤͈̼̫̋̾Q̸̼͔͕̗͚̟̉̄̄ @Scrappy94546226, offers the following link to a 2017 Op Ed written by General Flynn as "the back story"

"The primary bone of contention between the U.S. and Turkey is Fethullah Gülen, a shady Islamic mullah residing in Pennsylvania whom former President Clinton once called his “friend” in a well circulated video."

~Flynn likened Gülen to Muslim Brotherhood leaders and "Turkey's Osama Bin Laden", and pointed to a video of President Clinton claiming Gülen is a friend of his.

~Gülen was living in exile in the US where US tax dollars helped finance 160 charter schools he opened. Yeah, he's an "educator"/terrorist leader. His schools were granted more H1-B visas than Google, but their English "teachers" couldn't speak English.

~Neonrevolt noted a NYT article that discusses the terrorist organization in the US led by Gulen. This is what was going on:

The English “teachers” who can't speak English get paid by taxpayers.

The same “teachers” then donate 40% of their paychecks BACK to the Gulen Movement.

According to Buzzfeed [July 23, 2014], Texas Reps. Sheila Jackson-Lee, and Henry Cuellar, both Democrats, are among the biggest benefactors of Gulen contributions.

Hillary Clinton's campaign received the most money of any presidential candidate from Gulenist donations.

So it looks like Hillary, among her countless other crimes, was probably receiving foreign campaign donations (access pedaling) through an intermediary donor, Cosmos Foundation, serving Turkey's equivalent to "Osama Bin Laden" and she was promising to "improve services" in  Turkey if she won.

I assume she naturally did this because everything she new about winning elections, she learned from Bill Clinton.

The left is against charter schools, unless they are owned by terrorists and used to get HB-1 visas for "English teachers" who don't speak English. They also don't trust elections, unless they are successful in buying/bribing to win them.

To sum it up, Turkish television is outing the detals of Hillary's arrangement with Guelinists through an encrypted messaging service. Erdogan lifted Turkish Covid-19 lockdown and has treatment medications 5 days after his May 23, 2020 conversation with President Trump.

Since this is all bad news for Democrats, I assume Nancy Pelosi is opening a few more impeachment investigations to supplement the fresh ones they are creating based on John Bolton's new book.

Glad the word is getting out from “independent” overseas sources.

This comes on top of “independent” reports of bribery & obstruction of justice in the ukraine.

Glad the word is getting out from “independent” overseas sources.

This comes on top of “independent” reports of bribery & obstruction of justice in the ukraine.

It looks like she ‘pulled a Biden’ and pressured someone in the US to make their relative halt an investigation into her dealings in bank in Bangladesh:

They testified the amount of unpaid taxes was approximately $2.5 Billion dollars. (That was if the money brought in was legit, which they testified it was not).

Senate investigators: It’s time that we see all Hillary’s secret communications. What does the NSA have on this BYLOCK system?

George Webb was on this 3 years ago. I know he went off the rails recently, but his older stuff was on it.

Thanx for the link.

Of course that was small taters prepping her for the big time bucks in influence peddling: gummit grants, arms dealing, drugs

That's the last straw. He's pissed off Hillary. Erdogan's as good as dead.