Russia Became a Communist Hellhole Because of This Man
The Daily Signal ^ | November 6, 2019 | Richard Lim

To understand communism, it’s important to look at the man who was the first to institute a government dedicated to Karl Marx’s ideals: Vladimir Lenin.

When I was in college, I recall a conversation with several classmates who joked about throwing a get-together and naming it “The Communist Party.” They mocked the idea that anyone would fear this supposedly well-meaning ideology.

I wonder if they would have been laughing if they were in the presence of gulag survivors.

This Nov. 7 marks the 102nd anniversary of Lenin’s rise to power in Russia, and Nov. 9 will mark the 30th anniversary of the fall of the Berlin Wall, the symbol of tyranny built by the regime he forged.

Victor Sebestyen’s 2017 biography on Lenin—the first major biography of the Soviet leader to hit Western bookshelves in two decades—documents his many crimes against humanity.

Lenin’s streak of cruelty began long before he came to power. By his early 20s, his zealous dedication to Marxism led him to believe that anything justified revolution.

Cruelty Without a Conscience

When a famine broke out in the Volga region in 1891—one that would kill 400,000 people—Lenin welcomed the event, hoping that it would topple the Czarist regime. His sisters, dedicated revolutionaries themselves, assisted with relief efforts for the starving and were shocked by his callous refusal to help.

Later, in 1905, when Czarist forces killed hundreds of striking workers and 86 children in Moscow, Lenin refused to mourn for the dead and, instead, hoped the event would further enflame class antagonisms. In his eyes, human lives were expendable in the pursuit of the workers’ paradise.

Nope, not saying anything in particular. But food for thought...

Here's a statue of the great man in Seattle's Pioneer Square.

We’re getting close to such beliefs today. The notion that ideology is more important than morality is the source of the rot.

Someone should paint the base of that and the surrounding plaza to look like a giant puddle of blood. So we’re tearing down statures of Robert E. Lee and William McKinley and putting up statures of Lenin. It’s amazing how our culture has changed over just the past few years.

11 posted on 11/07/2019 5:22:29 AM PST by Fiji Hill
[ Post Reply | Private Reply | To 4 | View Replies]
To: Fiji Hill
"So we’re tearing down statures of Robert E. Lee and William McKinley and putting up statures of Lenin. It’s amazing how our culture has changed over just the past few years.

Blame the pinheads who populate our 'academic' institutions. I never heard ANYONE extol the virtues of Marxism/Communism in the US until I met some arrogant know-it-all idiots at the U of Chicago. It makes me sick.

And to think, it was the Russians themselves who tore down the monuments to communists, broke them up, melted them, or otherwise threw them into a landfill; as Reagan rightly said, onto the ash heap of history.

But rich, fat, lazy American academic Socialists, dressed in tweed jackets, with elbow patches and smoking a pipe, or wearing a gypsy skirt, with flowing scarves and crystal and turquoise necklaces, decided it would be just grand to save this monument to a monster and put it HERE, in this country, on display. 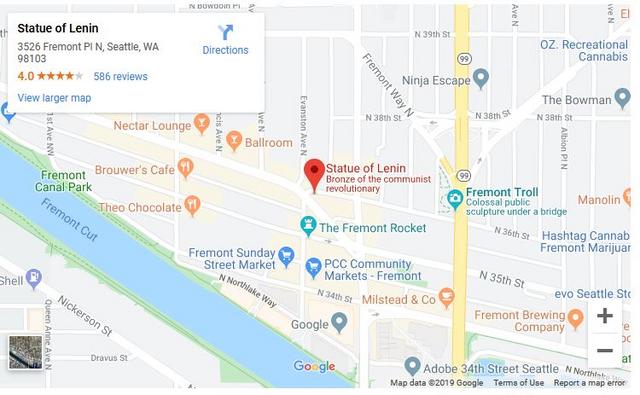 I guess it fits, there.

Blame the pinheads who populate our ‘academic’ institutions. I never heard ANYONE extol the virtues of Marxism/Communism in the US until I met some arrogant know-it-all idiots at the U of Chicago. It makes me sick.

Interesting. Today Chicago is perhaps unique as an ‘elite’ university that makes no bones of not being into to ‘safe spaces’ and First Amendment restrictions.

The German movie “Goodbye, Lenin” is worth watching. It revolves around the fall of Communism in East Germany.

One of the greatest films ever.

18 posted on 11/07/2019 5:55:48 AM PST by NorseViking
[ Post Reply | Private Reply | To 16 | View Replies]
To: Texas Eagle; dp0622; piasa
Not Pioneer Square, It's in the Fremont District of Seattle. It was snatched up and brought over as a relic when statues of Communist figures were being pulled down all over Europe in 1989 - 1992. Was it a good idea? Nah, plenty of people have complained and criticized but the going consensus is "IT's Fremont" where the weird is normal.

It was brought as a 'cool' curio. The Fremont neighborhood is not communist, it has lots of leftover hippies and characters that like to accent certain corners and niches with curious landmark features. Here's a few other accents:

Clown statues - "Late for the Interurban" 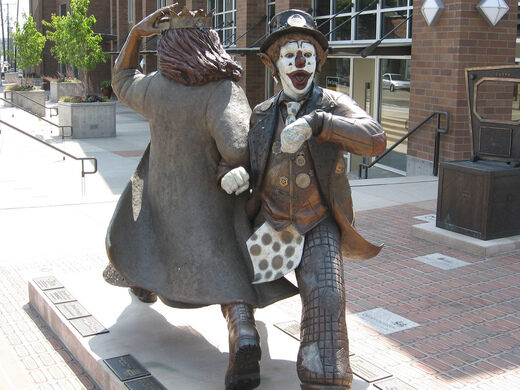 And of course the 18-foot tall "Fremont Troll" under the 99 Bridge. The Volkswagen Beetle has since been removed ostensibly for safety/liability reasons. 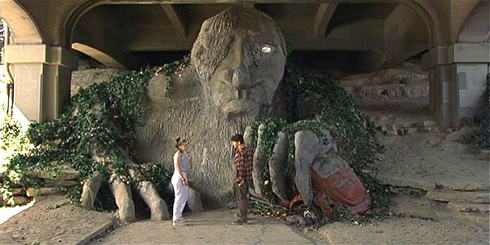 Fremont denizens like to dress The Troll up for special occasions. 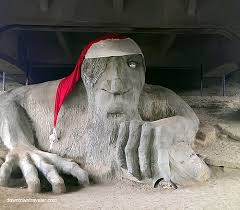 Most of the Hippies in Fremont are networked in with artists and musicians, or businesses that are offshoots of them or their family members. Dave Matthews is one example.

There are some communists in Seattle but not many, then every city has a cult of communists. The socialists on the City Council are hated and will fade away probably soon. The King County Elections and the Seattle municipal elections office have been corrupt for decades but the City has always been ruled ultimately by practically-minded business owners, especially long term landmark businesses. Presently, there is a building boom downtown from the presence of Amazon and the need for housing. But there is also the San Fran phenomenon of human feces and syringes on the street along with criminals released hours after they are arrested.

I see a resurgence of Seattle businesses which are in a state of both decline and ascendancy. There will likely first be more decay to city businesses. But always when businesses fail, eventually things get serious and practical to a point that the socialist idiots are booted.

But the Hippies in Fremont will always have their niche in the City's culture.

The culture in Fremont is one of fun and out-of-the ordinary. Between stop-in breweries (Hale's Ales), great Greek restaurants, and a slew of curio shops, open rock & roll dive bars for groups just starting out, tea cafes and dress shops, the Lenin stature is pretty much ignored and not even in the very center of where the action is. It's off to the side.

That said, I think it would be appropriate for a side memorial plaque reminding passersby of the tens of millions of innocent people that died or were murdered under Lenin's tyranny. And someone could paint the statue's hands blood red. But then the statue wouldn't be a curious object. it would become a serious object and would likely be removed as 'serious' in not in Fremont's off-the-wall culture.

A large bronze metal plaque perhaps embedded in the concrete sidewalk in front of the Lenin statue attesting to the horrors of the man would fit with the district's zeitgeist.

While I am all too happy to pile on a human stain like Vladimir Lenin, he isn’t the cause Russia became a hell-hole. The cause is Communism and Socialism, Lenin just happened to be the vehicle.