Snow is starting to disappear from our lives. Sledges, snowmen, snowballs and the excitement of waking to find that the stuff has settled outside are all a rapidly diminishing part of Britain's culture, as warmer winters – which scientists are attributing to global climate change – produce not only fewer white Christmases, but fewer white Januaries and Februaries … Global warming, the heating of the atmosphere by increased amounts of industrial gases, is now accepted as a reality by the international community … According to Dr David Viner, a senior research scientist at the climatic research unit of the University of East Anglia, within a few years winter snowfall will become "a very rare and exciting event". "Children just aren't going to know what snow is," he said.

Today children are not going to know what Freedom is

In a few years the country will be buried in snow. Mini ice age coming. Will need to crank up the CO2 emissions.

If I feel the need to see snow I jump in the car and take about a 45 minute drive. Done!

44 posted on 10/31/2019 3:22:48 PM PDT by Agatsu77
[ Post Reply | Private Reply | To 1 | View Replies]
To: kaehurowing
Within the last few years I remember British papers moaning that the winders were going to be colder than they had been for a hundred years. What happened?

When this article was written in 2000, they had not yet adapted their "models" to show that ANY weather, warmer, cooler or neither, was to be presented as proof of "anthropogenic climate change". Failure of their predictions to come true is proof positive that they are correct!

Had to brush an inch of something white and cold off the truck the begining of the week. I’m hardly in snow country, but in high desert in the NM quarter of the 4-corners. Pretty sure it was snow, didn’t taste it.

They will have so little experience with liberty that they won’t know that they don’t have it.

When was the last time London had a white christmas?

That’s why everyone south of the border is trying to get here.

can’t he just grab a quick dose of grow the F’ up?

We got three inches today.

... said the Daily Telegraph at the beginning of the new Ice Age.

Most snow in CA in decades last year and already starting this year.

That would be the one who was caught with Professor Mann from Penn State who invented the hockey stick with doctored data.

Yep, no doubt about it — the kids will never know winter again.

“Do you suppose we can learn enough, soon enough, to pull off a balancing act with the CO2 blanket saving us from another ice age?” 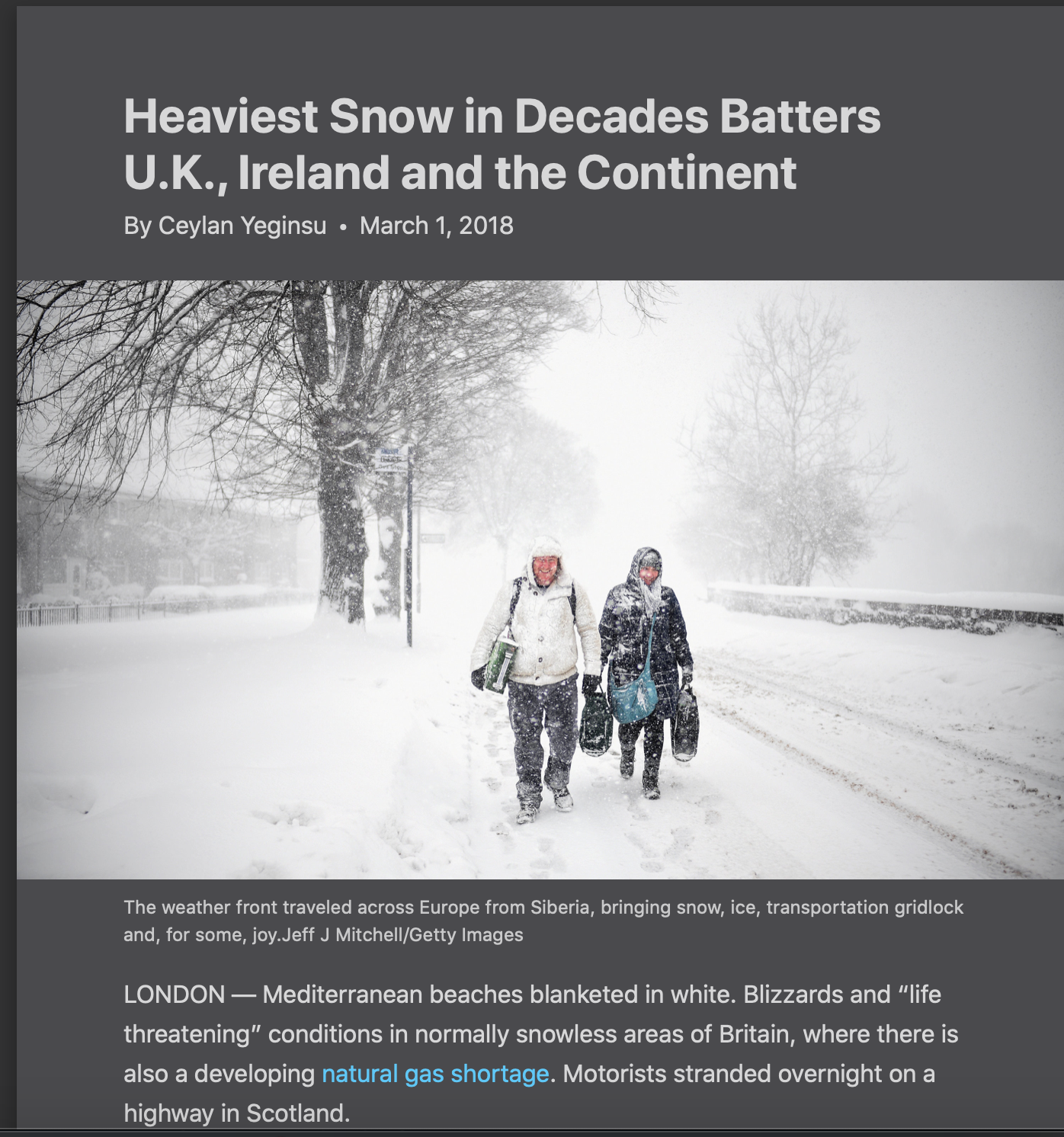 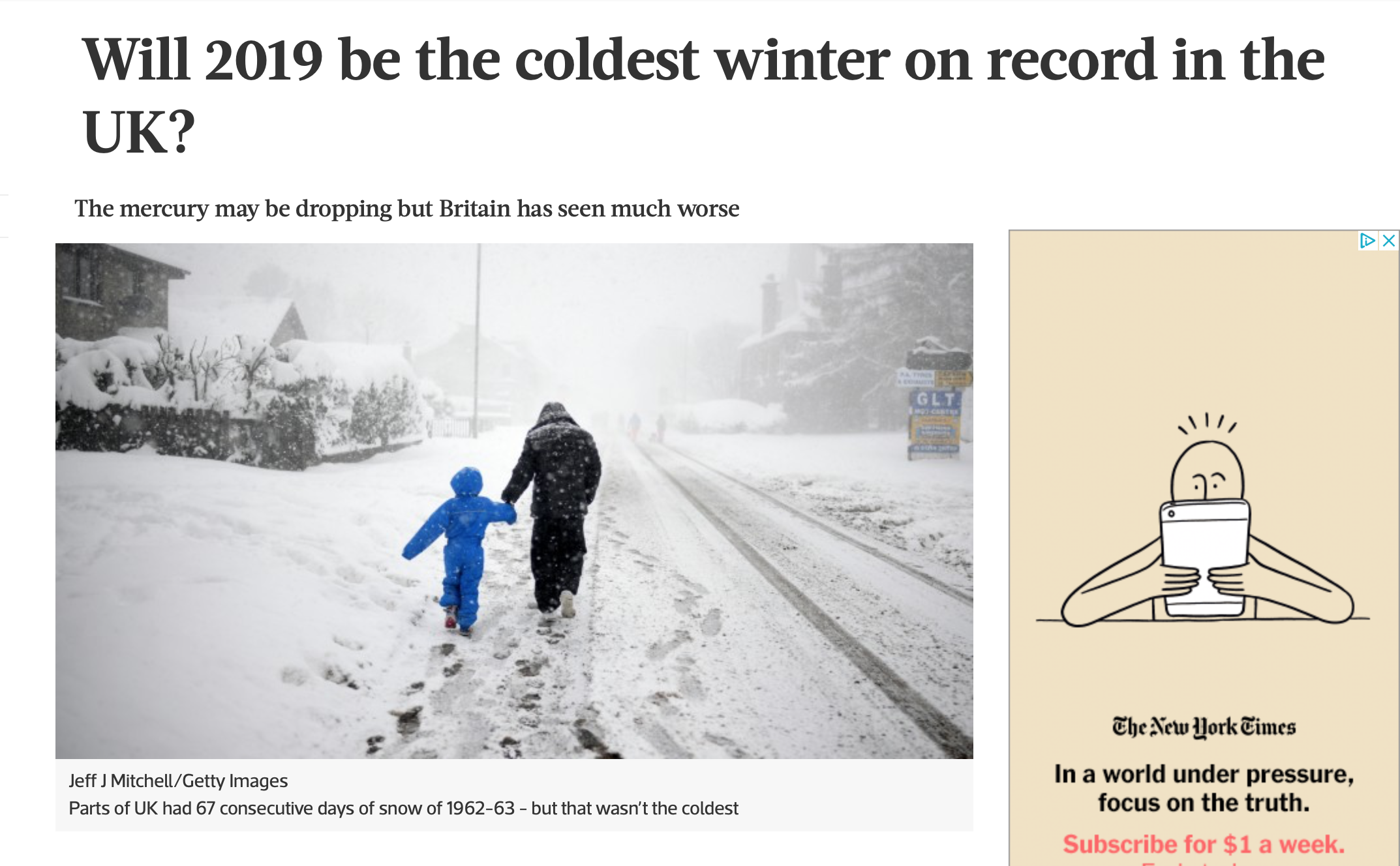 At least that is the feeble excuse the global warming promoters will tell you.

One doesn't drive "out" to Flagstaff to see the snow. You drive "up" to Flagstaff. Just giving you a clue so you'll sound like a native. :-)

Flagstaff has the closet ski area to Phoenix at the Snow Bowl.

Hawley Lake, northeast of Phoenix, is noted as the coldest spot in the nation on the national weather programs sometimes. It holds the all-time record low temperature in Arizona history with -40 degrees recorded in January 1971.

Enjoy dry Arizona. I miss it. We live in humid Florida now. I hate the humidity. And bugs that go with it.

4. There is always “snow” in Chicago. It’s called cocaine.