Casey Anthony To Release Movie About Life After Caylee: 'Yes, I Partied Like Nothing Happened'
Newsweek ^ | June 3, 2019 | Kelly Wynne

Casey Anthony, who was once accused of murdering her toddler, is working on a film that depicts her life after Caylee's death. Anthony, who was notorious for publicly partying instead of mourning, explained those wild moments will be featured, in addition to her murder trial, where she was ultimately acquitted.

Is Jerry Springer going to be in it?

So now you’re opposed to fifteenth-trimester abortions? How un-American (according to Gov. Cuomo).

In other news, Susan Smith is eligible for parole in 5 years.

Another one who should have been hanged.

EEEEwwwwwww, so they're trying to make dead children cool? (SICK!)

Crime and no Punishment coming out just in time for Christmas

She could have just called it a late late late term abortion, the left would have thrown her a party

With her attitude it wonders me she doesn’t say yeah I killed the little brat. She would be free and clear because she got off in the trial and can’t be recharged.

So few prosecutors ever really go after the mothers. 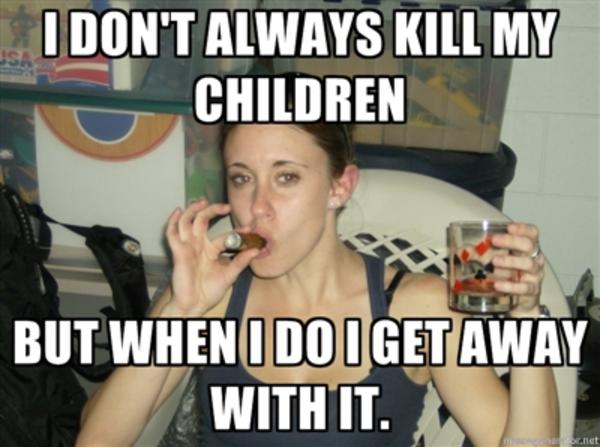 “Casey Anthony... is working on a film.”

The judge said, “Casey Anthony probably accidentally killed her.” Yeah, right. The mommy accidentally had too much poison around her daughter. The best thing to do is for everyone involved to feel regret.

“With her attitude it wonders me she doesn’t say yeah I killed the little brat. She would be free and clear because she got off in the trial and can’t be recharged.”

I’m surprised too, as she supports BJ’s wife.

Macabre. Surely nobody will go to this film? Surely?

Yes they will, and don’t call me Shirley.