My wife was going through her late aunt's things and found a military pin for the 128th Overseas Batallion from Moose Jaw, Canada. Do any FReepers know the history of this unit? My wife's aunt was in the Home guard in WWII but it could have been her father's or a friend's from WWI. The 128th Battalion, CEF was a unit in the Canadian Expeditionary Force during the First World War. Based in Moose Jaw, Saskatchewan, the unit began recruiting in late 1915 in that city and the surrounding district. After sailing to England in August 1916, the battalion was absorbed into the 15th and 19th Reserve Battalions on August 24, 1916. The 128th Battalion, CEF had one Officer Commanding: Lieut-Col. F. Pawlett.

3 posted on 06/01/2019 6:40:57 AM PDT by rigelkentaurus
[ Post Reply | Private Reply | To 1 | View Replies]
To: Oshkalaboomboom
The Saskatchewan Dragoons has an emblem that's has the crown and three sections: 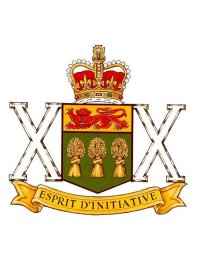 Perhaps a drinking club?... sorry, just joshing, no disrespect to the service.

A moose bit my sister,,,
.
Sorry,
I couldn’t help myself.

My wife’s Grandfather was in the British army in WWI. He must have traded pins with a Canadian soldier. That’s the only way I could see it ending up with my wife’s Aunt.

My father served in WWII in north Africa and Italy. He had a variety of patches which he traded for. Seems to be a common thing to do. Kind of like collecting baseball cards for the guys serving in such a large, widespread war.

“A moose bit my sister”

Your sister may have experienced the least of it.

Years ago, a friend’s sister moved to some outback area of Alaska in search of whatever she couldn’t find here.

After a time she met the love of her life and a wedding date was set. One night before the wedding, they were out dancing when he dropped dead on the dance floor.

Shortly after, she was severely injured when run over by a moose crossing the road.

Why did the Moose
Cross the Road?

I like that story as it confirms my dislikes of dancing and Mooselems.