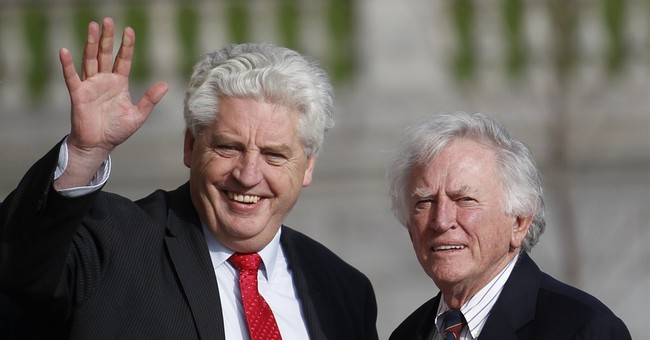 Hollywood's a bit inconsistent when the topic is the press. It was a righteous guardian of the truth against the Catholic Church in "Spotlight" and against Richard Nixon in "The Post." But now, in the new movie "The Front Runner," it is painted as the villain -- when its target was Gary Hart.

He was expected to be the Democratic nominee in 1988 before those photos surfaced of him on the yacht Monkey Business with Donna Rice sitting on his lap. They surfaced after he challenged reporters to tail him and see he wasn't cheating on his wife. No matter. They still shouldn't have blown the whistle on him.

The New York Times movie review explained that the film's director, Jason Reitman, "depicts his hero as a man struggling to protect his privacy and that of his family against the predatory prurience of the news media."

Was it "predatory prurience" when The Times and others pursued President Trump's accusers? Or is that just for accusers of Democrats?

The journalist villains in the movie are based on real people who caused Hart's 1987 collapse, like Miami Herald reporter Tom Fiedler. But one is a fictional, composite Washington Post reporter, instead of the "true" villain of legend, Post reporter Paul Taylor, who was roundly condemned for asking Hart, "Have you ever committed adultery?"

In Taylor's 1990 book "See How They Run," he quoted an anonymous "pen pal" who perfectly captured the Hollywood left's mindset: "To have destroyed Richard Nixon, I applauded you. ... For what you did to Gary Hart, I damn you all to hell."

The movie is based on a 2014 book by left-wing former New York Times Magazine political writer Matt Bai titled "All the Truth Is Out: The Week Politics Went Tabloid." The Boston Globe book review summarized the theme: "Bai says what is obvious -- that the Donna Rice furor irreparably hurt Hart -- but he also says what is less obvious, and very wise: that it hurt us all."

America was deprived of Hart, the brainy visionary, and was left instead with George H.W. Bush.

But there's an enormous historical flaw in this logic. If caring about adultery was going to limit the talent pool in presidential politics, how do you explain these same media outlets straining to avoid causing any harm to Bill Clinton in 1992, lecturing the American people (as Time magazine did) to "grow up about sex"? Clinton was much more shameless than Hart.

To accompany this movie, the CBS program "Sunday Morning" interviewed Gary Hart, now 82 years old. Rita Braver polished the apple fiercely. Hart became the front-runner "because of his visionary ideas." Hart claimed, "I saw as early as anyone else the shift of the economic base of America from manufacturing to information and technology."

Braver added: "You were actually worried that we were heading toward a war in the Persian Gulf and that nobody was trying to diffuse the situation, especially vis-a-vis terrorism ... Hart was considered brilliant but also a bit aloof."

Hart lectured that forcing him out of the race in 1987 meant we would "get the kind of leaders we deserve," adding, "You can't have rules that were applied to me, applied to American politics, and get people of quality." Braver didn't ask if he thinks Clinton and former President Barack Obama were "people of quality."

One more thing: Who the hell cares about Gary Hart at this point anyway? Answer: some old leftists in Hollywood who didn't get Camelot 2.0, and CBS, which just doesn't get it, period.

“Because he's the hero Gotham deserves, but not the one it needs right now.” – Commissioner Jim Gordon

Gary Hart was George McGovern’s campaign manager in 1972. I saw him and his boss a lot during the campaign.
I can tell you that Bill Clinton and Teddy Kennedy were wallflowers compared to Gary Hart. He managed “his campaign” much better than he did for McGovern.
He looked like he was on Meth and Viagara 24/7.

4 posted on 11/30/2018 6:22:33 AM PST by namvolunteer (Obama says the US is subservient to the UN and the Constitution does not apply. That is treason.9we)
[ Post Reply | Private Reply | To 1 | View Replies]
To: Kaslin
George Bush was lucky to have run against Mike Dukakis.

I think Gary Hart would have beat him.

Gary Hartpence, just another useless Watergate baby moonbat Demonrat Senator who contributed nothing to making America better. Had the CO GOP not put up a milquetoast RINO woman against him in 1980, he’d have been swept out after a single term in the Reagan landslide.

At least Gary Hart had much better taste in paramours than Bill Clinton did.

It was after they helped to implode the Gary Hartpence campaign that the media stopped investigating Democrat presidential candidates altogether. Bubba and The One would of never made it if the media had really scrutinized them.

Would we have gone to war against Iraq if Gary Hart beat GW Bush?

The original invasion of Iraq, triggered by the CIA, was the worst mistake in American history.

Michael Dukakis might as well throw his hat back in the ring too. The Democrat presidential race will be a circus for sure!

Donna Rice may not be someone that the Left wants to profile these days. She doesn’t stand with them politicially and is active.

Jimmy Carter is biting his lip not to announce.

...caring about adultery was going to limit the talent pool in presidential politics...

The left is hypocritical and communist and will tell whatever story they need at the moment to promote their current cause de celebre.

for instance - look at all the stories of the evil of McCarthyism and the red menace which were considered witch hunts to today’s events where the left not only promotes McCarthyist tactics but demands it at all costs.

One could even suggest that we got Clinton precisely because of the guilt the press felt about Hart. (We were too hard on him so we’re going easy on this guy)

Speaking of Jimbo Carter I know Walter Mondull is still around. He should get in to and how about Jon Edwards and Lurch too!

“You can kick in the tush a Gephardt or Bush,
“And the polls say you’re good for one last big push,
“But here is the best part, you’ll have a head start,
“If you are the one and only Gary Hart......

Would we have had a 30 year bipartisan policy of non-enforcement of laws and borders designed to flood the country with fraudulently documented foreigners to steal the country from the citizens?

Nothing good came from the Bush family.