Legislation to add a “Gender X” option to driver’s license should have been a straightforward task in the far-left state of Massachusetts, but one Republican lawmaker managed to derail the bill by taking transgender ideology to its furthest extreme.

The state Senate voted in June to approve the measure, which would have also extended the option to learner’s permits and state identification cards. No documentation would have been required to prove an applicant is neither male nor female.

Despite the state House of Representatives being just as heavily Democratic as the Senate, however, it never got the chance to send the bill to liberal Republican Gov. Charlie Baker’s desk.

In a column for the Boston Globe, New England radio host Howie Carr details how Republican Rep. Jim Lyons adopted a unique strategy for defeating the bill: forcing it to live up to its supporters’ own logic.

“Since all Democrats must admit that the number of genders is endless, how dare the commonwealth lump all the new genders together as ‘Gender X’?” Carr writes, summarizing Lyons’ facetious reasoning. “Every gender, he declared, must be listed on Massachusetts driver’s licenses! That was Lyons’ non-negotiable demand. No justice, no peace.”

Lyons told Carr he settled on demanding recognition for 73 different “genders,” as that was the number he reached by tallying the number of custom gender options Facebook offers.

Knowing that his liberal colleagues couldn’t rule any of the genders out of order without undermining the logic of transgender ideology, Lyons introduced each as a separate amendment to the bill the evening of July 31, each requiring 10 minutes of debate and three minutes to vote on.

Six hours in, Lyons had only filed 35 of the amendments, at which point House leadership realized he was running out the clock and there wasn’t enough time before the midnight deadline to pass both the bill and the other legislation on the docket. At 10:45 p.m., they withdrew the bill.

“By now, the few remaining sane Democrats in the Legislature realized that Lyons had done them a solid, sparing them from being recorded on a roll call vote on whether to recognize the genders of pangender, polygender and cisgender,” Carr wrote, “not to mention intersex, intersex man, intersex woman and intersex person.”

“One way or another, progressivism is always a death sentence. So we may as well turn it around and use it on its perpetrators whenever we get the chance,” Conservative Review’s Steve Deace said of the incident. “That doesn’t mean becoming like them, but understanding their con and endlessly harassing them with its real-world applications.”

Deace added, “We need legions more like” Lyons, following his example to make progressives “face the full foolish force of the filth they shove down our throats with barely any resistance (if not a subsidy). Lyons called their bluff, and they called it a day.”

Legislative deadlines recently thwarted another pro-LGBT bill in the Bay State, as well. The Senate failed to reconcile different versions of a bill banning reparative or “conversion” therapy for minors before the August 1 deadline, thanks to a controversial amendment that would have required teachers and doctors to report hearing about such treatments to social services.

We need this Lyons guy to be brought up to DC. He’s got potential.

Awesome! Make them live up to their own crazy demands.

WOW!
Truly, the good Lord works in ways that are strange to mankind

and he’s only one Republican politician with balls in a blue state. Balls and smart.

Rules for Radicals #4: “Make the enemy live up to its own book of rules.”

He gave them a shove when they just wanted a nudge.

On the original “Saturday Night Live” this would have made a great skit. But they’re to politically correct to be funny now.

“Ridicule is man’s most potent weapon”

A few years back, when a Republican governor lowered the state tax rate, the Democrats howled about how the women and children would be harmed as a result.

So on the state tax form the next year, there was a checkbox to pay the higher tax rate so that the liberals could put their money where their mouths were.

The Democrats shut up about the lowered tax rate after that.

Many times, when the PC crap is shoved back in their faces or they are confronted, they back down.

The Right just has to keep it up and never give an inch.

He's on the right. 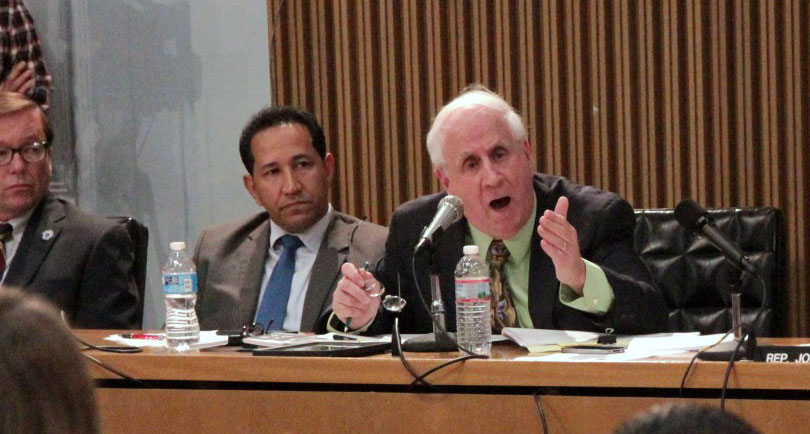 But while winning the skirmish is great, we gotta keep our eye on the long game. There will come more battles of this sort.

16 posted on 08/17/2018 9:34:01 PM PDT by Sam_Damon
[ Post Reply | Private Reply | To 1 | View Replies]
To: ealgeone
"Six hours in, Lyons had only filed 35 of the amendments, at which point House leadership realized he was running out the clock and there wasn’t enough time before the midnight deadline to pass both the bill and the other legislation on the docket. At 10:45 p.m., they withdrew the bill."

He has a “clubhouse” - a converted barn next to his home, where he hosts various events. Early in the election cycle, he hosted Ted Cruz.

Strangely, he came out in support of Baker (D. MA) for gov, where his ideology would be more in line with Lively (R. MA).

Sometimes all it takes is one man with balls and the will to use them.

Apologies to the ladies in the forum.