They were the leaders of the free world, but presidents George W. Bush and Barack Obama didn’t let that responsibility get in the way of a little fun.(snip)

While Bush made a practice of making fun of himself, the Obamas were known to good-naturedly tease their employees. For Bernard’s first day at the White House, he wore an orange Hermès tie that he second-guessed all morning as staffer after staffer commented on it. Then, he arrived in Michelle Obama’s office to greet his new boss. “Oh, my . . . your tie!” she exclaimed before bursting into laughter and going in for a hug. As the first lady admitted, she’d been tipped off that the tie had become a spirited point of discussion between Bernard and his new colleagues.

Bernard was not only the first male social secretary — he was the first openly gay one, too. He joined the Obama administration in 2011 and two years later, after the president was reelected, Bernard felt a hand on his shoulder at the post-inaugural ball. “I don’t want to be rude,” Obama said, “but I gotta say . . . for a gay man you really are a bad dancer.”

Misleading title, more like how they used humor as part of people interaction.

“and for all you C students, you too can be president of the United States.” I believe President Bush would be a charming dinner guest, politics aside.

Obama was a joke.

5 posted on 01/06/2018 5:22:22 PM PST by mountn man (The Pleasure You Get From Life, Is Equal To The Attitude You Put Into It)
[ Post Reply | Private Reply | To 1 | View Replies]
To: simpson96
While Valerie was running the government, Obummer was practicing his cartooning: 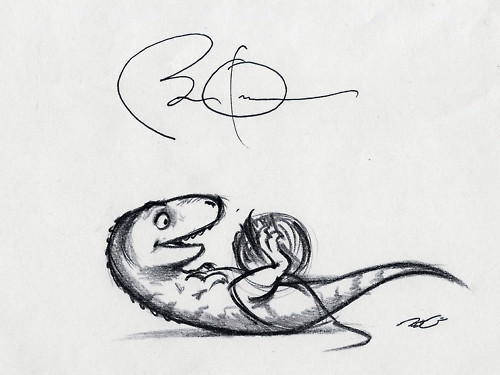 Typical- George W. Bush, for all his faults, was self-deprecating. B. Hussein, being the egotist, could NEVER laugh at himself and always mocked others.

I love that signature, where he turns his “O” into a Butt-Crack.

Obama’s best joke: “If you like your doctor, you can keep your doctor!” /laugh track

Runners-up: “I love America.” “Michelle is female.” “I am eligible to be president!”

That’s a joke in and of itself; he would never say he loved America!

I can’t think of any joke from GWB or his successor that would interest me.

I wonder who was leading?

I do too. And his wife too.

I have a list in my mind who I'd like a cup of coffee with and both are on it.