Russian PM not joking – extraterrestrials live among us according to MIB documentary
exopolitics.org ^ | January 2, 2013. | Dr Michael Salla on

Prime Minister Dmitry Medvedev’s off-air comments that Russian Presidents are given a secret file about extraterrestrials living among us created much media interest. Most news reports claimed that Medvedev was simply joking. His apparent reference to the Men In Black movie as a source of information on a super secret agency that monitors extraterrestrials on Earth was commonly cited as key evidence that he was in fact joking. The reasoning is that no political leader would refer reporters to a comedy to clarify national policy. It has now emerged that Medvedev was not referring to the Men in Black comedy after all, but to a recent Russian television documentary titled “Men in Black” that reveals many details about an extensive cover up of extraterrestrial life visiting Earth.

Russian Men In Black (MIB) documentary, a number of prominent UFO cases in Russia and the USA are discussed. The Roswell UFO crash is covered, along with a number of extraterrestrial abduction cases, and UFOs disabling nuclear weapons facilities. The documentary examines testimony that extraterrestrial bases have been established on Earth, and that some are in restricted US military areas with the full knowledge of the Pentagon. The documentary even goes on to seriously discuss President Eisenhower’s alleged meeting with extraterrestrials, where agreements were reached with some of the visitors giving them permission to take some of the Earth’s resources in exchange for advanced technology...

It’s one of the three

Well I don’t know about “live amongst us”...that sounds a tad far-fetched...but the “Belgian Wave” sightings are very interesting to read about and very difficult to dismiss out of hand.

He is a frickin Spaceman.

There’s a colony of them occupying the White House.

As a born and bred Earthling, that would make me feel a lot better if true.

Jarret is a Reptillian. Just look at her.

I'm pretty sure they are Arab terrorists.

What I had read was that during the Ike admin, a 50 year contract was agreed upon between USA and the aliens.

In exchange for the aliens providing certain electronic and military technical info, they were allowed to do biometric testing, genetic engineering, and actual abductions.

I’ve also heard a couple times people who claim to be ex-mil black box type workers say that whatever you think we might have as far as military tech, add 100 years to that level, and that’s where we are!

No doubt. No one has ever seen her forked tongue either.

Well, they must have one giant version of a “Prime Directive”, otherwise they would have DONE something to help out, or at least get these political gangsters sidetracked onto a good gang of “Fizbin”.

Darn you Dmitry, now everyone knows about us and we may have to move again.

To: haffast
Now we know that the tin foil kooks have came out of the cage... 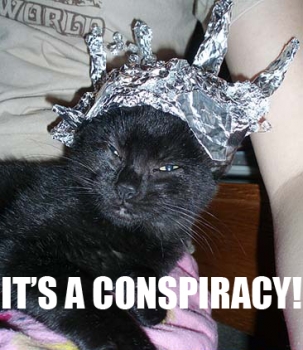 Soooooo, is the contact expired, or was it renewed?