From London... The British government and its military advisers tentatively accept the American “Bolero” plan detailing the American build-up in Britain in preparation for the second front.

UNITED KINGDOM: Operation Bolero is provisionally accepted by the British as a basis for the American build-up in Britain.

London: Purchase tax is to be doubled to 66% on nearly all non-essential goods. Beer is up 2d a pint. A bottle of whisky will cost 22/6 instead of 17/10, and cigarettes go up from 1/6 to 2/- for a pack of 20. These hefty increases in indirect taxation were announced in today’s “sacrifices for victory” budget, which keeps the standard rate of income tax at 10/- in the pound (50%). The government denied that tobacco supplies to shops are to be cut.

FRANCE: Laval forms a new government in Vichy, with Marshal Petain as Head of State.

MEDITERRANEAN SEA: U class submarine Upholder is not heard from after meeting HMS Upholder to transfer an army officer. There was a report of a submarine sighting close to a minefield off Tripoli on 11 April, and on 14 April, Italian destroyer Pegaso carried out a depth charge on a suspected submarine which produced no debris, however, this would have been about 100 miles away from where Upholder was expected to be. There is no certainty about the fate of Upholder (commanded by Lt.Cdr. Wanklyn VC DSO RN) and her file remains open. (Alex Gordon)(108)

The recent blitz of Malta having greatly reduced the islands strike capability, the convoy was bolding steaming on a direct course, passing within 100 miles of the island.

For some time, the Coastal Command’s Mediterranean command, 201 Group, had been building up a small force of Beauforts for 39 Squadron. Combining with elements of 22 Squadron, on a delayed passage to Ceylon, a striking force of 10 serviceable Beauforts (three from 22 Squadron, seven from 39 Squadron) as well as four Beaufighters of 272 Squadron is forwarded to the airfield at Bu Amud. As the aircraft do not have the range to strike the convoy and return to their North African base, the plan calls for them to fly on to Malta after the attack, and hope that they can fight their a through to the islands airfields through the ever present patrols of German fighters.

Though the convoy is contacted by two Maryland reconnaissance aircraft of 203 Squadron, also operating from Bu Amud, one of 22 Squadron’s ASV Beauforts is dispatched 0730 as a contact plane. The main striking force of nine Beauforts and four Beaufighters follows. One Beaufort had to abort early on.

The ASV-equipped contact plane found the convoy, transmitted its position, and then headed for Malta. Caught by Bf-109s during the approach to the island, the pilot (FS S. E. Howroyd, ) was killed, and Beaufort AW-282 crashed short of the runway. While the other three members of the crew survived the crash, the navigator, subsequently died of his wounds in hospital.

Unfortunately, Howroyd’s position report was never received by the strike leader, FL J. M. Lander DFC (22 Squadron). Flying at sea level, the striking force passed the convoys line of advance without sighting it. Turning Southwest to search for the elusive foe, the escorting Beaufighters of 272 Squadron, led by SL W. Riley, flying about 500 feet higher than their charges, spotted several German Me-110s and Ju-88s providing distant air cover for the convoy. The series of combats bled away their precious combat fuel, and they were forced to turn for Malta. Lander knew the mission was in trouble. The departure of his escort left the Beauforts terribly alone. Several minutes later, when the target was finally sighted, the Beaufort crews were horrified to discover that, besides the strong naval escort, there were some 25 Bf-109s, Bf-110s, and Ju-88s overhead.

What followed was reminiscent of the Charge of the Light Brigade. Stripped of their escort, there was little the three sub-flights could do but fling themselves at the convoy and then flee for home. Five of the Beauforts managed to get off good drops, unfortunately without any result (though three hits were claimed). Then began one of the longest air battles of the entire campaign, as the badly outnumbered eight struggled to fight through the 70 miles to safety. Five , N1100 (PO G. Belfield) of 22 Squadron, N1169 (FL R. G. W. Beveridge), N1186 (FO R. B. Seddon), N1166 (PO B. W. Way), and X8923 (FO D. A. R. Bee), all of 39 Squadron, did not make it, the latter actually lost over the island itself. Of the 20 aircrew, only five (Belfield’s crew and FO McGregor of Seddon’s crew) were rescued. Of the three that reached Malta, Lander’s X8924, whose wing tip had actually hit the sea at one point, would not fly again while N1102 (FO S. W. Gooch) would be under repair for some time. Amazingly, other than sweat from the crew, FL A. T. Leaning’s W6505 came through the entire ordeal without so much as a scratch!

While the courage and devotion to duty displayed by the Beauforts crews could not have been higher, the aftermath of the mission was to have severe consequences on the campaign against Rommel’s supply lines. The combined squadron had operationally, for all intents, been wiped out. Besides the seventeen highly trained aircrew lost, only one operational Beaufort remained to return to Egypt. It had taken three months to accumulate 10 operational aircraft prior to this mission. It would take another two to replace them. Until June, the Beaufort Squadron had shot its bolt.

There was, however, one other unforeseen consequence of the mission.

With the loss of Beveridge, 39 Squadron had lost one of the Flight Leaders. The needed replacement had been lingering at Group for several months - one FL Reginald Patrick Mahoney Pat Gibbs, DFC - a man who in the coming months would stamp a huge mark on the course of the war in the Mediterranean. (Mark Horan)

U-85 was the first U-boat to be sunk off the North American coast after the start of the Operation Paukenschlag (Drumbeat) on January 13, 1942. On the day that she was sunk, 14 April, U-85 stayed on the surface through the engagement. After repeated hits on the boat, fatally damaging her, the order to abandon ship was given and maybe half of the crew got into the water and then U-85 started to sink again fast. USS Roper then dropped 11 depth charges onto the already sinking U-boat and its 2 dozen survivors and in the process killed everyone in the water. (Gary Kao)

German submarine U-203 torpedoes and sinks the British freighter SS Empire Thrush approximately 8 miles (12,9 km) north of Diamond Shoals, North Carolina. The antisubmarine vessel (”Q-ship”) USS Asterion (AK-100), masquerading as the freighter SS Evelyn (her original mercantile name), picks up entire crew (and the captain’s dog). The rescued sailors are enjoined not to reveal the fact that they were rescued by a “Q-ship” and to keep secret Asterion’s true identity.

The unarmed U.S. freighter SS Margaret is sunk by German submarine U-571 off the eastern seaboard while bound for New York City from San Juan, Puerto Rico. Although the Germans see the crew lower a boat and put rafts over the side, none of the 29 sailors from Margaret’s complement are ever seen again. (Jack McKillop) 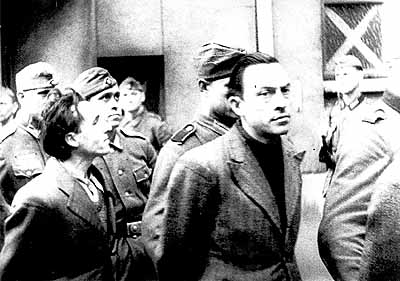 "Of the trials's 27 defendants, 25 were sentenced to death; two of the defendants were Jewish.
Here, heavily guarded Resistance members leave the courtroom after the trial.
Although the verdicts were unhappy ones for the defendants and for the Resistance, they hardly heralded the end of French opposition to the German-controlled puppet government.
At about this time collaborationist politician Pierre Laval reinstalled himself--with Hitler's support--as the chief of the Vichy government at about this time, which only spurred heightened Resistance activity."

"...Our small Army is dispersed and beginning to try to fight a six-continent war; our one-ocean Navy is trying to fight a seven-ocean war; our factories are trying to supply a world.
We are spread thin everywhere and are strong nowhere.

"If it were not that our forces overseas are obviously small and represent only a small fraction of the strength of the nation, our dispersion of effort might be termed highly dangerous; indeed it might lead to defeat in detail.
Even so, it is dangerous enough.

"General Marshall's visit to London rather clearly indicates that our main objectives have not been determined, that our strategic course for 1942 -- the year of decision -- has not been fully set, the strength of America, which means the decisive strength, has not been mustered or moved to the decisive theatre of action..."

Baldwin's phrase "year of decision" aside from being accurate, also refers to this book, which won the Pulitzer Prise in 1942.

At this point in 1942, the United States had 7 fleet carriers, 17 battleships, 37 cruisers, 171 destroyers, 112 submarines and no frigates or amphibious ships, together with other ships totaling 790 active.

Today the US has 11 carriers, 22 cruisers, 59 destroyers, 29 frigates, 53 submarines, 31 amphibious and together with other ships totaling 285 active, the lowest number since 1916.