RUSH: Mark my words, just as the truth about Tiger Woods has been exposed, so it shall be with Barack Obama. The parallels -- Lisa Schiffren had that great piece on this last week, the parallels between Barack Obama and Tiger Woods are stunning. We don't know if there's rampant sex romps going on with Obama. We doubt that. But everything else, they created for us a puff piece image of Obama, starting with his speech at the 2004 Democrat convention. We don't know who he is.

We don't know anything about the man other than his years agitating the community in Chicago, the things he's written about in his books. But there's this image of "we've never had someone like this before, there's never been a man like this.

He transcends normal people." Remember all these people gushing over him. Mark my words. At some point the same unmasking that has happened to Tiger Woods will happen to Barack Obama.

Tiger, Barack, and the Law of Transitivity By Lisa Schiffren

We are staring because we've been had. Betrayed. We see now that the image was all a fraud. The talent was real. But the things that made the public like Tiger personally -- the low-key demeanor, manners, and sweet smile of countless sports-page photos, magazine covers, political analogies, and most important, product endorsements, was an act. That would be betrayal enough. But it wasn't just Woods' act. The larger lesson here is about how much artifice -- sustained, deliberate deception -- goes into the construction of a public persona when there is profit to be made or power to be had.

..The Obama campaign did explicitly attempt to borrow the from the then-universal Tiger Woods appeal to allay any discomfort voters might have had with a mixed-race politician. They constructed a persona that would make the American electorate comfortable with a barely-known, first-term senator with a left wing voting record, a deliberately obscured personal and professional past, and no traditional qualifications for high office.

Ultimately, Woods is an exceptional golfer with a character problem. Barack Obama, by contrast, is not an exceptional, or even particularly competent, leader. But because so many politicians, interest groups and factions have an interest in his continued presence, no one is ready to reveal the man behind the curtain just yet.

..But many voters from both the center and the far left who believed in the Obama magic are increasingly dismayed by watching the human god fall to earth. This is a major problem because, as Shafer notes, the impulse of the betrayed is to tear their fallen deities to shreds.

We doubt that ... at least if you mean Obama with women (given his attraction to Michelle, we know that he doesn't go for feminine).

Maybe somebody can find out why Bambi appears to have two long scars on the right side of his head. They look like something that might have been left by brain surgery or by some seriously traumatic accident. Another Freeper pointed them out in a photo earlier today.

But of course his medical records, like everything else, are unavailable. A fair amount of verifiable fact was known about Tiger Woods, whereas in the case of Obama, everything is basically a rumor to begin with.

Can’t happen without a free and unbiased press. Might be a lot of net rumours, conservative blog posters etc, but cannot work without a curious and balanced media.

There have been salacious rumors from the get-go, fed by a lack of girlfriends pre-Michelle.

yu are quite correct. not only is Obama not attractived to women, I think it obvious from his appearance and from the stories swirling around him, that he is, er, attracted to men. He also consorts with plenty of unsavory types from Chicago. If they cut him loose, this will come out. Yes, America is pretty tolerant of gays generally. But they will not tolerate it in the President who they thought was Tiger Woods/Will Smith.

8 posted on 12/20/2009 9:36:21 AM PST by ConservativeDude
[ Post Reply | Private Reply | To 3 | View Replies]
To: livius
Maybe somebody can find out why Bambi appears to have two long scars on the right side of his head. They look like something that might have been left by brain surgery or by some seriously traumatic accident. Another Freeper pointed them out in a photo earlier today.

Do you have a link to that photo?

Any unearthing of Zer0 will happen...after he is out of office.

The unmasking of O...


Remember, Axelrod says it’s OK for us to be “GROUCHY”. 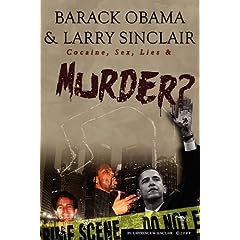 Cheating implies rules and understanding of rules. Mr. and Mrs. Sockpuppet seem to be above rules.

What cracks me up is that most of these leftist do what they do so they are more attractive to blond women who seek money and power and have the value to seal the deal.

It’s funny how the picuture of the reporter and the socketpuppet show them both guarding their loins.

I suspect the only 2 places he truly belongs are Kenya, and in the arms of another man.

Somewhere a domestic or foreign entity has damaging information on Barry. At some point, his house of cards are going to come tumbling down and I want to be at the front of the line LMAO.

This should be an interesting Christmas as I have many of my liberal family coming over. I took a lot of grief last year because I voted for Sarah. But I held my ground and told them they will have “buyers remorse” shortly after the inaugaration.

He will resign for health or some family reason once the real people in power consider him spent and put the squeeze on him.

Say this unmasking does happen. The US public has an expository moment on the grandest of scales. In that sudden vacuum, will we turn to Christ for strength and salvation or to the stand up guy ready to lead us through the perilous times, times that will require further sacrifice on our part, times that will lead to our rightful place in the world?

17 posted on 12/20/2009 9:47:26 AM PST by MurrietaMadman (Luke 23:31)
[ Post Reply | Private Reply | To 1 | View Replies]
To: opentalk
Tiger and Obama have manufactured images maintained by external interests, Tiger had his financial sponsors, Obama has his power brokers. Once the facade fades all you have left is the shell of a plastic Cupie doll, cute on the outside and nothing but stale air on the inside...About as hollow as Keith Olbermann's head...We have seen what has happened to Tiger'd image, it will be a matter of time before we see the shipwreck called Obama.

Well...don’t you remember that photo of zero and some other politician looking at the behind of that cute Brazilian teenager while they were on stage at some political even? I think she was wearing a purple dress and had long sort of reddish blonde curly hair. He looked like a hetro to me at the time.

He WASN’T looking at the chick if you saw the WHOLE picture....he was helping another lady come down the steps.