In January 2009, I had the distinct pleasure to meet one of the greats of Ufology. Kathleen Marden is the niece of Betty Hill, who was involved with her husband Barney, in a highly publicized abduction on September 20, 1961. The factor that makes this unique is that the abductors brought their victims on board a spaceship, the likes of which defied imagination.

Betty and Barney Hills account is documented in the well written book CAPTURED! The Betty and Barney Hill UFO Experience by Kathy Marden and Ufologist and original Roswell crash researcher, Stanton T. Friedman, MSc, so I will not try to duplicate efforts. Instead, I will refer you to their work for the historical account.

This abduction by alien entities originated several notable firsts. This would become the most publicized alien abduction in history to date, due in part to the amazing level of detail that has become known. This account also benefitted from the believability of Betty and Barney. Never were there two people who shunned the spotlight more than the Hills. The Hills were leaders in their community and well-respected. Betty was a social worker, and both were members of the NAACP. Barney was passionate about his civil rights work, having contributed to the movement as a member of the U.S. Civil Rights Commission in his home state of New Hampshire.

Another first would be the use of hypnosis in the treatment of the Hills to uncover their hidden memories. Contrary to some claims, the Hills did not immediately remember everything that had occurred. The treatment was undertaken by Dr. Benjamin Simon, who was the first to theorize and later prove the validity of hypnotherapy in the treatment of Post-Traumatic Stress Disorder among war veterans. This was not the only factor that made Dr. Simon the perfect person to treat the Hills. Dr. Simon did not believe in the extraterrestrial hypothesis, the belief that some unidentified flying objects are in reality extraterrestrial spacecraft piloted by alien entities, what some derisively refer to as "little green men". By believing there to be another causal factor to their condition, the Hills were not "led" by the doctor into erroneous memory recollections. The introduction of Dr. Simon lent to the validity of the account of abduction by aliens.

Umm...isn’t it kinda weird their names are Betty and Barney?

Kidnapped by the Great Gazoo? dont bet too much. 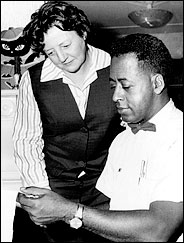 Betty Hill, whose assertion that she was carried off by otherworldly beings in 1961 inspired a national obsession with alien abduction that remains a staple of American popular culture, died on Sunday at her home in Portsmouth, N.H. She was 85.

The cause was lung cancer, her niece Kathleen Marden said.

Mrs. Hill was not the first person to tell of an alien encounter. But her account was the first to capture the public imagination on a grand scale, defining a narrative subgenre that has flourished in the decades since.

Mrs. Hill's account was the subject of a book by John G. Fuller, "The Interrupted Journey: Two Lost Hours 'Aboard a Flying Saucer' " (Dial, 1966). In 1975 it became a television movie, "The UFO Incident." The film starred Estelle Parsons as Mrs. Hill and James Earl Jones as her husband, Barney, who also said he was abducted.

The incident, the Hills said, occurred on the night of Sept. 19, 1961. Driving in the White Mountains of New Hampshire, they saw a light that seemed to grow larger and larger. Back home, they found what appeared to be shiny spots on the car's exterior. They could not account for a two-hour segment of their trip.

The Hills later saw a psychiatrist, who put them under hypnosis. Gradually, a narrative of the couple's lost hours emerged. They recounted many times that a group of short gray-skinned beings stopped their car and took them aboard a waiting spaceship. There, the Hills said, they were subjected to rigorous medical examinations that included inserting a long needle into Mrs. Hill's navel.

The account fit squarely in the Western narrative tradition. With a dark night, ghostly apparitions and sexual undercurrent, it had many Victorian gothic hallmarks, and it shared the common Western folklore theme of being spirited off and ravished by an otherworldly creature.

In the Hills' account, these traditional elements were transplanted to a modern but no less anxious time, the height of the cold war, when many people gazed nervously skyward.

"It's not unlike the Leda and the swan myth," said Terry Matheson, a professor of English at the University of Saskatchewan and the author of "Alien Abductions: Creating a Modern Phenomenon" (Prometheus, 1998). "The alien comes in, probes women in a distinctly sexual way for purposes that are equally inscrutable, but which may, we're told, make sense down the road."

Mrs. Hill was born Eunice Elizabeth Barrett on June 28, 1919, in Newton, N.H. A graduate of the University of New Hampshire, she was a social worker for many years. Besides her niece, survivors include three sisters, two children and three grandchildren. Mr. Hill died in 1969.

The Hills' cultural legacy includes films ("Close Encounters of the Third Kind"), television programs ("Roswell") and books, like those by Whitley Strieber and John Mack, that treat alien abduction as a plausible phenomenon.

I remember seeing the movie with James Earl Jones and Estelle Parsons:

10 posted on 02/21/2009 6:49:11 PM PST by beaversmom
[ Post Reply | Private Reply | To 1 | View Replies]
To: JoeProBono
From what I remember about this report was that the Hill's were on their way home from somewhere, and the next thing they knew, they were home.
They could not recall getting home that night. It disturbed them so much that, eventually, they went to a doctor, as they thought it strange that they were together, but that neither one could recall how they got home that night.

Only through hypnosis, did they find out what happened to them (or so says the hypno-therapy, which can also help you recall your previous lives, like the woman who was hypnotized on TV and recalled working as a prostitute in the Wild West!)

Some of you will recall that on July 8, 1947, a little over 60 years
ago, witnesses claim that an unidentified flying object (UFO) with
five aliens aboard crashed onto a sheep and cattle ranch just outside
Roswell , New Mexico . This is a well known incident that many say has
long been covered up by the U.S. Air Force and other federal agencies
and organizations.


However, what you may NOT know is that in the month of April 1948,
nine months after that historic day, the following people were born:

See what happens when aliens breed with sheep?

I certainly hope this bit of information clears up a lot of things for you. It did for me.

No wonder they love to support legislation to help illegal aliens!

13 posted on 02/21/2009 6:56:24 PM PST by Interesting Times (For the truth about "swift boating" see ToSetTheRecordStraight.com)
[ Post Reply | Private Reply | To 1 | View Replies]
To: JoeProBono
I read of their supposed abduction years ago so the details are a bit fuzzy.

After a long night time drive they arrived at their destination much later than the distance driven would require and could not account for the missing time. Thus the saga begins. Didn't Betty become a favorite guest speaker at UFO gatherings?

There have been many UFO sightings in the NH seacoast area (the Pease Air Force Base used to be there).

Another famous one is the “Exeter incident.”

16 posted on 02/21/2009 7:01:22 PM PST by beaversmom
[ Post Reply | Private Reply | To 10 | View Replies]
To: JoeProBono
I don't bother following up on these stories much anymore. They all remind me of Through the Looking Glass when Alice is in the toy shop. Every shelf seems to be full, but when she looked at any shelf closely, it was empty, although all the other shelves around it were full. Loch Ness, Bigfoot, Alien abductions, ghost stories, the Amityville Horror, they're all the same. I followed up on a couple of UFO books "this is the REAL story!" on the recommendation of a friend of mine that was the president of some UFO group. Same thing as always. One of the books he recommended was The Day After Roswell.

* THE DAY AFTER ROSWELL: A Former Pentagon Official Reveals the US Government's Shocking UFO Cover-Up, by COL. PHILIP J. CORSO (Ret.). Foreword by US Senator Strom Thurmond. Amazing revelations by a top US military man directly involved in dispersing alien artifacts from the crash of a UFO at Roswell, New Mexico, to major companies who then developed integrated computer chips, fiber optics, lasers and more. The author is a former member of the National Security Council under Eisenhower. The Foreword by Senator Thurmond created a big fuss, as he claimed he did not know his letter of endorsement would be published, so this was removed from subsequent editions and printings. This is therefore a unique Collector's Item! In mint, brand-new condition, with dust cover. No shelf wear. 341 pp. $ 99.00 Hardbound

Just for factual purposes, the comments about Thurmond are incorrect. Here's what actually happened. Phillip Corso had been an aide to Thurmond. Before publishing the book, he asked Thurmond to write a foreword. I read the foreword. It's standard boilerplate, in all likelihood written by one of Thurmond's aides. It compliments Corso as a good man and all around great guy with a commendable service record. There's no mention of UFOs or the subject of the book. Thurmond had this foreword written as a favor to a former aide, and it was totally general. He had no idea the book was this UFO junk. When he found out, he asked that his foreword be removed. The text was obviously written as a foreword, and Thurmond doubtless thought the book would be a military personal life story or some such.

This story may be the REAL one, but I've seen way too many Bigfoot in a Freezer stories to go snipe hunting again.

Slightly off topic perhaps, but Betty Rubble is one of those cartoon characters who has always been on my "anywhere, anytime" list.

She and Judy Jetson.

And the Flying Nun too, though I realize she's not a cartoon.