Boudreaux and his son Guy had been under investigation by state police since January. The streaming video shows aerial surveillance footage of the Boudreaux property in Broussard.

It was shot by Customs agents with the Department of Homeland Security.

The Boudreaux's had come under the gaze of Customs because of their international sales of pit-bull terriers.

The Boudreauxs were arrested today at their south Lafayette parish home. 2 1/2 months of investigation ended today at this home behind me when investigators made their move.

Investigators say 70 year-old Floyd Boudreaux is one of the most notorious dog breeders in Louisiana who raises his pit bull dogs to fight, then sells them off.

This morning, state police working with local and national Humane Societies and federal agencies served a warrant and arrested Floyd and his son Guy Boudreaux.

"Floyd Boudreaux is the fighting-dog Don. He's been breeding dogs for fighting purposes for 50 years. Some of his dogs are the foundation of some of the most prominent fighting lines in existence today."

At Boudreaux's home police found 68 pit bulls and 40 chickens and roosters. Many of the dogs had scars and bruises.

Laura Maloney, Society for the Prev. of Cruelty to Animals:

"This is a historical case. If we get him, it will send ripples through the dog-fighting community and nationwide."

Some people living in this Broussard neighborhood are outraged about the alleged dog abuse.

"I guess what bothers me the most is that they're on a 3 foot chains. Big, heavy chains. They spend their life under a chicken coop on a chain. That is not a life......that's horrible."

Boudreaux and his son were charged with 64 counts each of dog-fighting and animal cruelty. They're also facing charges for allegedly using steroids on the animals. 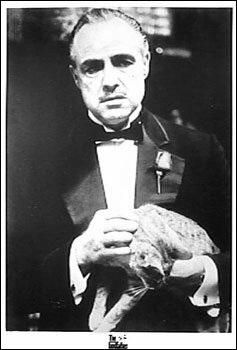 I hope that [expletive deleted] rots in jail until he dies there.

What is really sad is that any of the dogs that were found there, most likley will be put down.

They should have their pockets stuffed with steaks and then be locked in a room full of hungry pit bulls.

Who Let The Dogs Out?

I hope they make the charges stick.

I think he should be left in a cage with a few of his dogs and see whats left after a few days.

Glad he was busted ... hang him high.

But what was the Dept of Homeland Security involved for? Was the aerial surveillance considered "training"?

Well, you know, start a federal police force, and sooner or later it's going to expand its portfolio...

My sediment exactly - While I'm completely glad an animal abuser like this is locked up the idea of Homeland Security being involved is simply nonsense.

This is exactly why those preaching about our liberties being abused via Homeland Security (and the Patriot Act) have reason for concern.

"I guess what bothers me the most is that they're on a 3 foot chains. Big, heavy chains. They spend their life under a chicken coop on a chain. That is not a life......that's horrible."


Agreed. What's not mentioned here is the Humane Society's being infiltrated by PETA....

To: kanawa
My first reaction to this report was "Good bust"
But I'm picking up conflicting chatter on dog boards.
HSUS is a PETA-like org. Wouldn't trust anything they say.
If this guy was involved in dog -fight then throw the book at him, but if he was arrested for simply having a yard full of Pit Bulls, well...that is another story
I sure hope Ms. Maloney will be doing temperament testing on these dogs before condemning them to destruction.

~snip~
The animals - most found in healthy condition - will probably be euthanized, said Laura Maloney, director of the Louisiana Society for the Prevention of Cruelty to Animals. The New Orleans-based nonprofit was helping in the dog removal.

Maloney said the dogs could be too dangerous to place in homes.

"These dogs are bred specifically for aggression," she said.

The dogs were on heavy chains in a large fenced lot next to Broussard's home.

Maloney said investigators also found dog fighting "paraphernalia" in the home, including dogfighting magazines, videos of fights and treadmills she said were used in training to help build strength in the animals.

Williams said the father and son are accused of breeding, raising, training and selling dogs for the purpose of dog fighting, which is illegal in all 50 states.

Shane Vincent, who was raised next door and whose parents still live there, said he used to go to "dog pulls" with Guy Boudreaux -contests of dog strength - and knew that Floyd Boudreaux was "famous" for one of the pit bull bloodlines he developed.

But Vincent was surprised to hear about the arrests.

"I never knew him to fight any dogs," Vincent said.

Byron Girouard lives on Rue D'Or, down the street from the Boudreaux home.

"I've known them since I was 5 years old, and I've never heard them talk about fighting dogs," he said. "... Their daughter is my best friend. It's crazy. I heard they had the FBI in there."

Girouard said that the Boudreaux family is well-known in the area and "treated me like a son. If I needed help with anything, they're the ones I know would help."

A search on the Internet turns up several references to Floyd Boudreaux and his pit bulls, including references to him on the Web site for the American Dog Breeders Association.

According to information from the Humane Society, he is known for the "Eli" bloodline of dogs, considered a top choice for dog fighters.

The lineage dates back more than 50 years and Boudreaux's dogs sometimes fetch more than $10,000, according to the Humane Society.

An Internet Web site that lists contact information for Floyd and Guy Boudreaux offers "Eli" dogs and states that "owning a Boudreaux dog is like owning a piece of history."

The Web site includes a disclaimer that, "No dogs intended or sold for any illegal purposes."

Floyd and Guy Boudreaux each face 64 counts of animal cruelty, 64 counts of dog fighting and one count of possession of steroids.

The father and son could face up to 10 years per count on the dog fighting and cruelty charges.

They were being held in the Lafayette Parish Correctional Center on $101,500 bond each.

As horrid as this sport sounds to some, a dog trained to be dog aggressive is rarely human aggressive.

As horrid as this sport sounds to some, a dog trained to be dog aggressive is rarely human aggressive.