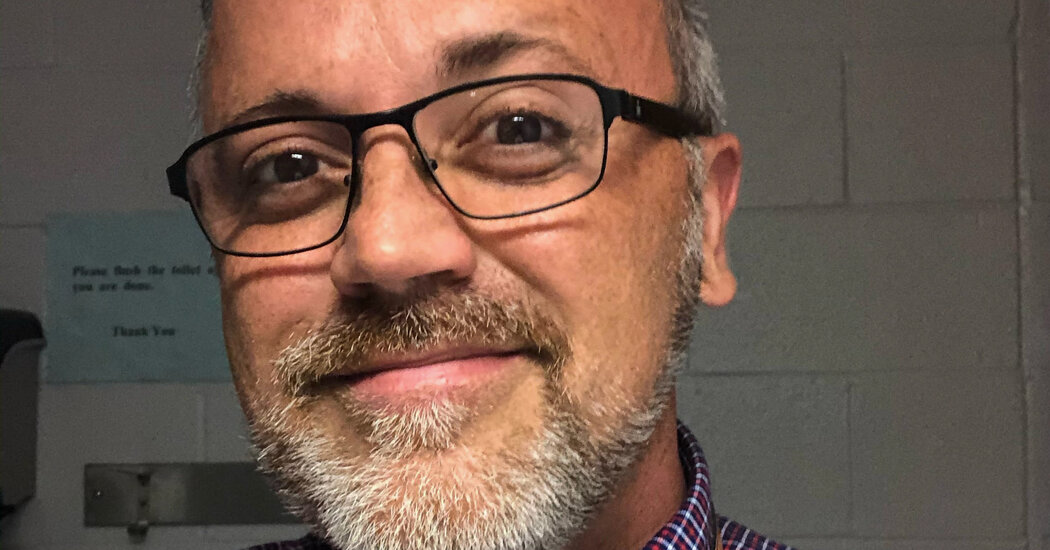 It was Read Across America week, and the second graders in the Hinds County School District in Mississippi were waiting for an administrator to read to them.

The administrator had forgotten it was her turn, said Toby Price, the assistant principal at Gary Road Elementary School in Hinds County, who was in his office at the time. He decided to fill in.

Mr. Price, 46, quickly grabbed a book — “I Need a New Butt!” by Dawn McMillan, one of his children’s favorites — and began reading it to the roughly 240 second graders over Zoom.

Later that day, on March 2, the district superintendent, Delesicia Martin, called him into her office and told him he was on administrative leave, Mr. Price said. He was fired two days later, accused of violating the standards of conduct section of the Mississippi Educator Code of Ethics.

In a letter to Mr. Price, the superintendent called the book “inappropriate.” She particularly took issue with the references to farting in the story and how “the book described butts in various colors, shapes and sizes (example: fireproof, bullet proof, bomb proof).” Ms. Martin called Mr. Price “unprofessional” for having selected the book.

“I expected a write up,” said Mr. Price, who had worked for the district for three years. “I did not expect to get terminated. I cried the entire way home.”

Mr. Price, who has been an educator for 20 years, said he had hired a lawyer and planned to fight the termination before the school board.

Ms. Martin and the five-member school board did not immediately respond to messages seeking comment on Friday. But Mr. Price’s termination brought swift criticism from children’s authors and PEN America, a free speech organization that fights bans against books.

The book, which was published in 2012, is about a boy who searches for a new butt after he discovered a “crack.”Credit…The cover of “I Need a New Butt.”

In a letter, PEN America said that “in positioning the act of reading a book as a violation of ethics, the district is implying that any educator could be terminated under similar circumstances” — a fear that many teachers are already grappling with after a slew of Republican-led efforts last fall to ban schools from teaching and discussing race, racism and other “divisive concepts.”

On the elementary school’s Facebook page, the grandmother of one of the students at the school posted a news story about Mr. Price’s termination and said she planned to speak on his behalf before the school board and fight to get “his job back.”

“My granddaughter heard him read the book and thought it was hilarious and not at all inappropriate!” the grandmother wrote.

Mr. Price said that was the reaction from students after he read the book. He recalled going into the hallway and being approached by students who thanked him for his pick.

“They loved it,” he said. “They all stopped me and said, ‘Mr. Price, that book was really good.’”

The Hinds County School District has about 5,500 students and 425 teachers and covers half a dozen towns near Jackson, Miss. More than 21 percent of the general population in Hinds County lives under the poverty line, well above the national average, according to Data USA.

Mr. Price said that it was particularly critical to teach literacy at his school, where many children rely on free lunches or reduced-price meals.

“I Need a New Butt!,” which was published in 2012, is marketed to children ages 4 to 8 and tells the story of a young boy who sets off to find a new behind after he sees a “crack” in his and fears it’s broken.

Mr. Price said that school administrators told him they were worried they would get complaints from parents about the subject matter.

When he was called into the superintendent’s office, he said that one of the administrators asked him, “Is this the kind of thing you find funny?”

Mr. Price replied, “Well, I did before I walked in here.”

He said he wanted only his job back so he could support his three children. His two eldest children — a daughter, 19, and a son, 18 — have severe autism.

And again I remark on the irony of this happening in Hinds County.

It is well past time to punish these leftists.

—as it should be—

Guy reading “I need a new butt” which sounds like a dumb-funny book for kids that doesn’t have anything to do with sex: Not okay.

I guess “The Cat in the Hat” is out as Dr. Seuss is now considered racist.

Now the left has turned against its own. As long at they keep firing their fellow leftists, I won’t care!

“My granddaughter heard him read the book and thought it was hilarious and not at all inappropriate!” the grandmother wrote.

Mr. Price said that was the reaction from students after he read the book. He recalled going into the hallway and being approached by students who thanked him for his pick.

“They loved it,” he said. “They all stopped me and said, ‘Mr. Price, that book was really good.’”

A “random” grandma and “students” approve, so what’s the big deal?

To begin with - how was this book even in the school? Who selected it? Who else has read it to their students? Are there other books like this trash available?

Who put him up to reading this book? Someone needs to get to the bottom of this...

Could be an innocently funny kid book. I woke have to read it to see. Just because it has the word “butt” in the title doesn’t mean it’s an inappropriate book.

It’s not like a drag queen dressed in lingerie read it to them.

Guess he got his butt handed to him on that one!

Thanks for posting this follow up feel good story.

I see what you did there…

No idea if book is appropriate, not likely something on my bookshelf.

Haha, right? The bad part is that he was just trying to do his job. His own kids like the book. (He has autistic kids so losing his job is going to cause him a great hardship.) He wasn’t trying to be offensive or an activist. Some other guy was supposed to read that day and couldn’t so he subbed. Now he’s fired.

I see what you did there, snicker.

Vulgar little books are to be read as jokes by kids and adults.