Following photos taken at the southern border depicting Border Patrol agents on horseback that many mistakenly said were whipping Haitian migrants attempting to cross the Rio Grande, the New York Times has issued a correction in their article where they accused the agents of doing that.

President Joe Biden, Vice President Kamala Harris, White House Press Secretary Jen Psaki, and countless media pundits all claimed that border agents were mistreating migrants with use of "whips," or that the migrants were being "strapped." Biden threatened punishment for those border agents, who were actually holding their horses reins, and not using them to strike people.

The Times article, published on Friday, originally stated: "The images of agents on horseback chasing, and in some cases using the reins of their horses to strike at running migrants..."

The article was later changed to the following: "Images of Border Patrol agents on horseback waving their reins while pushing migrants back..."

The outlet issued a correction that day, stating that they had previously "overstated" what actions the Border Patrol agents took. "While the agents waved their reins while pushing migrants back into the Rio Grand, The Times has not seen conclusive evidence that migrants were struck with the reins."

Backlash against the false statement that agents were whipping the Haitian migrants, statements echoed by President Joe Biden who said the migrants were being "strapped," came after the photographer who took the photos set the record straight on what he witnessed that day.

"I didn't ever see them whip anyone with the thing," Paul Ratje said. "He was swinging it, but I didn't see him actually whip someone with it. Those definitely can be misconstrued when you're looking at the picture." Despite agents being proven to have not struck the migrants, Fox News reported that these agents may still face some sort of punishment for actions they did not commit.

Bungle an evacuation. No problem.

“I understand you didn’t do anything. But, I’m still going to punish you for the thing that you didn’t do. Because I just can’t tolerate the idea of these things that didn’t happen. I hope you learn from this.”

3 posted on 09/28/2021 1:23:15 PM PDT by ClearCase_guy (China is like the Third Reich. We are Mussolini's Italy. A weaker, Jr partner, good at losing wars.)
[ Post Reply | Private Reply | To 1 | View Replies]
To: Eddie01
Wonderful, it only took them half a week to set the record straight when it was obvious they were wrong from the start.

It’s that interstice between “damage done” and “avoid the lawsuits”. Media play this game all the time.

Leave hundreds of Americans behind in Afghanistan to fend for themselves, hide in caves, forage for food and eventually be beheaded, no problem.

Biden operates according to his presumption of guilt.

...for being taller than the illegal aliens.

8 posted on 09/28/2021 1:29:04 PM PDT by moovova (There will never be another fair presidential election in the USA.)
[ Post Reply | Private Reply | To 1 | View Replies]
The Times has not seen conclusive evidence that migrants were struck with the reins."

No, the Times has not seen ANY evidence that migrants were stuck with reins. Which, by the way, are not whips, or even "straps."

Motto of the New York Times: Print any lie that advances the agenda.

Action must be taken against the border patrol agents because they triggered Mad Max and other woke-mob members.

If Biden punishes the agents for something they didn’t do, then he is even more feckless than I have been giving him credit for.

Biden was and idiot he should never have responded instead he made the whole situation greatlly visible and he took the wrong side just to pander to blacks who didn’t vote for him anyway, and won’t now with his vax mandates. how many times has he shot himself in the foot?

“The administration will punish border agents for not whipping blacks. This is reminiscent of the post civil war lack of whipping of blacks by southern republicans and will no longer be tolerated.”

If Biden is stupid enough to pursue this, what do the members of the Border Patrol have left, other than mass resignation? Could be that such an outcome is exactly what Biden and the pro anarchy Leftists want to happen. This won’t get any better, and will plague Biden and the Democrats indefinitely.

Unless of course Biden starts a World War.


Really? What consequences will Biden and his staff face for being ignorant imbeciles? 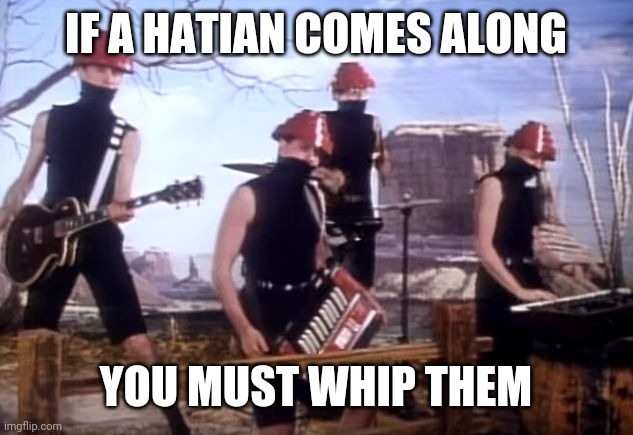 Biden: “We will discipline you for being photographed in a way which uninformed people like me might have construed as whipping illegal immigrants.”

While our outrage was palpable, wily Lefties were lying in wait——like common criminals——til they had an angle they liked.

They jumped in headfirst———so they could flaunt their phony “tolerance and compassion” -——— at falsified reports that invaders were being (gasp) “whipped”.

The lies will cease when my politics are done!

Waiting for a Joe Welch moment here that will never happen with Mr Biden!

For those who were never taught, the LEFT has, for my entire lifetime, used the bludgeon of the 1954 'Army-McCarthy Hearings' to besmirch Senator Joseph McCarthy (R-WI), and the rest of the anti-Communists over the decades, for an excessive use of power, especially against the 'little guy'! This pushback centers on the famous retort by the US Army's lawyer, Joseph N. Welch, to Senator McCarthy upon the Senator losing an accusation of Communist influence against another staffer; “I beg your pardon. Let us not assassinate this lad further, Senator. You've done enough. Have you no sense of decency, sir? At long last, have you left no sense of decency?” [See final paragraph for context of this!]

This "cry from the heart" (cri de coeur) has become a touchstone for the LEFT against its opposition in almost every battle! As recently as this past July, President Biden advocating for the Federalizing of election criteria and control, said the following; "We'll be asking my Republican friends in Congress and states and cities and counties to stand up for God's sake, and help prevent this concerted effort to undermine our election and the sacred right to vote," Biden said. "Have you no shame?" [Sound familiar?]

So ... NOW we have a massively misinterpreted photograph that the same President, Joe Biden, has had ample opportunity to retract SHAMEFUL castigations against CBP Agents using tactics of horsemanship. Yet he has, to date, let those comments stand, the threats of punishment stand AND he has yet to visit the disaster his policies have created on that border!

President Biden, have you no sense of decency, sir?

It was not until the fall of the Soviet Union and the revelation of the "Venona Project" ~40 years later that it was revealed that Soviet infiltration, aka "Agents of Influence", was sufficient that the intelligence decrypts were not passed to superiors for fear they were the people that were Soviet Agents.

NY Slimes: Try printing the TRUTH occasionally and you won’t have to correct the lies you’re spreading.