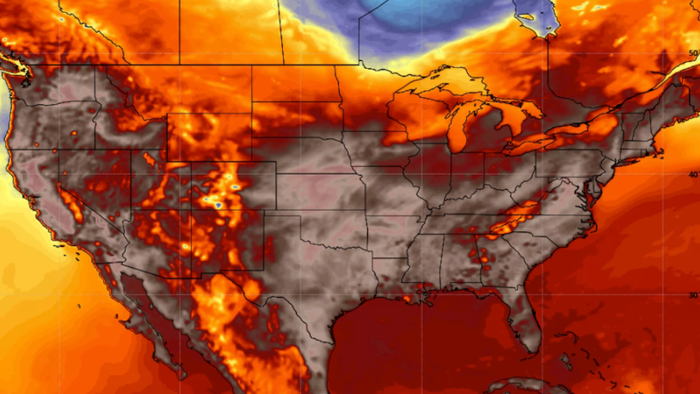 At the beginning of the week, we told readers the dog days of summer have finally arrived with above-average temperatures for most of the country.

“Dangerous heat and humidity in the Northwest, Northeast, and central portions of the CONUS have prompted Excessive Heat Warnings and Heat Advisories. Severe thunderstorms will impact the areas from the Midwest into the Great Lakes through Thursday,” the National Weather Service (NWS) wrote on its website.

“Around 195 million Americans are under a watch/warning/advisory for dangerous heat. Yes, it’s summer, but this type of heat can kill,” the National Weather Service (NWS) warned in a tweet.

Temperature forecasts for the lower 48 states show mean temperatures will peak Friday/Saturday and trend lower through Monday, with another spurt of hot weather slated through Aug. 22.

NYMEX Natgas futures have slumped nearly 4% in the last four sessions as traders begin to price in colder weather next week.

As we’ve shown, average temperatures are peaking for the lower 48 states and should begin to decline after this month.

Meanwhile, hot temps and a megadrought in the US West have fueled 105 large files burning 2.4 million acres in 14 states. The largest fire is Dixie in northern California, burning more than 500,000 acres so far.

Making matters worse, Bloomberg reports a La Niña weather pattern is forecasted to develop during the August-October season and last through the 2021-22 winter.

The La Niña pattern is characterized by unusually low temperatures in the equatorial Pacific Ocean and is linked to floods and drought. Meanwhile, El Niño-Southern Oscillation (ENSO) neutral conditions are favored for the remainder of the northern hemisphere summer, the NWS’s Climate Prediction Center (CPC) said in its monthly forecast. There is about a 60% chance of ENSO neutral conditions for the July-September season, and a 70% chance of La Niña from November through January 2022, the CPC said. The ENSO weather pattern is marked by average long-term ocean temperatures, tropical rainfall and atmospheric winds. Last month, the forecaster said there was a 51% chance of ENSO neutral conditions for the August-October season. -Bloomberg

So back-to-back La Niñas could transform US West into a continued tinderbox?

So it’s a hot august... imagine that.

The year 1900 has a remakably similar record high summer heat pattern throughout the United States. It was topped off by the Galveston hurricaine that destroyed the city and killed over 8,000 people.

The weather changes and differs from year to year, amazing. Well not really, forecasters can’t even be accurate one week out.

And the way the media report on this, hot summer days must be evidence of global warming/climate change.

These brush fires and wild fires have happened out west for as long as anyone can remember, but it’s only in recent years, that they are reported as being caused by climate change.

My unanswered rhetorical question is, what about the ice ages in earth’s history? During the last ice age, Chicago was buried under a mile of ice. How did all that ice melt, if not for global warming; natural changes in climate cycles?

And this segways into another question I always have, which is, how do these enviro extremist types know how much of climate change is due to man, and how much is due to natural cycles which we don’t understand and have no control over? They act as if man is the only cause of any changes in climate, and that we have to fundamentally transform how our economy and society functions, so that we have solved climate change.

But the fact is, we could do all of the things they would like to see happen, and it could well make no difference at all, because of the natural cycles we have no control over.

Duhhhh... It’s August. It’s summertime. It’s hot.
This is just another classic case of complete liberal insanity on full public display.
They’re total morons and are in charge of the government....so they think.

Let’s just wait it out. Give it a couple of months. I think that by October and November, the weather will have cooled ocnsiderably.

Sure, but just eight months ago it was 5 degrees - it's getting hotter....

It’s supposed to start raining in Central Texas this weekend and continue through next week. On average that never happens in August. The first rains after a hot summer are at or after Labor Day. It’s been a crazy mild summer here. Rain. Too much rain in June. A very mild July, and now rain in August. Just after our Snowzilla 100 year cold snap. Yes weather is changing, that’s what it does. But it’s not getting warmer.

In six months, we’ll be talking about the extreme cold.

I better go let the Hemi idle in the drive way for a couple hours to help pollute the skies and bring the temps down. Or maybe burn some tires to add to the smoke already blanketing our area. Current AQI is 189. Was 263 the other day.

In the good old Summertime.

Much of July was cooler, too.

And, the Drought is over.

I believe the it’s called the Circle of Life. Our climate shamans of today have never heard of the concept. For them, it’s all proof of Apocalypse.

These deadly weather extremes are even more dangerous than the killer virus!

This can all be solved if we give more money and power to the fedgov.

This 40 minute video produced by the Weather Channel tells a hell of a story.
When Weather Changed History - 1900 Galveston Hurricane

It has been an very mild summer in East Texas. Lots of rain and we have yet to make it to 100. Same for Waco, which typically has more 100-degree days than us.

18 posted on 08/12/2021 9:07:27 AM PDT by crusty old prospector
[ Post Reply | Private Reply | To 11 | View Replies]
To: blam
The La Niña pattern is characterized by unusually low temperatures in the equatorial Pacific Ocean and is linked to floods and drought.

Floods or drought? Which one is it?

I don’t have to imagine. I am in it. We have had over 100 degree temperatures for a month now reaching 117 at one point. Yes we have had temperatures like this before but they have NEVER lasted this long.