To borrow from an old Jim Croce song, you don’t tug on Superman’s cape, you don’t spit into the wind, and you don’t mess around with Elon Musk. Particularly if you’re the Washington Post and you’re owned by Jeff Bezos, the erstwhile richest guy on the planet.

Did I mention the top spot currently belongs to the aforementioned Mr. Musk?

As our friends over at Twitchy noted, you’d think by now WaPo would know better than to purposely tangle with Musk. The two richest people on the planet — Musk currently sits on top with an estimated net worth of $197 billion, with Bezos in the two-spot at $182 billion, as updated by Investopedia on January 19 — have been at one another for years.

Our story begins with WaPo on Tuesday publishing a less-than-flattering piece about Musk, as it relates to Tesla, titled “Elon Musk moved to Texas and embraced celebrity. Can Tesla run on Autopilot?” with the subhead: Investors fear a world where Musk no longer leads the company. But his attention is already going elsewhere.”

Here are a few excerpts — for “color,” as they say.

Elon Musk says he is stretched too thin.

Twice in a matter of days recently, the 49-year old complained of what he called an “insane” work schedule, juggling responsibilities with his car company and aerospace firm and taking in “torrents of information” in wall-to-wall meetings.

But critics say the rigors of Musk’s personal schedule, and the seeming cult of personality that has developed around him, are beginning to show in the car company he runs — the one that he took from an upstart pioneer in electric vehicles to the world’s most valuable automaker.

Musk, they say, is drowning in outside commitments like his aerospace company and other endeavors while letting quality — and strategy — at Tesla fall victim. And there are familiar concerns.

The Post then quoted multiple “proof sources,” no doubt selected to bolster the desired conclusion it came to before the first line was written. One of those sources was Ross Gerber, a Tesla investor and supporter of Musk, who is close to the company.

“There have been years past where some of his behavior was horrifying and had huge costs, especially from his little tussle with the SEC. And he’s come a long way. What I’m worried about is his success makes him a little bit loose again.”

In a regulatory filing earlier this month, the company highlighted the risk it takes by relying so much on Musk, reported WaPo.

“We are highly dependent on the services of Elon Musk, our Chief Executive Officer and largest stockholder,” Tesla said in the filing, in language unusual for the way it cited a corporate CEO’s numerous outside commitments. “Although Mr. Musk spends significant time with Tesla and is highly active in our management, he does not devote his full time and attention to Tesla.”

And the following, from Ed Niedermeyer, author of “Ludicrous: The Unvarnished Story of Tesla Motors”, the source of WaPo’s “cult of personality” reference:

“There isn’t a culture at Tesla really other than ‘let’s do what Elon wants to do.’ It [is] clearly reflected [in] Elon’s increasing isolation inside the company. He becomes more powerful and that power sort of isolates him more and more.”

In another example, WaPo went after Musk’s “public meltdown” during a Tesla earnings call in April — “raging against California officials’ shutdown orders in an expletive-laden rant.”

“To say that they cannot leave their house and they will be arrested if they do, this is fascist,” Musk said on the call, adding: “This is not democratic — this is not freedom.”

The article took several more shots at Musk, and to be fair, included several acknowledgments of the success of the somewhat eccentric multibillionaire, but it was definitely a hit piece, Wapo-style, meaning “written in a professional manner while ‘subtly’ twisting the knife along the way.”

You’ve dislodged, at least for now, Jeff Bezos as the richest guy in the Universe, your car company is the most valuable car company in the world, SpaceX —your “rocket company,” as described by WaPo — has safely ferried American astronauts to the International Space Station and back, the first time that’s happened aboard an American spacecraft in ten years, and the newspaper owned by the “I’m number two!, I’m number 2!” guy, with whom you’ve had a running “spat” for years, does a not-so-subtle hit piece on you.

How would you react? Here’s how Musk reacted, via WaPo.

Tesla did not respond to repeated requests for comment. In response to emails seeking comment, Musk replied only: “

Give my regards to your puppet master.”

Game, set, match. Thanks for playing.

Quote of the day: "Give my regards to your puppet master [Jeff Bezos]," Elon Musk said in response to the Washington Post's request for comment on an article published by the newspaper today. pic.twitter.com/YItMCHiF2X 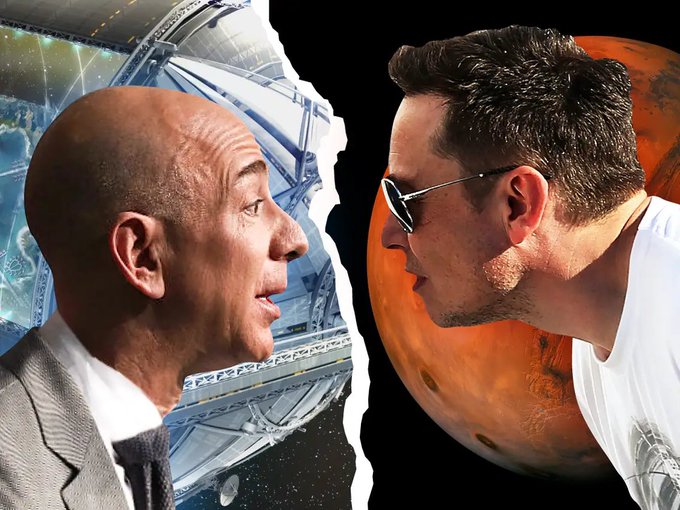 As properly called by our friend Benny Johnson: 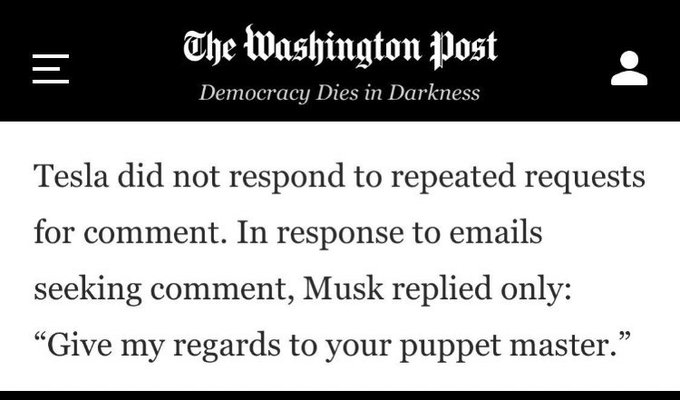 Pretty sure that left a mark.

Elon Musk is one of us-would i lie?

I always knew Bozos was a number 2.

Elon is a good kind of crazy.

I am really beginning to like this guy Elon Musk

Bravo to Musk!
While Bezos sells men’s underwear and female hygiene products
Musk is sending Astronauts and paid payloads into Space.
Bezos can’t even get rocket to Space.
FU Jeff.

It has always been perplexing to me how these socialist slobs are able to tolerate one another.

Perhaps they’re all finally beginning to realize that what they desire so much in theory, is so unobtainable in practice.

Thus, their collective frustration levels are beyond the boiling point. 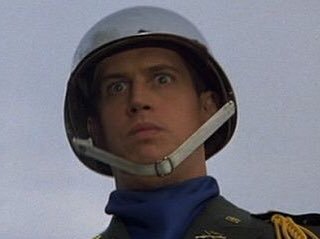 President Trump gave one of, if not the very best speeches of his entire presidency in Florida after Elon Musk’s spaceXlaunch last May or June. Of course the propaganda press did not even cover it. It was such an outstanding blend of American exceptionalism, working together to defeat the pandemic, and praise for the private sector sending the spaceship off. It was a speech that every American should have heard. Instead it was suppressed.

that slight pressure wave transiting in the background is the sound of the world applauding Musk.

Did you know that he’s the richest African American in the world?

RE: Did you know that he’s the richest African American in the world?

No I did not. How many percent of Elon is Black?

Too bad he’s not a natural born citizen.

Probably 0. He is from South Africa.

If he is, I would work for him in a second. I am not smart enough, hard working enough, .... still I would work for him and give what I can. BSEE Computer Engineer spending the last 20 years killing bag guys from max distance allowed by treaty. Not technically space but high. Before that working automotive, and Space station thermal controls ..... rinse repeat.