Bernard Lewis, the preeminent Middle East researcher of the past few generations, said after Turkish President Recep Tayyip Erdogan rose to power that Iran could turn into Turkey, and Turkey might morph into Iran. Lewis meant that after the mullah regime was ousted, Iran might fulfil the hope for moderation and contribution that were once hung on Turkey, whereas Erdogan could drive the modern and moderate Turkey he inherited into destructive radicalism in the style of the Islamic Revolution. For now, the threat from Ankara is materializing, but not the hopes for Tehran.

In addition to the disaster he has brought down on his own country, Erdogan's megalomaniac policies have outraged his neighbors in the Fertile Crescent, the Arabia Peninsula, and the Mediterranean Basin. The damage he is causing is being discovered in Europe. His policy is hurting American and Israeli interests. Hamas, Qatar, Azerbaijan, and the government of Fayez al-Sarraj in Tripoli are his only allies.

In Europe, he poses a multifaceted threat. The NATO alliance was established and destroyed by democratic nations to address the Soviet (now the Russian) danger. Turkey was a little unusual, but gradually developed democratic characteristics and NATO could depend on its large military for its needs.

So are we on the wrong side of this phoney war between turkey and Russia?

2 posted on 10/14/2020 9:20:48 AM PDT by Brilliant
[ Post Reply | Private Reply | To 1 | View Replies]
To: Roman_War_Criminal
The competition between Iran and Turkey for regional Islamic hegemony has been in the open for decades, since the fall of the Soviet Union. The first element of that competition then became the former majority Soviet states: Kazakhstan, Kirghizstan, Uzbekistan, Azerbaijan, Turkmenistan along the ancient Silk Road - and connecting with the eastern portion of China.

Once one or the other gained a foothold, the next step was to use that basis to gain preeminence over all Islamic states and begin the push to reclaim the rest of the "Ummah" for Islam and from there the world.

Turkey stopped being an ally and friend the moment Erdogan gained power.

3 posted on 10/14/2020 9:41:29 AM PDT by Chainmail (Remember that half the people you meet are below average intelligence)
[ Post Reply | Private Reply | To 1 | View Replies]
To: Chainmail
Turkey stopped being an ally and friend the moment Erdogan gained power.

Partner, yup you are correct!!!

Turkey wants to be the next Iran and we will arm the Armenians to the teeth and help them out directly if we need to be there.

The Russians and Armenians are mostly Orthodox Christians and Azerbaijan and Turkey are ruthless Mooselimbs.

Erdogan is an Idiot Mooselimb and most of the Turkish people do not like this guy at all.

I will keep saying this but "The Mooselimb Religion is a Gutter Religion" and Erdogan must go now!!! 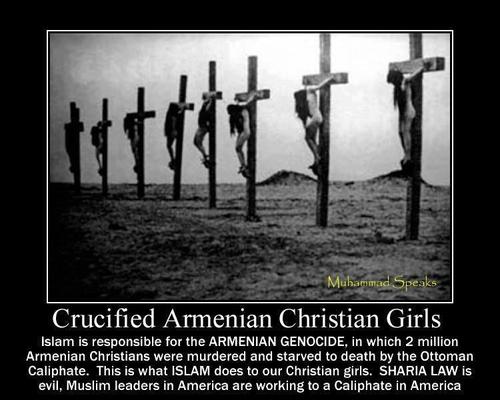 ANY ethnically-Muslim country, no matter how currently-secular, can quickly morph into Islamic radicalism.

Iran used to be fairly secular under the Shah.

By the way, that Crucifixion picture is from a MOVIE about the Armenian Genocide.

The Turks didn’t crucify people, they preferred impalement (which was less work). There’s plenty of real pictures of Turkish atrocities against the Armenians.

that maybe so, but i don’t trust the aap for any kind of fact checking at all