Dr. Anthony Fauci, the polarising director of the National Institute of Allergy and Infectious Diseases, slammed everyday Americans for refusing to go along with ‘authority’ on medical matters, and accused people of ‘amazing denial’ when it comes to ‘truth’. 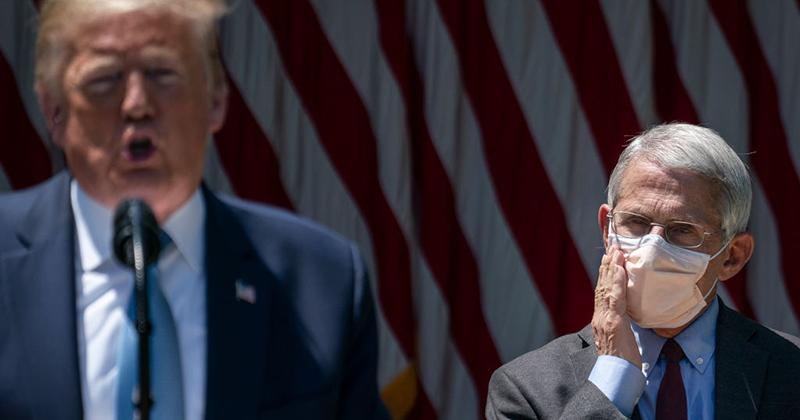 Speaking on a podcast called Learning Curve, produced by the Department of Health and Human Services (HHS), Fauci charged that “unfortunately, there is a combination of an anti-science bias that people are — for reasons that sometimes are, you know, inconceivable and not understandable — they just don’t believe science and they don’t believe authority.”

“So when they see someone up in the White House, which has an air of authority to it, who’s talking about science, that there are some people who just don’t believe that — and that’s unfortunate because, you know, science is truth,” Fauci asserted.

“It’s amazing sometimes the denial there is, it’s the same thing that gets people who are anti-vaxxers, who don’t want people to get vaccinated, even though the data clearly indicate the safety of vaccines,” Fauci proclaimed, adding “That’s really a problem.”

Perhaps the real reason Americans don’t trust Fauci is that he’s consistently flip flopped and contradicted himself on ‘the truth’ for months.

The man also exudes authoritarianism, and clearly has a problem with anyone who questions his superiority.

Fauci also has a long history of being the front man for a network of powerful Big Pharma and Big Medicine interests, pushing vaccines and medicines in a clear conflict of interest.

How dare this man.

Do you want to know why they are learning to hate scientists for real Dr Fauci?

Because your group lies about science & your ilk drove the truth telling scientists out of their rightful places inside the instutions calling bullshit on your lying about masks. pic.twitter.com/VJLTGT0GOe — Eric Weinstein (@EricRWeinstein) June 18, 2020

Scientists like me who don’t go along with cowards & crowds cannot disrupt your group’s lies because we are outside. Imagine if I was tweeting from the National Science Foundation or MIT. It would be a national news story about how your cabal lies and degrades faith in science: https://t.co/leYsCerG3o — Eric Weinstein (@EricRWeinstein) June 18, 2020

"But you prattle on. We will one day find out later that you suspected all along that the Wuhan BS-L 4 virology lab might well be involved, but that you didn’t say so for this or that political reason.

Because you aren’t a scientist. You play one. You are an MD turned actor.

ven when I agree with the conclusions of your instutional pseudo science cabal, you cheat to get to our shared conclusions on vaccines, viruses, climate, etc.

So you want people to believe in science again? Ok. Call-yourself-out. Admit that your crowd **lied** about our masks.

And not to put too fine a point on it: your group is sitting in chairs reserved for people who don’t do what your cabal just did.

You just don’t have what it takes sir. I’m sorry. But science isn’t acting. It’s not a beauty pagent. It’s not politics.

When science has been politicized, it has no credibility, same with authority abused.

Where was his “courage” when blacks were looting and rioting....

We believe in science and authority but we reject corrupt and faulty!

We sure as hell don’t believe Fauci.

I believe true science, but today’s science has been completely politicized. I don’t believe authority - don’t even try to make me believe someone who has power over me.

The truth is fauci doesn’t speak the truth. Nobody listens to a liar .....

We don’t believe you, Fauci. You have changed your tune so many times to fit the narrative du jour to please your masters. Who in their right mind would call you a scientist?

So he is not the one in authority who admitted to lying to the public about the science of facemasks? I’m amazed at the audacity and hubris of his lies.

We watched you for at least two months stand right next to the President and you wore no mask. So don't tell us what to do. You're full of sh**.

Dr. Fauci, seen pictured with the Democratic elite, ignores that many patriots understandably question if he is a deep state, “Orange Man Bad” Democrat helping to try to get PDJT voted out of office in this politically charged election year.

Trump should fire Fauci. And replace him with Dr. Judy Mikovits.

12 posted on 06/19/2020 8:26:53 AM PDT by FreedomVsControl
[ Post Reply | Private Reply | To 1 | View Replies]
To: SeekAndFind
Fauci charged that “unfortunately, there is a combination of an anti-science bias that people are — for reasons that sometimes are, you know, inconceivable and not understandable — they just don’t believe science and they don’t believe authority.”

I wonder what his thoughts are on media bias, media lies and media omissions and how that effects decision making.

dr fauci, how many genders are there?

THERE ARE FOUR LIGHTS!

Try: No one believes FauXi. Why? Because he is completely contradictory, uses flawed models, flip flops, is politically motivated, is a preening peacock, and is a putz.

He is totally debunked. He is not credible. He does not know what he is doing. He is the root of the unpreparedness.

The foundation of Western science today is the scientific method developed by the Royal Society in 17th Century Britain.

And what was the original inspiration behind the Royal Society, summarized in their motto:

“Take no one’s word for it”

Thinking themselves wise, they become as fools...

Well at least half the time. Since he is sooner or later on both sides of every issue.

Apparently this guy has forgotten that Liberty is the founding principal of America of our nation.