Failed Presidential candidate Hillary Clinton accused them of “domestic terrorism” for daring to show up to petition their government for a redress of grievances.

Again, they attacked nobody, looted nothing, burned not one thing. But these Americans exercising their First Amendment right to peaceably assemble were domestic terrorists in the eyes of Hillary Clinton.

To be fair, Clinton wasn’t the only one accusing them of terrorism. A hell of a lot of people in the news media and blue checkmark Twitter idiots did as well....Minneapolis is on fire right now. Businesses are being looted. People are being shot; buildings are ablaze.

Yet according to the news media, the rioters setting Minneapolis ablaze are merely “protesters.”..

It’s because of political correctness. There is fear of calling black rioters criminals.

Off topic but I wonder how much of this is spontaneous. A police official in Minnesota, who I noticed happens to be black, said he thinks that many of the rioters are from out of town.

During the Ferguson riots, the majority of those arrested there were from out of town. They were imported into Ferguson to riot. , were Outsiders brought into Minneapolis to riot?

Stay tuned. And how was it that all of a sudden we see demonstrations and many other cities at the same time?

The looters in Minneapolis are indeed terrorist. Look at their actions.

But there is more.

We NOW see the extent to which Minneapolis is stuck in the Dem liberal fascist ideology, stuck in plantation mentality instead of becoming American citizens who pull themsleves up to pursue happpiness, Instead of pursuing happiness they are still pursuing non existent slave overlords who are figments of Democrat invoked historical illusion.

Now that the 4 Minneapolic Police have committed what appears to be a crime of murder, all of these putative Dem invoked modern day “slaves” revolt. What they should be doing in lawyering up the victim’s survivors so they can punish the City of Minneapolis with damages in the millions. But no, the revolting “slaves” punish innocent business owners by looting, beating up a wheel chair bound woman, and next what....raping?

What a laugh. These looters could be shot by business owners, just as one pawn shop owner did regardless of what civil complaint these “slaves” have against the Minneapolis Police.

But I also believe firmly that there are 4 police officers that should be under arrest at this point, and placed on restricted travel etc after a bail hearing. Definite flight risk..

If they don’t play by the rules is it better to complain or to put them on the disabled list?

Terrorists have a political agenda. People who loot and burn are criminals. They are not forwarding any type of political point.

They are criminal thugs.

These ridiculous "solidarity protests" are ginned up.
Whoever is ginning them up is a criminal, IMO.— Amazing Polly is FREE and will act like it (@99freemind) May 29, 2020

Hillary doesn’t seem to understand the first thing about what makes America great. She’s the last person anyone should want in a position of public service. She doesn’t seem to get it though.

8 posted on 05/28/2020 8:33:35 PM PDT by euram
[ Post Reply | Private Reply | To 3 | View Replies]
To: euram
Jacob Pederson of the St. Paul PD is outed as the individual who smashed the windows at AutoZone. Police are posing as protesters burning buildings to portray a false narrative. 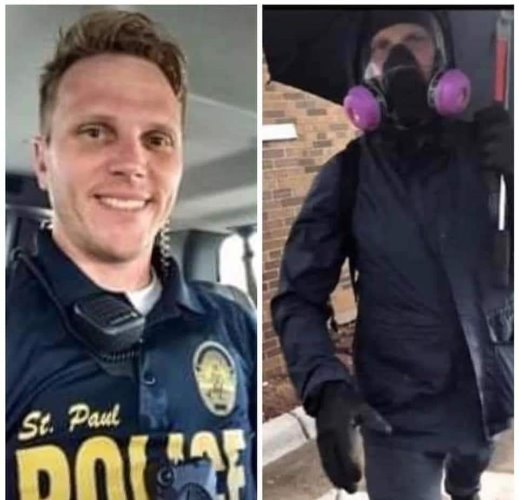 Naturally, they didn’t point out that blacks are disproportionately the perpetrators of crime.>>>>>>>>>>

I believe the ‘correct’ descriptor is ‘demonstrator’ or ‘protester’. They are not to be referred to as ‘rioters’ or God-forbid, ‘thugs’.

Sorry, I forget. Can anyone tell me the difference between a terrorist and am insurgent?

Call them all what it is in a DNC Utopian city: the innocents who voted it all in place and feral barbarians in a sh*thole on fire. The police,fire and the city administration are far gone and it’s now anarchy. Scary sh*t indeed.

Not that I know. Most news media will never refer to them as “terrorist” unless it involves conservative majority and anyone that obviously supports Trump.

Neighbors are now saying they never knew Chavin was a cop

Not only that, I can also tell you how they are similar:

an advocate or practitioner of terrorism as a means of coercion through fear , using various acts of murder, maiming , torture, blackmail, decapitation and enslavement, without any connection to the lawful military of any nation except o a sub rosa basis. Terrorist combatants are not covered by the Geneva Convention. Terrorosts can be shot on sight while engaging in terrorist activity by private citizens exercising their 2nd amendment rights.

a person who revolts against civil authority or an established government especially : a rebel not recognized as a belligerent in time of war, and as such, not subject to the laws of military combat, but subject to the laws of against crime. Felon insurgents in some states can be shot on sight, and certainly in all states can be shot by citizens exercising their second amendment rights in defense of their property.