A US Air Force officer has defected to Iran and shared information that could cause "serious damage" to America's national security, officials have revealed.

The former Air Force intelligence specialist was charged with espionage and was accused of working for Iran, according to an unsealed federal indictment.

The announcement arrived after Assistant Attorney General for National Security John Demers and other senior officials held a call with reporters to discuss what they called “a national security related action involving Iran”.

The officials discussed the unsealed indictment against Monica Witt, a former counterintelligence officer for the Air Force Office of Special Investigations. Ms Witt defected to Iran nearly six years ago in 2013.

So this was done under Obama’s watch????? Interesting.

Good thing our CIA is right on top of this, might have been some very important cocktail chatter between Mike Flynn and ambassador kislyak they missed.

And they jut around to unsealing the indictment? Well it seems our military secrets are in good hands with pack of Keystone Cops!!

May she receive a JDAM enema soon!

The CIA can’t get a rendition order on this treasonous woman?

Then contract the Mossad to bring her sorry Muslim a$$ out of Iran into the USA.

Yes. Looks like it was put on the back burner until a new president took over.

Note that Yahoo doesn’t mention that she converted to Islam or that she is in Iran, mentioning she is “at large”.

Counterintelligence may be counter intuitive but it is not done for entertainment purposes.

She has the quals to be SecState under the next rat president.

any relation to:
Homeland Security Secretary — James Lee Witt, who headed the Federal Emergency Management Agency under Clinton to rave reviews, has emerged as one contender for DHS

So she did this damage under Obama, they knew about it and it is just now being made public? No shock here.

...and we never a thing until now? 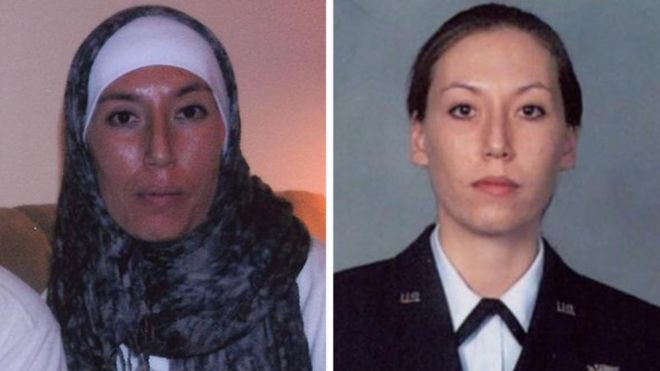 Might explain why our president scoffs at the at the advice from some of our military and security “experts.”

This shows another massive failure by our intelligence (sic) agencies, the FBI, CIA, NSA.... who were aware of her underhanded crap going on with support for Iran and they did NOTHING!

The very least Francis could be doing is raising theological questions on the assertions made in the Islamic codex (which is their code of observance and behavior) known as Sharia, Beginning with this question
http://www.theusmat.com/islamandfreewill.htm
Instead of reaching out to and defending what Judeo/Christian beliefs are. Challenging the claims that Islamist make they are following God’s command when ruthlessly murdering and torturing non believers and destroy their edifices. Parties with suppressors of the faith

Tell Iran she is gay and maybe they will execute the bitch.