It’s Sunday so I offer a prayer for journalists: 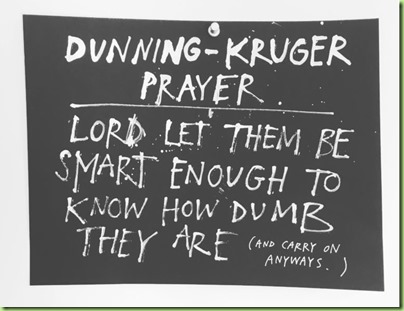 If you’re unfamiliar with the Dunning-Kruger Effect it states that some people are not only incompetent but their incompetence robs them of the mental ability to realize just how inept they are. Or put another way, they know not what they know not… 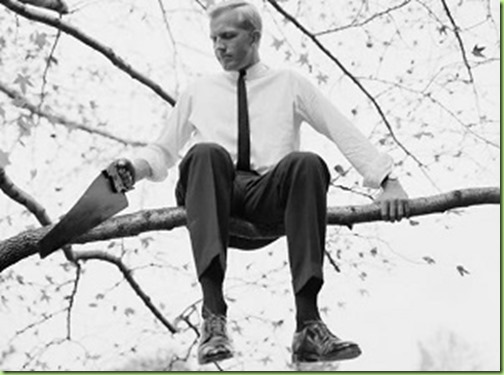 That seems to explain the vast majority of the journalist class. And perhaps this explains why: Journalists drink too much, are bad at managing emotions, and operate at a lower level than average, according to a new study. Excerpts:

Journalists’ brains show a lower-than-average level of executive functioning, according to a new study, which means they have a below-average ability to regulate their emotions, suppress biases, solve complex problems, switch between tasks, and show creative and flexible thinking…

The results showed that journalists’ brains were operating at a lower level than the average population, particularly because of dehydration and the tendency of journalists to self-medicate with alcohol, caffeine, and high-sugar foods…

Forty-one percent of the subjects said they drank 18 or more units of alcohol a week, which is four units above the recommended weekly allowance. Less than 5% drank the recommended amount of water.

However, in interviews conducted in conjunction with the brain profile results, the participants indicated they felt their jobs had a lot of meaning and purpose…

There were two areas however where the journalists rated well:

Unfortunately the “ideas” they deal with are most often progressive agendas and the “abstraction” applied generally involves creating narratives that use the “sophisticated problem-solving” skills generally referred to as lying - which involves making facts up out of whole cloth as well as telling half-truths.

And for clarification of “what’s important” to journalists, see discussion re. “abstraction” above.

The take away from the article concludes that, for journalists, “the meaning and purpose they attribute to their work contributes to helping them remain mentally resilient.”

But of course: without the “meaning and purpose” all of their lying would go unappreciated and their moral superiority be unnoticed.

Journalists compete with “educators” and SJW types for bottom of the barrel degrees.

Thankfully for the j-types, no one can be more stupid than a SJW degree holder.

Someone needs to expand the study to politicians, Congresscritter in particular.

It should concern people that a man suffering from brain tumors and likely even early dementia could, granted with some personality changes, still manage to seem functional compared to many others who are apparently perfectly healthy.

Actually, a study reported by the WSJ in the early 90’s ranked various degrees. The study evaluated the intelligence of those majoring in those degrees based upon ACT/SAT scores. It also evaluated the academic rigor of the instruction.

Stupid people are, well, stupid. They can’t observe well. They can’t learn. Most journalism is written at a 5th grade level at best. Logical inconsistancies and outright falsehoods are standard in their output. We tend to think that they are merely liars but it is not that simple. They actually believe much of their bilge.

Take a simple concept like tax cuts in an overtaxed economy. Journalists are incapable of comprehending the simple concept that tax cuts will stimulate growth. They haven’t figured it out since Kennedy or Reagan and they never will.

Like most stupid people they exaggerate their own self-importance while being unable to string a coherent paragraph together. They think their drivel is brilliant and cannot be convinced otherwise. Yes. Though I agree with the stated premise, there is a certain irony there.

The good looking, pampered, articulate MSM creatures that flash across our screens are usually shallow and lack any depth of thought. The world has always bent to their will and they have experienced zero adversity for most of their lives. It shows.

My first thought.
Oh the irony!

Agreed. I suppose if they have captured about half of 277 million, plus “outside” funding, they can survive.

However, I suspect that without these sources and aggregators, and the Truth being unearthed, the Political-Media Complex wouldn’t need to ramp up its Truth-killing propaganda machine, as if it’s an unsustainable cycle of Truth vs Lies that keeps intensifying.

Nolte: Meet a National Reporter Who Does Not Know How Fire Exits Work

I agree with the thingy, the idea, of the article, but I cuwnt read it because it had big words and things. You know what i meen ?

Initially, it's the publishers and editors in the dark Media who hire these journalists (many of them young) and corrupt them with the bonehead ideas of the Left.

The allure of fame, fortune, and social status is what appeals to these journalists.  They soon drink in the culture of ripping apart corporations, government, religion, and America for kicks.

Do journalists drink more alcohol than your average upwardly mobile millennial in a big city?  Probably not.  Alcohol merely lubricates the social interactions and makes the journalist part of their team of Social Justice Warriors with a keyboard.

The progressive agenda cannot stand the daylight of reason because the journalist stories are meant to provoke knee-jerk reactions and feeeeeelings.  Their purpose is to excite the Trump-hatred drug in the bloodstream -- and make it habit forming.

Unfortunately for CNN, with its recent 20% loss in viewers, it looks like people are gradually being detoxed from this hate-Trump addition or TDS.  Perhaps some are finding relief in the doctor-recommended Trumpazine.

Maybe victim education is finally getting through thanks to the helpful TDS poster published by the Center for Leftist Depression.

Scott Adams of Dilbert fame has posted a cool video and podcast giving instruction on how to "exorcise" (my word) the TDS ghost from those afflicted:

Episode 69: How to Guide a Victim out of Trump Derangement Syndrome (TDS)

Perhaps, but mostly they are Partisan Media Shills, who just hope their audience remains gullible, lazy, low-info, or suffering from locked-in syndrome. Thanks NOBO2012.